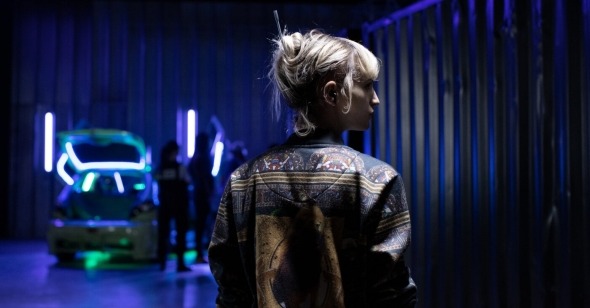 One might emerge from a screening of Titane with a heightened awareness of the mundane ways that our bodies routinely collide with machinery: a daily commute inside a stainless steel and fiberglass tube hurtling underground at 45mph; an electric toothbrush vibrating inside the mouth; fingers striking against the metal and plastic of a laptop to tap out a sentence. Throughout Julia Ducournau‚Äôs second feature, bodies slam and twerk against car parts, are punctured with iron rods, or have their metal piercings tugged on‚Äîhard. Ducournau‚Äôs gift for gut-churning gore has only heightened since the bloody cannibalism of her 2016 debut Raw. With Titane, she shifts her focus away from teenagers with flesh-eating fetishes to a woman who rejects corporeality altogether, instead harboring an appetite for all things automotive. Ducournau‚Äôs latest film starts out hard but strips itself down to a level of softness and sentimentality, examining the armors we establish to shield ourselves from the world, and what it takes to transmute our steely exteriors into something more malleable.

Titane is not always pleasant, but it is more than just a vehicle for revulsion. The film follows Alexia, a stone-faced dancer who comes alive during her gigs at auto shows, where she writhes atop a Cadillac decked out with a suggestive fiery decal. Ducournau casts newcomer Agathe Rouselle in the role, which precludes audiences from bringing any preconceived ideas about who Alexia is, or who she might become. Her choice pays off‚ÄîRouselle‚Äôs perpetually furrowed brow and dark eyes keep us at a distance but her impressive physicality (she‚Äôs a dancer and a model herself) holds our attention. She‚Äôs an extension of the film‚Äôs color palette, a fun house of infrared and ultraviolet that manages to be both dark and light at the same time, and we never know what she‚Äôll do next.

Alexia‚Äôs passion for cars is likely the result of a metal plate she had put in her skull (en titane, or titanium, as the doctor explains) after a car crash she may have caused as a young girl trying to distract her aloof father (Nocturama director Bertrand Bonello) behind the wheel. Both of Ducournau‚Äôs films open with car accidents, and two of the character names from Raw, Alexia and Justine, are carried over into the universe of Titane as well. Ducournau credits this to her ‚Äúsentimental‚Äù side, saying she considers the two films as part of a ‚Äúcontinuous gesture.‚Äù The kickoff car crashes get the Cronenberg comparison out of the way early: Ducournau is certainly a self-proclaimed inheritor of the body horror master‚Äôs sensibility. But while there are plenty of automotive analogies to be made between Titane and Crash, for example, this is a film that‚Äôs perhaps more concerned with redemption than Cronenberg‚Äôs, seeking solace for its characters as opposed to the endless drive toward eroticism and morbidity.

Ducournau is on a quest for lightness with Titane, moving away from the hopelessness of Raw and toward something resembling love. The film‚Äôs first half establishes Alexia as an alluring, but monstrous character‚Äîthe metal chopstick she uses to hold up her hair is her weapon of choice, one she whips out to murder an adoring male fan by puncturing his ear canal as he sticks his head in her car window to faire la bise. Coming out of nowhere, this episode may read as a left-field girl-power moment at first, something Alexia was pushed to do after one too many interactions of this nature. Ducournau refuses to clarify her reasons for killing in cold blood, however. While the film thus far has been relatively grounded in reality, here we enter another dimension. The scene that follows shows Alexia being seduced by, and subsequently having rough sex with the flaming Cadillac she‚Äôd mounted previously. The Caddy lowrider‚Äôs hydraulic system kicks into gear as it bounces up and down with Alexia in the back, seatbelts tightly wound around her arms as she moans with pain and pleasure. Alexia is looking for that special someone, it seems, but‚Äîas the previous murder scene makes clear‚Äîshe‚Äôs more interested in motors than men.

As Alexia‚Äôs body collides with machine, it yields an unexpected product: pregnancy. As in Raw, Ducournau explores the ways that our bodies enact hostile takeovers‚Äîfrom brutal rashes to unwanted desires for human flesh. Pregnancy picks up on this thread, as Alexia declares war on her unwanted bump‚Äîfirst by trying to abort it with her chopstick. She continues to punch, scratch at, and eventually tape her growing stomach down in an attempt to make it disappear, but it continues to grow and show signs that it‚Äôs inherited a few traits from its father‚Äîinstead of blood, Alexia sees motor oil when she reaches her hand between her legs.

Alexia‚Äôs murderous side is ignited again when she starts seeing Justine (Garance Marillier), a fellow dancer, whom she kills mid-embrace before going on to execute three of her roommates in a wild series of attacks set to an Italian pop song from the ‚Äô60s. While its suspenseful, kinetic energy is entertaining, it feels almost like a parody of the dissonant music Tarantino might use to score his most violent montages. The scene also serves to problematize the audience‚Äôs interpretation of her first murder‚Äîwhat drives Alexia to kill? Perhaps it‚Äôs a reaction to romantic feelings, or maybe a simple thirst for carnage. Her motivations aren‚Äôt fully fleshed out, which leaves an ambiguity that‚Äôs more frustrating than intriguing. The confounding scene fits in with several other moments and music drops that feel like they‚Äôre pulled from the ‚ÄúCannes canon‚Äù (most notably, Rouselle joins the growing list of actors voraciously eating spaghetti alongside Ad√®le Exarchopoulos in Blue Is the Warmest Color and Sandrine Bonnaire in √Ä nos amours). What these moments are meant to signify beyond an attempt to appeal to the European art house crowd is unclear, and ultimately feel like a detour around plot and character to quickly arrive at some undeserved ‚Äúoohs‚Äù and ‚Äúaahs.‚Äù

This killing spree, which includes burning down her house with her parents inside it, prompts the events of the film‚Äôs second half. Alexia goes into hiding by posing as Adrien, the long-missing son of a provincial, hyper-masculine firefighter Vincent (Vincent Lindon). In the next violent set piece, Alexia bashes her nose into a porcelain sink in an attempt to disguise herself, and the film only gets increasingly grotesque from here. As Alexia becomes Adrien, she has to hide her breasts and growing belly, aggressively wrapping an ace bandage around her upper half, which eventually causes deep cuts and bruises. As she assimilates into the all-male world of the firehouse, Ducournau underlines the mutability of gender‚Äîthe hardness she‚Äôs developed as a woman translates easily into masculine stoicism. In the next centerpiece needle drop, the firemen dance uninhibitedly to ‚ÄúLight House‚Äù by Future Islands, an American band known for blurring the line between feminine and masculine with the lead singer Samuel T. Herring‚Äôs hard, grizzled voice contrasting with their delicate and soulful synthpop. An erotic dance sequence Alexia later performs at an otherwise excessively macho work party straddles the line between male and female, as she unsettlingly and seductively moves her hips and strokes her body to Lisa Abbott‚Äôs slowed-down, lounge version of the American folksong ‚ÄúWayfaring Stranger,‚Äù as her dumbstruck coworkers watch on (a more traditional banjo rendition of the song opens the film).

Alexia‚Äôs movement toward masculinity improbably brings out a certain gentleness in her, a quality that‚Äôs largely achieved through her relationship with Vincent. Her surrogate father appears to be the embodiment of unbridled male energy, injecting steroids into his bruised body before his spartan workouts. Below the hard surface, Vincent is a man riddled with grief over his lost son, and his relationship with Alexia allows him to express joy again, whether it‚Äôs by dancing to ‚ÄúShe‚Äôs Not There‚Äù by the Zombies or twirling Alexia around to Future Islands. It seems he even gets through to Alexia, who decides against murdering him, and even grows to need him a little bit in the end.

The ambiguity and musicality of Titane evoke the era of music videos, where the more abstract and detached from a legible narrative they were, the cooler they were deemed, like Michel Gondry‚Äôs projects with Bj√∂rk or Hype Williams‚Äôs work with Missy Elliott. Both directors are great filmmakers in their own right, and Ducournau is perhaps more their inheritor than Cronenberg‚Äôs. For a film to serve more as a medium for ultra-stylized lighting, idiosyncratic fashion, and boundary-pushing mise-en-sc√®ne than for meaning doesn‚Äôt qualify it as empty, though Titane may push the limit for some. Ducournau has instead made her very own genre of monster movie, one that literalizes the structures we build to keep others out. Ducournau wants viewers to both recoil from and connect with her characters as their bodies and boundaries are broken down and reconstituted before our eyes.