The Girl and the Spider 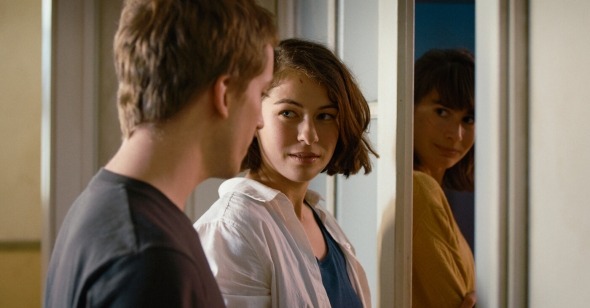 Putting It Together
By Lawrence Garcia

Ramon and Silvan Zürcher’s The Girl and the Spider opens with a view of an apartment floor plan. Across the film’s 98-minute runtime, as we watch the corresponding apartment space subjected to all manner of modifications, the image lingers in the mind as an abstraction, a measure by which we are able to comprehend, and evaluate, the filmic world. A schema that can find no direct picture in the film’s reality, it nonetheless conditions our perceptions and understanding—that is, all that we are able to recognize, think, and perhaps even imagine—preparing us for what is to follow. Like their auspicious 2013 debut The Strange Little Cat—which Ramon wrote, directed, and edited, while Silvan served as producer—The Girl and the Spider is a film of formal patterns and conspicuous ruptures, of precisely choreographed movements and deliberate deviations. In short, it is a film of rules and rules broken. That the Zürchers follow their opening image with the sight of a jackhammer penetrating concrete tells us all we need to know.

The plot is easily enough summarized—up to a point, anyway. Over the course of two days and one night, Lisa (Liliane Amuat) is moving into a new flat with the help of her ex-roommate Mara (Henriette Confurius), her mother Astrid (Ursina Lardi), a middle-aged handyman Jurek (André Hennicke), his assistant Jan (Flurin Giger), and a host of other friends and acquaintances. Immediately, complications pile up. Jan is transparently drawn to Mara, but apart from her indifference to him, she also harbors apparently unresolved feelings for Lisa. Despite having just met, Astrid and Jurek develop a clear liking for each other—though their flirtations get interrupted, often rudely, by Lisa’s barely concealed filial hostility. Back at Lisa and Mara’s old apartment later that evening, where the former is throwing one final house party before her move, Jan gets involved with one of their downstairs neighbors. As the second day approaches, connections proliferate. Throughout all this, the Zürchers repeatedly return to one notable formal strategy: building up a link between two people across a given scene or shot, then punctuating it by cutting to a heretofore unseen observer. Most every image thus gets restated in terms of a previously unacknowledged perspective. Every image is spun into a complex web of subjectivity—the implication being that no matter what, something always “escapes” our immediate apprehension.

In this respect, The Girl and the Spider does not depart significantly from The Strange Little Cat, which likewise transforms a cramped domestic scenario into an overwhelming symphony of sensation. It has a similar vision of a world on the verge of a nervous breakdown, dense with visual-aural information. It features continual buildups of pressure—whether physical, mental, or emotional—which are then released into classically scored passages of “pure” observation, where the camera, untethered from any human perspective, takes stock of the nonhuman elements (inanimate objects or animals) left in the wake of the film’s entropic whir of activity. It also includes occasional anecdotal monologues that digress from the main narrative for phantasmagoric interludes. Early on in The Girl and the Spider, we find this in a story Mara tells about a bike trip she once took with Lisa. After losing sight of her, Mara sat down by a fountain and almost fell asleep, only to then find herself surrounded by children playing all around her—until they quickly disappeared, just as unexpectedly as they arrived. By the end of this impromptu reverie, Mara finds herself back in the midst of the hectic move, and Lisa’s flash of affection towards her, precipitated by the story, quickly gives way to annoyance.

Like similar passages in The Strange Little Cat, the scene moves compellingly between imaginative (re)construction and subjective limitation—between the graceful expression of Mara’s out-of-time reminiscence and the sharp shock of being recalled to present-tense reality. For the most part however, the Zürchers are unwilling, or unable, to strike a similar balance in The Girl and the Spider, stressing the characters’ blithe aggression over their oddball flights of fancy in a way that’s eventually numbing rather than incisive. To be clear, the issue is not that the film is mannered or unnaturalistic, though it is those things: for a time, it’s even exciting that Mara, apart from being a distinctly unhelpful mover, is so maddeningly unpredictable, frustrating our attempts at making sense of her personality. But the value of such an obtuse approach is only as good as what it accomplishes or reveals, and Mara’s capriciousness, like that of most every other character in the film, fits only too neatly in a repetitive pattern of destructive conflict. Similarly, the film’s gestures toward an expressionist fairy tale—a downstairs neighbor who, like a kind of succubus, only emerges at night; an elderly woman who at one point appears like a witch in a nightmarish summer storm—are all but subsumed into the vacillating character dynamics.

For all the Zürchers’ emphasis on the primacy and contingency of perception, the film’s movements are not ultimately driven by conflicting visions of the world, but by conventional patterns of behavior, largely rooted in sexual desire. Despite its suggestive feints toward a complex network of mental relations, The Girl and the Spider tends to fall back on a series of emotional duels that are, by the end, simply monotonous. Only in its closing passage, which follows a previously unseen woman, whom we know only by reputation, do we finally witness a limited, subjective vision expanding thrillingly into the vast unknown.

Throughout the film, it is clear that the Zürchers are interested in restoring a sense of strangeness and wonder to everyday existence—exploring the fact that we are able to not just comprehend the world but also speak about it to each other through our bodies, through language. (As one character says, it’s “as if a secret force were holding everything together.”) What is less certain is how far their attempts to underscore our phenomenological limitations can really go towards achieving this goal. It is one thing to recognize the gaps in one’s web of subjectivity—to point out that it could, so to speak, always be finer—but it is quite another to contend with the astonishing fact that we can even speak of a “web” at all, let alone of its form or structure. The Girl and the Spider mainly falls back on the former, highlighting the gaps of our experience, thereby affirming—repeatedly, and, in the end, rotely—the finite bounds of our intuition.

Across two features, the Zürchers have demonstrated their adeptness at taking things apart—neither their technical prowess nor their distinctive command of space and movement is in question. But what The Girl and the Spider lacks, ultimately, is a deeper sense of that mysterious “secret force… holding things together.” For all its formal rigor and dexterity, the film falls just short of conveying the singular pleasures of construction.