I Want to Talk About Duras 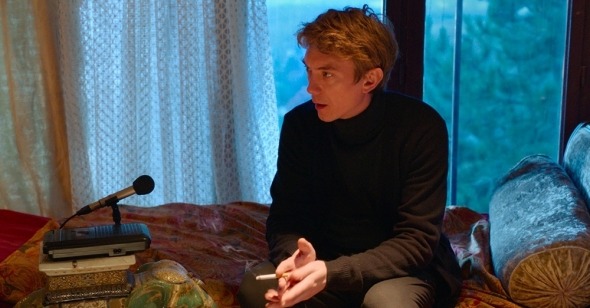 The Lover
By Mackenzie Lukenbill

NYFF 2021:
I Want to Talk About Duras
Dir. Claire Simon, France, no distributor

Claire Simon’s I Want to Talk About Duras opens like a play, its dramatis personae spelled out on a black screen. There are three players: Michèle Manceaux, a journalist for Marie-Claire; Yann Andréa, her young neighbor in Neauphle-le-Château who has called upon Manceaux to conduct his interview; and Marguerite Duras, famous author and filmmaker, Andréa’s much-older lover, and Manceaux’s longtime friend. Manceaux and Andréa are portrayed by actors; Emmanuelle Devos and Swann Arlaud, respectively; Duras is not. There is no need—she is present in every line of dialogue. The other characters quote her texts. Scenes from her films and interviews contextualize their discussion. We even hear her directly off-screen: repeatedly ringing the doorbell of the home she shares with Yann in order to interrupt the interview, shuffling and stomping downstairs, her reflection caught for a split second in the window. Yann reacts to this rummaging as if Duras is a specter in a haunted house. The color drains from his already petrified face and he defeatedly gestures toward the source of the distraction.

Andréa has solicited Manceaux and her tape recorder for a private exorcism, not for a published piece (though the transcripts of the tapes were eventually published in 2016, and that text provides the basis for this film). At the time of the interview in 1982, he had been in an unorthodox companionship with Duras for two years, though he originally started sending her passionate, declaratory letters after attending a screening of her 1975 film India Song at which the filmmaker was present; he in his early twenties, Duras 65. The relationship has clearly been weighing on Andréa, who continually refers to himself as homosexual, despite the physicality that Duras requires of him. Arlaud—here resembling an anemic Martin Short—portrays Andréa as constantly shrinking, folding in upon himself, his cigarette consumption his only action that feels furtive and alive. When Manceaux presses record, he immediately broaches the source of his anxieties: il voudrait parler de Duras.

In France, the film is titled Vous ne désirez que moi, translated in the opening credits as You Desire Only Me. I Want to Talk About Duras implies the absence of the film’s subject, while the other is a quote from Duras to Andréa, repeated by him late in the film. An overbearing phrase, certainly, but not a melodramatic one: there is no tout or seul. Duras imagines desire as a quantifiable, strictly monolithic commodity. Andréa is Duras’s and Duras is Andréa’s, and therefore any feeling that exists outside this regulation is null and void. Passion is, as Duras says and Andréa dutifully repeats, “death.”

Andréa’s recollections suffer from a sort of chronic hauntology—he keeps mixing up tenses. Is the story he is telling in the past? Is it his current state of existence? Is he trapped this way until either he or Duras dies? (He says the relationship has driven him to a suicide attempt, and Manceaux, with a smile both gentle and irksome, states that he “cannot” bring this up without expanding upon it.) This confusion also feels as though it was inflicted by Duras, whose literature is often marked by temporal and identity shifts, where pronouns and perspectives are knottily intermingled. Andréa also admits that Duras frequently refers to him in the feminine, which he loathes. He is wary of the porous boundaries between Duras’s fiction and her life, and explains that he was crestfallen to learn that her name is a nom de plume.(His omissions are also notable, if perhaps tangential: Andréa was born Yann Lemée; his surname, the name of his mother, was assigned to him by Duras.)

The interview unfolds over two days in the confines of Duras’s cavernous, earthy wood-and-glass home; this staged set for Devos and Arlaud’s characters is clearly meticulously modeled on images of Duras’s house in her film Nathalie Granger and Michelle Porte’s documentary Les lieux de Marguerite Duras. The two sessions are filmed in single Steadicam shots—the only edits occur when a character leaves a space. The actors even act as their own gaffers, moving from their seats to turn on practical lights as the sun falls.

The camera is in constant volley between Devos and Arlaud; we are never sutured to the point of view of either Andréa or Manceaux (who during the interviews listens dutifully and occasionally pries apologetically), except for a brief, quiet interlude between the two interviews where Manceaux walks home for the night. She pours herself a drink and is seemingly haunted by brief shots of inked sketches depicting physical and sexual acts between Duras and Andréa. Apart from this section we aren’t given a sense of what Manceaux thinks of what she is being told—she is shown occasionally scribbling notes, but the image of her notepad is blown out by sunlight in the frame.

Ultimately it is Duras who is rendered most memorably, through both the discussion and supporting archival footage. It is startling just how literal Duras can be. Her willingness to mold Andréa is never relegated to subtext. When Andréa speaks of being cast by Duras in her 1981 film Agatha and the Limitless Readings, he says that she told him that, by sticking him in the frame of her camera, “I’ll uncreate you to create you.” This is followed by striking footage of Duras directing Andréa, commanding him in abrupt, mortifying barks, rapping the papers in her hand against the camera and threatening to place Andréa in a chair, as if he were a child in time-out who can’t follow direction. “NON! Incroyable... Do not look at the sea! The camera is beginning to make you uncomfortable now, so look at it!” Duras is also shown at a reading of her then-latest work, The Malady of Death, in which a gay man searches for passion with a woman. Men devoid of desire for women, Duras states with certainty, are “dead.” When Manceaux asks Andréa if he believes this obvious overreach is true, he says that it is true for him: Andréa lives by the prescription of Duras’s prose. “She has language,” he says, “and she took away the language I have.” However rhizomatic Andréa’s desires were, they have been frozen in the rigidity of Duras’s language. She has written it, thus it is so.

While watching the film, I thought of Claire Simon’s remarkably warm Mimi (2003), also based entirely around a confessional dialogue between two friends, Simon and a middle-aged lesbian named Mimi Chiola. That film is structured as a rambling expedition through Nice and the rural Alps, where sites in the landscape illuminate Mimi’s memories. The villages, farms, and train stations are inextricably tied to Mimi’s recollection. Andréa, meanwhile, is only shown enclosed in Duras’s home—a space that she was notoriously obsessive about, and speaks of being filled to capacity, saturated by herself and her fictional woman, in Michelle Porte’s documentary. How could he possibly speak about anything but Duras? “Tonight, I see you again, you whom I didn’t know,” Duras wrote about her first meeting with Andréa in L’Été 80. “This bedroom could have been the place where we loved each other, so that’s what it is, the place of our love.” And so it’s settled: Andréa will stay with Marguerite until her death.