All About My Sisters 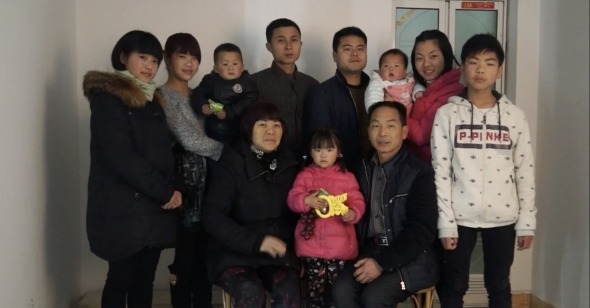 Our Scars
By Forrest Cardamenis

All About My Sisters
Dir. Wang Qiong, China, Icarus Films

One should always be hesitant to proclaim a film as part of a new “movement,” but upon watching Wang Qiong’s debut documentary All About My Sisters, I cannot help but wonder if Chinese film is entering a new stage in history. For two decades, many of China’s greatest filmmakers have trained their cameras on the signs—urban, architectural, countercultural—of the nation’s rapid economic development. China is well on its way to surpassing the United States as the world’s largest economy, and its working- and middle-class are no longer plagued by shortages of food, water, or medicine. Urban migration has not simply improved standard of living, however; as Jia Zhangke’s Swimming Out Till the Sea Turns Blue demonstrates, it has also alienated China’s youth from its roots. Whether it is a movement or a blip on the radar, All About My Sisters demonstrates a new tendency focused on oral history and memory as a means of retaining or recovering the past.

Because documentaries lack a script that can be reviewed ahead of production and tend to have smaller audiences, they enjoy relatively lax oversight in China. That makes the intimate family portrait or interview a particularly effective way to say something that would never be approved in a script awaiting a green light. In Swimming Out, Jia asked some of China’s greatest novelists to recall difficult times in the nation’s history—including the food shortages of the post-war years and the Cultural Revolution—while Wang Bing asked survivors to relate stories of reeducation camps of the ’50s and early ’60s for 2018’s Dead Souls. Now, the 29-year-old Wang gives China’s one-child policy a similar treatment by training her camera on her own family, especially her younger sister Jin, the third girl in as many births, who survived an attempted abortion and was taken in by an aunt and uncle before eventually making her way back to Wang’s family as a teenager.

It’s rare for a twentysomething in China, especially a woman, to have “sisters,” plural, because the one-child policy led to sex-selective abortions and infanticide at rates that have skewed the nation’s gender ratio among young people by several percentage points. “Sons are always there,” the filmmaker’s mother explains to her. A daughter, she says, will be eventually charged with raising her own children and taking care of her new family, but the sons can always come back if something happens to his parents. This is neither a full nor particularly convincing explanation: want of a male heir is common across patriarchal cultures (i.e. most of them). But then again, no explanation could possibly undo what was done to Jin, whose psychological scars are visible from the first scene, when she talks to Wang Qiong and repeatedly refers to their birth parents as “your parents,” noting the preferential treatment her siblings receive. Lest we suspect Jin is succumbing to confirmation bias and merely perceiving harsher treatment, others, including Sifan (the son the family had after four more tries) are quick to echo the sentiment, and Wang’s camera often picks up examples of her father’s favoritism, be it in a line, a reaction, or his attitude. Plenty of times we see the father scold and berate Jin for something small, yet he barely hesitates to give Sifan money because, in the son’s words, he “just needs it.”

These scenes are remarkable for the clarity in how family members speak of and about Jin and how they act around one another. In an interview conducted ahead of the film’s screening at the Rotterdam Film Festival, Wang revealed that she convinced her family to let her film them by framing the project as homework, and only when she began to edit after seven years of filming did she decide that she would like audiences to see it. That means neither subject nor filmmaker felt the need to hold back or present themselves more favorably in front of the camera, allowing for a convincing and honest portrait of her family.

All About My Sisters also benefits greatly Wang’s formal pluralism, which helps us perceive the role of Wang’s camera in the narrative. Much of the time, Wang acts as a fly on the wall, content to observe her family through moments good and bad, of love and of conflict, or to more idly converse with her older sister and mother about nothing in particular. Sometimes these moments will unexpectedly turn into moments of confrontation, however, and Wang will begin to ask difficult questions to take advantage of someone’s vulnerability or candidness. Other times, however, she will ambush her subjects so we can see their shield, as when she asks her dad about Jin’s birth and abandonment. “Didn’t your mother already tell you?” he snaps. But Wang is not interested in hearing the scripted memory; she wants to hear what her dad remembers and how he feels when he has nothing to fall back on. There are also more formal interviews, readily identifiable because they are filmed on a tripod rather than Wang’s handheld camera. It goes almost without saying that nothing will play out in the presence of a visible camera quite like it would without one, but rather than hide from this fact, Wang tackles it head on, exposing the different faces of her subjects rather than trying to reach the “real” one.

In one of the formal interviews, Wang’s uncle speaks of working for the local government as an enforcer of the one-child policy by gathering women for sterilization (sometimes for violations of the policy, other times simply to meet quotas) or tearing down the homes of violators. More frequently, she relates the stories of victims. A particularly memorable interview sees a father remember his would-be children—one a late-term aborted female fetus, the other a live female baby—that he left in the woods to die. Asked if he ever thinks of these children, the father tearfully replies, “Of course I do.” Horrifying as these stories are, their perpetrators understand themselves as victims. The one-child policy was strictly enforced in the ’90s while late-term, sex-selective abortion and infanticide went largely unpunished; that the latter were so common was a result, intentional or otherwise, of cultural incentives and law enforcement practices. But even as Jin’s parents see themselves as having been coerced by misfortune and the state into doing something awful but commonplace, Jin sees herself as unwanted, victimized at birth by those who ought to care most for her.

Unlike the more sweeping and investigative One Child Nation, All About My Sisters does not aspire to be a comprehensive examination of the one-child policy; Wang has even backed away from discussing the policy in interviews. Text occasionally appears on screen to provide context (for example, it notes that the policy was most strictly enforced in the mid- and late-’90s), but there is no indication of why the policy was initially implemented, of the numerous exceptions (rural parents and ethnic minorities were permitted two without penalty), nor of the disaster it has led to today, when the nation’s aging population is on the verge of causing problems with no easy solutions. Instead, the three-hour documentary balances confrontation and conversation with simple day-to-day interactions, although we quickly see how frequently even both mundane and joyful moments are haunted by the past.

Late in the film, When Jin is to get married, Wang informs us that the brothers of the bride’s mother are the most honored guests at a wedding, which creates a dilemma for families of fostered children: is it the uncles of the birth mother or the foster mother who most deserve that honor? We also learn that Jin’s husband, Sui, is neither the nicest nor most successful of men and is treated coldly by Jin’s birth parents, who wish for her to do better. But for Jin, who has never felt like she belonged to her birth family, marriage offers an opportunity to escape that family and start her own—although even she does not anticipate how her own past will complicate her feelings toward her firstborn, a son. Long after the end of childhood, family trauma reproduces itself, causing friction and exacerbating existing conflicts. Sifan tells Wang that Jin—his favorite sister, by his own admission—should divorce Sui, who will make her unhappy, and should then return home. “This is all his fault,” he claims. Wang contends, “We are all part of it, no one is innocent. My fault is that I didn’t find a solution. You didn’t help me,” she continues. “This is your fault. Dad is abusive and hurts everyone. That’s his fault.”

At the end of the film, Jin leaves Jiangxi with Sui for an unnamed “big city far away,” while at home her birth parents watch a TV announcement of the end of the one-child policy. But this is not a hopeful ending or a new start. It is unclear when or if Jin and Sui will send for their own child, who does not make the move with them. Relocating to the city also symbolizes a break from the nation’s history—an entrance into the global, but also an escape from the historical. The end of the one-child policy, meanwhile, means only that overpopulation has become less problematic than China’s increasing median age, which is growing higher than in almost any other nation—so quickly that the country could soon lack sufficient resources to care for its elderly. Jin and Sui may yet succeed in their new life—and China may yet find a way to mitigate the difficulties caused by an aging population—but yesterday’s scars are unlikely to ever fully heal.