Swimming Out Till the Sea Turns Blue 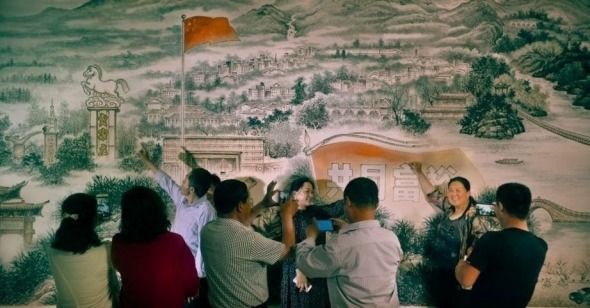 Keepers of the Flame
By Forrest Cardamenis

Beginning with 1997’s Xiao Wu, Jia Zhangke has been known for chronicling his country’s urbanization, his early adoption of digital video, and his patient deployment of long takes. Yet where many of his one-time peers of China’s “Sixth Generation”—Lou Ye, He Jianjun, and Zhang Yuan, to name a few—are less famous than they once were, Jia has only become more renowned, with his more recent films embracing the melodramatic undertones that were once subordinate to Jia’s documentarian tendencies. It’s a bit ironic that Jia’s stature owes more to the documentary quality of his fiction films than to his actual documentaries, of which Swimming Out Till the Sea Turns Blue is his fifth. Swimming Out may not have the aesthetic boldness of Jia’s best work, but it illuminates the proximity of fiction and nonfiction in his oeuvre and doubles as something of a directorial mission statement, highlighting the role of the artist in writing and preserving history.

Jia has done as much as any director to blur the boundary between “fiction” and “documentary,” but the distinction remains significant in China, where authorities must vet and approve scripts before a production can officially begin. Since documentaries are not scripted and can often be shot with smaller crews, there are fewer hurdles for approval and a lower risk of getting caught making a film under the radar. This systemic leniency toward documentaries is one reason a director such as Wang Bing can make films that are so critical of his country (another is that China understands Wang’s films are seen only by a very small number of international viewers, and a crackdown might result in increased notoriety and attention, as has been the case for Iran’s Jafar Panahi). It’s fair to wonder, then, if Jia’s shift back to documentary with Swimming Out—his first in a full decade—is motivated by a desire to make the sort of political statements that had become more muted in Mountains May Depart and Ash Is Purest White.

Jia’s relationship to the censorship apparatus is more complex than Wang’s. He was officially banned from filmmaking between 1999 and 2004, but he made Platform and Unknown Pleasures regardless and established his reputation abroad. Despite defying the ban, his next two films, 2004’s The World and 2006’s Still Life, were approved by the Chinese Film Bureau, and there was no professed or evident artistic compromise on either, although the latter was all but buried upon release in the Mainland. After the July 2009 Ürümqi riots, Jia withdrew his short film Cry Me A River from the Melbourne International Film Festival because, in his words, “attending the same event with [Uyghur dissident] Rebiya Kadeer contains political meanings. It is emotionally intolerable and practically inappropriate.” (The New York Times reported that Jia was pressured by authorities to withdraw; Jia has stated he had no contact with authorities whatsoever and that the decision was entirely his own.) With A Touch of Sin, Jia successfully fought off requested changes ahead of a Cannes premiere, but the film was never released in China.

All of this is to say that it is easy to watch Swimming Out Till the Sea Turns Blue with an eye on what can and cannot be said. The film consists primarily of interviews with three of China’s most acclaimed and popular novelists discussing their childhood, the Cultural Revolution, their careers, and Ma Feng, a literary forebear who also implemented a filtration system that helped plants flourish in salty soil. Feng died in 2004, but he is felt throughout the film, in the reverence of his successors and in brief interviews with other residents of his hometown, including his daughter, as well as in brief interludes of farming and harvesting between chapters, each punctuated with a quote or poem by a rural author. Each of the film’s primary interviewees is about 10 years younger than the previous; the oldest and the film’s first subject, Jia Pingwa (no relation to the director), was born in 1952, just a few years after the end of the Chinese Civil War, so their successive accounts demonstrate how quickly things changed from decade to decade.

In what is probably the film’s sharpest critiques of the Communist Party and historical living conditions, Jia Pingwa recalls growing up in a 22-person extended family with just a single wok, and how his father was tarred as a rightist based on a reclassification of a ’40s KMT meeting that he never even attended. That guilt by association spread to him personally, rendering him all but ineligible to join the military and unable to find an adequately paid job.

In a less explicit incident, Yu Hua (whose experimental beginnings and later embrace of more commercial forms seem to parallel Jia Zhangke’s career) speaks of the “peace and joy” that defined the atmosphere of Beijing University when he enrolled in October 1989. It is tempting to note the proximity to the government’s crimes during the Tiananmen Square protests, suppressed just a few months earlier, and point to the avoidance of the topic as evidence of social taboos or outright censorship in China, but Yu has previously written about the protests and noted how quickly society reverted after the tragedies at Tiananmen Square. It’s more likely that Tiananmen goes unmentioned here because Yu, at this point, is simply narrating his career path, which at that point was already off the ground.

Instead, it is rural life that shaped both Jia Pingwa and Yu, as well as Liang Hong, the only woman among the interviewed authors and, relatedly, the youngest of them. The film is concerned accordingly with the erosion of rural culture in light of economic growth and urbanization (as in A Touch of Sin and Mountains May Depart) rather than with Communist Party injustices. Alongside the aforementioned criticisms of the CCP and various initiatives of the Cultural Revolution are sequences that reflect growing acceptance of the costs of China’s development. Early, Jia includes shots from Platform and follows them immediately with a present-day look at the same place. A mural of the city in Jia Family Village (again no relation) seen in the film’s 1979 opening, for example, has been replaced by one depicting skyscrapers and cell towers. Tourists now pose for pictures and wave their mobile phones where peasants had passed around cigarettes in Jia’s earlier film. A street in Fenyang that consisted of a row of drab, dilapidated, buildings on either side, a single car, and street sweepers, is now a major thoroughfare bustling with traffic and shoppers. The displaced workers and residents of Jia’s 24 City and the alienated youth of Unknown Pleasures are absent as we follow this Fenyang boulevard to a literary festival.

Yet acceptance is neither praise nor condemnation. The film concludes with a pair of quiet but fecund moments. In the first, the teenaged son of Liang Hong discusses knowing rural China primarily through his mother’s books and recalls faint memories of his grandfather from early childhood in Henan, a rural province in central China. He speaks, Bose noise-canceling headphones adorning his neck, in simple but clear terms of how his grandfather may not have had enough to eat growing up. The juxtaposition between food insecurity, discussed but not seen, and high-tech gadgetry, seen but unremarked upon, is an extraordinary distillation of what has changed in China in just two generations, and Jia, from behind the camera, punctuates it with the perfect question: “Can you introduce yourself in Henan dialect?” He can’t, of course, and it registers as an example of loss of the very rural culture Jia Pingwa had spoken of earlier. In the second moment, Jia returns to an earlier scene on the shore of the Yellow Sea for one final shot. Yu reminisces about his childhood, when “the sea was yellow, but the textbook said it was blue,” and how he wished to swim out until it turned blue. The textbooks were wrong, but as we plainly see in the background of the shot, the sea is blue today.

Both scenes demonstrate the role artists play as keepers of history, links to a past that any state interested in controlling its populace and rewriting a more flattering history cannot be trusted to author accurately, if at all. More than that, they remind us that politics and progress are rarely simple or straightforward affairs. It’s easy in the United States to think of China as a talking point or a scapegoat for political groups rather than as a place with history and culture even longer and more complex than our own. Jia has long sought to capture that complexity, and Swimming Out Till the Sea Turns Blue reminds us that he is not unique in doing so.