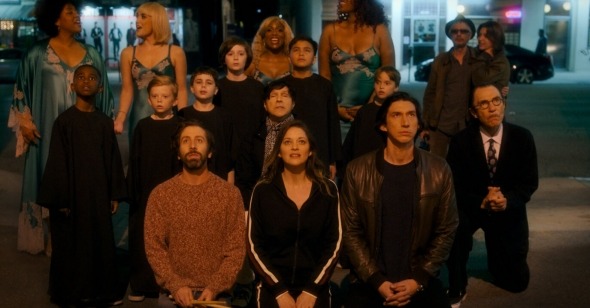 We Do Belong Together
by Juan Barquin

“So, may we start?” filmmaker Leos Carax asks Ron and Russell Mael at the opening of their new musical Annette. The duo, known best as Sparks, then proceeds to introduce the audience, through song, to the film they’re about to watch. What they offer is no mere overture but an active deconstruction of the film they’ve made, with the Maels (joined later by stars Adam Driver, Marion Cotillard, and Simon Helberg, as well as a chorus) playfully singing about everything from their vanity and the theatrical experience to explaining their performers will “sing and die for you, yes in minor key.”

Many recent musicals (In the Heights, Rocketman, The Prom) have tried to ground themselves in realism or history itself, rarely breaking away to indulge in spectacle and never commenting on their approach to storytelling. Carax and Sparks, by contrast, aim to expose the artifice inherent in their production. The stripped-down vocalization and staging of Kylie Minogue’s song in Holy Motors is no more, with the maximalist moods and minimalist lyrics of the Maels creating something deliciously heightened. Everything in their film is designed to remind the audience that their characters exist within a production; the stage is the world itself (or vice-versa, its lyrics challenge), and every act is shot through with a certain theatricality that transforms that realism into something impressionistic. That sensibility is built into the very nature of the film’s premise: a glimpse into the lives of Henry, a provocative comedian, and Ann, the world-class soprano he loves, before and after the birth of their daughter Annette. Henry and Ann’s performances are attuned to a certain level of vice and virtue, the characters less fully fleshed-out human beings than archetypes in service of emotional storytelling.

Both Carax and the Maels’ willingness to engage with the history of not only their own work but traditions of screen and stage alike is what most defines Annette. As he’s done since the start of his career, Carax wisely uses cinematic references as emotional triggers rather than for Easter egg hunts. His films are atmospheric rather than heavily plotted, and there is a musicality to the way he directs that makes him an ideal fit for a musical. We’ve seen this in how he toyed with the aesthetics of silent film in Boy Meets Girl or French New Wave cinema for Mauvais sang, and Annette is no different. That the film has prompted cinematic comparison points to everything from A Star Is Born (in its characters’ rise and fall) to The Umbrellas of Cherbourg (due to its primarily sung-through form) is not surprising. That it has inspired frustration from critics for its willingness to alienate them both aesthetically and musically even less so.

But what is one to expect from a Brechtian vision such as Annette? It’s a film that exists somewhere smack between the baroque sets of Peter Greenaway’s films and the bare stages of Dogville. Whether it’s in the streets of Los Angeles, with our actors donning costumes to perform, or against a savage, rear-projection sea storm for Ann and Henry to both waltz and argue in, Caroline Champetier’s photography exists to blend the natural with the unnatural. It leans into fantasy while acknowledging that such fantasy can convey deeply human stories without sacrificing artificiality. One of the instances in which it is most clearly a descendent of Brecht’s experiments on alienation is the use of a puppet for Annette rather than a living actress. The craft that goes into designing and moving Annette’s marionette, allowing her to feel more like a human being than anyone else in the film, doesn’t take away from the queerness that comes with watching Cotillard and Driver embrace a puppet instead of a child.

The film’s music has already proven to be one of its most divisive features, with The Hollywood Reporter’s David Rooney noting that it’s “more often talky than melodic, with obsessively repetitive lyrics.” But to dismiss Sparks’s work here as simply “droning [...] aural indulgence,” per Richard Lawson in Vanity Fair, feels out of touch not only with the film but also with both Sparks’s musical career and the history of musical theater. Take Stephen Sondheim—the legendary musical theater composer and lyricist thanked by Carax in the film’s credits—whose work has been similarly accused of inaccessibility, most notably the complaint of a lack of hummable show tunes. Here’s the New York Times review of the cast recording for Sondheim’s Passion: “The music continually circles back on itself as if trying to redefine the terms of an argument that has no resolution.”

In some ways, that musical and this film are similar beasts. The Maels and Sondheim both have a flair for melodrama, and the songs in Annette are reminiscent of how Sondheim’s described his approach to the score for Passion, which “lie somewhere between aria and recitative, with an occasional recognizable song form thrown in” (from his book Look, I Made a Hat). They navigate the space between the austerity of musical theater and the flamboyance of opera rather than leaning into one or the other. Much like Passion’s manipulative protagonist, Fosca, whose behavior and volatility were a source of laughter and outrage for some audiences, Adam Driver’s Henry will likely elicit groans of disapproval. As other characters make their way into the spotlight, it’s Henry who has the core narrative and emotional arc of Annette. Driver leans into the tragedy of the character beautifully, allowing a reprehensible figure to be worthy of compassion by the time the credits roll.

With Sondheim, lyrical repetition is all about emphasizing character and mood; take Company, and its recurring use of Bobby, the protagonist’s name, as a choral refrain. At the start, it’s a playful and charming celebration, but by the end, it’s a suffocating tone. Or look at the tragedy of “I’m Still Here” from Follies, with each subsequent repetition of the titular phrase weighing its singer down and punctuating the extensive history that the character sings about. It’s especially prevalent in the way Sondheim plays with repetition in his score in Sunday in the Park with George, noticeably using the same motifs with minor changes to emphasize similarities between two different men navigating the same frustrations in different eras (“We Do Not Belong Together” and “Move On” constituting one such example within the text).

The lyrical complexity and rhythmic playfulness of the Maels’ work is in tune with Sondheim, not simply in Annette, but their entire musical career. The conceptual absurdity of their radio play The Seduction of Ingmar Bergman—of taking someone like Bergman and creating a Kafkaesque nightmare around which the filmmaker ends up in Hollywood stalked by executives who want him to make movies for them—isn’t far removed from Annette. The dry humor and musical repetition feel of a pair (Bergman’s confused and conflicted musings traded in for Henry’s frustrated grandiose proclamations), and the Maels use both to navigate the corruption of fame.

When discussing Sparks’s album Lil’ Beethoven, Pitchfork noted, “They abandoned rock convention yet again, offsetting elaborate, classical-inspired arrangements with brutally minimalist lyricism (which often just amounted to the song title repeated to hypnotic and hysterical extremes). The aesthetic overhaul proved especially complementary to Sparks’s long-time penchant for blowing up mundane minutiae into over-the-top melodrama.” Annette brilliantly follows suit, with Carax intentionally pairing the idiosyncratic with the banal: a stand-up act becomes a musical call and response between audience and comedian; a profession of undying adoration comes from a man calmly sliding his face between a woman’s legs; and a wistful reflection on one’s life happens while sitting on a toilet.

The conversational aspect of some songs is traded in for a sort of camp repetition of dialogue. As Tammy Glover, Sparks’s drummer on Lil’ Beethoven, said in Edgar Wright’s documentary The Sparks Brothers, “It was amazing to me that you could repeat a lyric and have it mean something different as the narrator starts saying it over and over and over again. It was almost like an acting technique.” It’s the kind of performance technique that works well when using performers with limited vocal ranges like Driver and Cotillard (the latter had some aid from soprano Catherine Trottman). This is especially notable in Annette, where a song can be almost entirely composed of two characters repeating the phrase, “We love each other so much,” but each time offering a unique delivery to a uniform statement. It’s why “Six Women Have Come Forward,” a nightmare song in which Ann imagines her husband being exposed as an abuser, feels so urgent. Its repetition of accusations (“each with a similar story, subjected to Henry McHenry’s abuses, witnesses to his violence”) instills the same dread as a premonition in a Shakespearean tragedy.

Then again, this is a film whose opening number is basically a joke about how similar “May we?” and “Mais oui” (translated to “of course”) sound. The command that Ron and Russell Mael have in their music over tone and narrative is compelling, and their lyrical expertise allows the viewer to be pulled back-and-forth between tears and laughter. Though past cinematic collaborations have had mixed results—from the failure of projects with both Tim Burton and Jacques Tati to the delightful tune written for Guy Maddin and Evan Johnson’s The Forbidden Room or their music for Tsui Hark’s Knock Off—this latest partnership may be their most fruitful. Paired with Carax, a filmmaker who knows how to engage with both artifice and sincerity at once, Sparks has given birth to something truly marvelous.