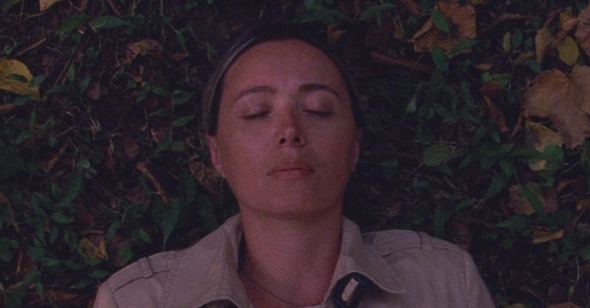 In the only widely circulated publicity still from Beginning, a woman lies on a bed of leaves with her eyes closed, her face partially shrouded in shadow. The photo, drawn from one of the many long static shots from the feature debut from Georgian director Dea Kulumbegashvili, reveals very little about the film. A work of pristine beauty and devastating violence, Beginning follows Yana (Ia Sukhitashvili), a woman married to the leader of a small congregation of Jehovah’s Witnesses in the Georgian town of Lagodekhi at the foot of the Caucuses bordering on Azerbaijan.

A religious minority in Georgia, the group is subject to attacks on both a collective and individual level, ranging from extremist terrorism to abuse from local law enforcement. Beginning zeroes in on Yana’s specific battle—while she’s bombarded both physically and psychically by various authority figures, including her husband and the police, her most volatile fight seems to occur on an interior level. The moment captured in the still image finds Yana ostensibly at peace, but the duration of the shot, as with most of the shots Kulumbegashvili puts forth, leaves ample room to question whether what we’re seeing is as simple as it seems.

From the first shot, Kulumbegashvili’s long takes exude a sense of foreboding. What appears to be the calm entry of parishioners into their place of worship is interrupted by a sudden and horrific burst of violence, and from this point on, we wonder what may break the silence of each seemingly tranquil moment. Yana is the focus of nearly all these frames, becoming the potential target of any future brutality. Kulumbegashvili has a way of dwarfing Yana amidst her surroundings—whether she’s blending into the background as she climbs along a rocky stream or being made to feel small by her husband. We’re only briefly and superficially let into Yana’s interior world, as she opens up to her husband, David (Rati Oneli, also a co-writer and producer), following the attack in the first scene that leaves her feeling unmoored and unstable. When she tries to reason with David to leave the village with their son Giorgi, he refuses, telling her she was aware of his ambitions and the risks associated with them. She says she feels disassociated from herself, that she’s unsure whether something is about to begin or about to end, and he briskly rebuffs her attempt at honesty: “It’s a perfect time for your little show,” he says. “Please don’t start this.” From this point on, we’re cut off from Yana’s consciousness as she wanders across her village’s stunning natural landscape, through its woods and flowery river banks, as the quietly majestic blue mountains overlook the scenery down below. While Yana’s emotional world remains hidden to us, we nonetheless feel an intimacy as she nestles herself into the vastness of her environment.

We later learn that Yana has been communing with nature since she was a small child—a visit to her mother reveals that she would confuse day and night, and her father kicked them both out in the cold when she wouldn’t stop crying as a baby. The two found shelter from the snow under a tree, and within five minutes she was calm, catching snowflakes in her mouth. The contrast between the violent power of men and the soothing force of nature echoes throughout Yana’s life. The former is best illustrated one evening when Yana is home alone—her husband has gone to consult with the church elders. As she sits in profile at a table in a darkened room, a small lamp illuminates a sliver of the chiaroscuro frame, while a green, almost divine-looking light seeps in softly from the window to highlight her body as she relaxes and tilts back. The doorbell interrupts this moment of strange grace, leading to a disturbing encounter with a man who claims to be a detective from Tbilisi (Kakha Kintsurashvili) investigating the violence against her congregation. The scene, which quickly escalates into a round of sexually coercive questioning from the largely off-screen detective, sees Yana submit to him out of fear and intimidation. It’s an extremely long and difficult interaction to watch, and sets the scene for Yana’s continued dissociation.

Yana’s struggle picks up on some of the threads of Kulumbegashvili’s previous short films, in which she examines life for women in Georgia, specifically the ways that powers of religion and patriarchy work together to stunt their autonomy. In Invisible Spaces (2014), a young housewife is married to a priest who refuses to let her pursue her own interests and pressures her into sexual acts. Léthé (2016) displays the primitive and ritualistic ways that boys exert sexual power over girls from a young age. Beginning focuses on religious indoctrination in young children, as Yana teaches students the meaning of heaven and hell in Bible study. She doesn’t understand why they’re giggling during class—religion is something she takes seriously, whether out of faith or out of fear.

Beginning, like its indeterminate title, doesn’t give audiences any easy answers or exit routes—while watching one long scene after another, one’s attention may wander. As I discovered after repeat viewings, this would be a mistake—the durational sequences will often hide a small detail that changes one’s outlook on the film. During the extended take where Yana is lying in the leaves, perhaps asleep, you might watch the light move across her body—that’s all there is to watch. Maybe she’ll look comfortable to you, or maybe a slight strain in her expression will start to appear. At one point, she may even appear to levitate, and a quick cut to her son watching her in the distance will lead you to question exactly who is lying down next to her.

However, just as Kulumbegashvili leaves many details up for interpretation, sometimes she has a tendency to starkly spell out the meaning behind a character’s vague actions. This happens most overtly toward the end of the film, when Yana starts to engage in increasingly erratic and dangerous behavior. In a scene with the atmospheric feel of a horror film, Yana leaves her house in the middle of the night, walking directly to camera and out of the reach of the streetlights. She wanders to a stream lined with purple flowers, the camera keeping its distance with a wide, static shot. (Arseni Khachaturan, filming in 35mm, captures the surface of each rock with as much attention as she does Yana herself.) As the violence of the ensuing events unfold, we wonder if it was Yana’s plan all along to intentionally put herself in danger. This is further hinted at when her husband finds a recording of her interaction with the detective—her response is to ask him to punish her.

The disconcerting images and plot points at the film’s end somehow manage to maintain their obscurity, even while being overly articulated. Two acts of violence are committed against men—Yana takes responsibility for one of them, while another is presented to us without explanation. The decision to leave Yana’s motivations ambiguous lends her a mysterious power, and works to undo some of her profound vulnerability throughout the film. With Beginning, Kulumbegashvili makes the bold choice to land on solid ground, and then let it disintegrate around her.