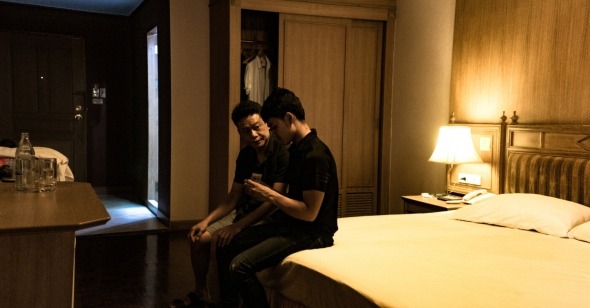 Touch and Go
By Michael Koresky

The glass of water perches, full and evidently untouched, on the corner of a table that pokes into the left side of the frame. Lee Kang-sheng reclines in a chair beside it, but never reaches for it, as he stares through a window, past the camera, past us, at a gray outdoors that we can only ascertain through the bisected reflection of wind-blown trees and the sound of pattering rain. The image, shot from the other side of the glass, is at once inside and out—he’s indoors but he doesn’t appear to be entirely insulated from the elements. Tsai has spent decades directing our gazes at Lee Kang-sheng, at his vulnerability, his resilience, his beauty, his sadness, and in this first, five-minute shot of his new film, Days, he reminds us again of why this once youthful but eternally sorrowful man, now in his early fifties, is among the great muses of what we once called cinema. He reflects the world for us—a mirror, a window, a glass of water unable to quench an unspoken thirst, a promise of release that may always remain out of reach.

With its prosaic title and a narrative framework simple to the point of abstraction, Days would seem to promise little more than a distillation of the Taiwanese filmmaker’s increasingly minimalist approach, the shot duration of which has been significantly extended in recent years by his shift to digital shooting. Yet unlike recent experiments such as his “Walker” installations, in which Lee Kang-sheng appears in monk’s robes moving very slowly across modern landscapes, or Your Face, his Warholian feature-length foray made up of thirteen unbroken close-ups of various human camera subjects, Days engages with the viewer on an almost cause-and-effect level. At the same time, Days’ relationship to storytelling is elusive, even in conception: Tsai made the film using a new method for him, shooting footage of Lee over a number of years with no story or roadmap (“I was simply doing something like a documentary, just recording what was happening to him,” Tsai said in an interview with Cinema Scope). Later, he constructed the material into a narrative, or at least something that resembles one enough to invite a more traditional mode of viewer sympathy, incorporating his captured footage into an emotionally expansive portrait of alienation that echoes much of Tsai’s best work while also functioning fully within Tsai’s newer aesthetic of extreme spareness.

In its final construction, Days takes the form of a two-hander, following the daily perambulations of a pair of isolated men who briefly, unexpectedly connect before going back to their separate lives. It’s as simple as that, as profound as that; there’s neither space nor need for motivation or backstory. Reflecting its method of filming, Days exists only in the moment—what’s important is happening right in front of the camera, not what may have been or what might be. Lee’s wanderer is paired with Anong Houngheuangsy, a Laotian immigrant Tsai had met in Bangkok. In a series of long takes, Anong prepares fish, rice, and vegetables anticipating an elaborate meal-for-one in his concrete, garage-like apartment; in another shot we see him working at an outdoor bazaar that sells clothes to tourists and passersby. We know little about him, other than that he is a solitary figure, and, like the young Lee from Tsai’s early films, he makes for a splendid camera subject.

Lee’s journey is not quite as mundane as Anong’s, less set to an apparent daily routine; rather, he is out of his element, seeking acupuncture treatment abroad for a mysterious illness. Lee has been suffering from a chronic sickness for many years, so one can imagine that a painful-looking procedure on the actor’s bare back, his face buried in a massage chair, is one of many kinds of experiments he has endured. Tsai’s camera unflinchingly watches as burning needles twitch and smoke in Lee’s skin, clearly becoming increasingly painful—it’s a powerful, uncomfortable reminder that what we’re watching here is not a performance as much as a recorded physical response. Once this lengthy scene mercifully ends, Lee wanders through bustling city streets, his neck in a brace, filmed in vertiginous, surreptitiously achieved handheld shots—a rare decision for Tsai, renowned for his scrupulously composed static frames.

Both men are always alone, isolated even when surrounded by others, bruised and battered by the indifference of urban living. Along with Lee, the film journeys from Taipei to Hong Kong to Bangkok, and eventually his path converges with Anong’s. Before this, at the film’s midpoint, there’s a two-minute shot taking in the sun reflecting off the shattered glass windows of a derelict building. The image is remarkably beautiful in its brokenness, a rare moment of transcendent nature shining through, communicating the essential loveliness of fragile, ragged lives. Placed in the film where it is, the warm gleam of sunshine functions as a kind of curtain-raiser for Days’ centerpiece, a thirty-five-minute sequence in which Lee, still recuperating from his harrowing back procedure, undergoes a far tenderer treatment. Lee, now in a hotel room, prepares his bed with towels; Tsai cuts to a shot of Lee naked and face down, with somber, soft light through the room’s red curtains. Gradually, a figure makes his presence known in the right side of the frame, by Lee’s feet: an underwear-clad Anong, who proceeds to give Lee a full body massage that ever so slightly transitions into a sexual encounter before reaching erotic climax.

Tsai has before built his films to a moment of sexual release, but usually such moments are tinged with transgressive perversity (The River) or violence (The Wayward Cloud). Here, Lee and Anong’s physical consummation, while complicated by its transactional nature—Anong, after all, is a hired worker, paid for by Lee with a wad of cash—has a purely therapeutic quality. The two men share a more spiritual moment of commune after the massage: Lee gifts the younger man a music box that plays the theme from Charlie Chaplin’s Limelight—another impossible, May-December not-quite love story. The remainder of the film follows the men as they return to their lives of solitude; we can assume that, as characters, these two may never see each other again, even if Lee and Anong very likely will remain acquainted—the film's clearest division between fiction and reality.

Days is an act of love, an expression of commitment—to a man, to an image, and to the cinematic medium as a means of expressing that love and commitment. In outline it perhaps most acutely resembles Tsai’s wordless short No No Sleep. In it, Lee appeared as his “Walker” monk character, barely crossing paths with a handsome stranger in a bathhouse. In that film, which teases out the queer desire of its viewers, we don’t even know whether the two men notice each other, let alone if there’s any mutual attraction: the yearning for erotic catharsis that seems to radiate off the screen might ultimately be our projection, only what we want. Days offers the consummation that No No Sleep denied, while also giving Lee the physical adoration, however fleeting, his characters are so often denied. What Tsai Ming-liang has done for a generation of movie-watchers is incalculable; his films have been nothing less than a reconstitution of how, where, and why we look. In Days he rewards our gaze, bestowing pleasure on the man he’s allowed us to love right along with him.