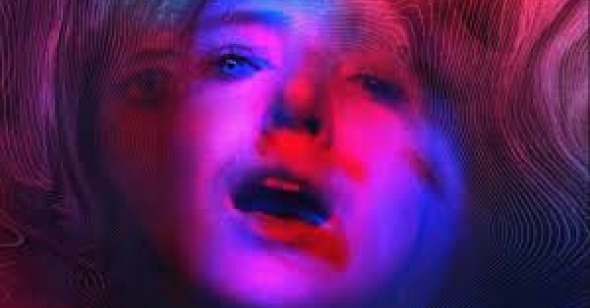 “I simply wanted to take my mind off of the fear,” Margit Cartensen’s Margot states towards the end of Rainer Werner Fassbinder’s 1975 Fear of Fear, refuting a doctor’s notion that she wished to kill herself. Margot has been plagued by fear from the film’s start, and this paralyzing yet undiagnosable affliction has rendered her inert despite the supposed comforts of her middle-class apartment. It can be alleviated, but only briefly, with large amounts of alcohol and repeated listens to Leonard Cohen’s “Lover Lover Lover.” Amy Seimetz’s She Dies Tomorrow often recalls Fassbinder’s film, swapping one of Fassbinder’s muses for Seimetz’s own, Kate Lyn Sheil (whose quivering deadpan recalls Irm Hermann more than Carstensen). The 45 years between the two films is also a persuasive argument against the easy labeling of She Dies Tomorrow’s mordant concerns as “timely” in the age of the COVID-19 crisis.

As She Dies Tomorrow opens, Amy (Sheil) shuffles back home from a cabin in the desert in a fugue state, imbued with the unshakable idea that she is on the eve of her death. She rubs herself against her freshly bought house’s bare walls and hardwood floors like a cat in heat. Amy, a sober alcoholic, then breaks open the liquor cabinet and turns on the record player. Her drug of choice is not “Lover Lover Lover'” but the Lacrymosa movement of Mozart’s Requiem in D minor. It’s a fitting selection—after Mozart’s death, his widow, Costanze, is believed to have spread the apocrypha that Mozart was consciously writing the music for his own funeral. Amy is disconcertingly drunk and has Lacrymosa on repeat when her friend Jane (Jane Adams) arrives in distress, assuming herself to be interrupting a “simple” relapse.

Unlike in Fear of Fear, Amy’s premonition of doom in She Dies Tomorrow is a contagion, hungrily contaminating her clueless, birthday-obsessed Los Angeles friends and neighbors, beginning with Jane. But this plague is in no way biological or scientific; it is profoundly subjective and insurmountable. Seimetz stresses the inexplicable nature of the belief by depicting it as a sort of neon Protestant visitation that appears to each successive victim, rendered by cinematographer Jay Keitel as a hypnotic light show. Primary colors flicker and overlap, enveloping each character as if they were trapped in an aquarium. The patient, trance-inducing shots are accompanied on the soundtrack by crackling, overmodulated, and barely audible dialogue. The score, credited to Mondo Boys, purrs and hums in the lower register before occasionally, dynamically leaping in volume with the speed of a jump cut. She Dies Tomorrow, perhaps tragically in this moment of theatrical moratorium, is best seen large and heard loud, and its distributor, Neon, has done well in releasing it exclusive to drive-in theaters before moving to home viewing.

The zealous certainty of their doom, despite a lack of evidence, seems to unnerve these pragmatic characters all the more. They find comfort in the natural world. Jane practices some sort of microbiology in the basement of her home, and rushes downstairs in desperate search of stasis. “Oh, hi!” Jane coos, staring through her microscope at her mysterious organisms under glass. “I’ve missed you. I think about you all the time.” Meanwhile Amy’s first impulse is to run her hands through the foliage outside of her home, grasping fistfuls of leaves and grass, and finds solace in the idea that perhaps her own freshly dead skin can be boiled down and repurposed as a leather jacket. The scene in which she insists to Jane that this transformationis her dying wish pits Adams and Sheil’s considerable deadpan talents against each other to inspired results; there are few contemporary actors better suited for patiently intoning “nobody is going to turn you into a leather jacket” than Jane Adams.

Jane searches for comfort at the home of her brother (Chris Messina), crashing her sister-in-law’s (Katie Aselton) birthday party in her pajamas in a pressure-cooker of a scene that beautifully demonstrates Seimetz’s talent for economical, surreal punchlines. The fear is spread to the party’s guests (Jennifer Kim and Tunde Adebimpe), and from there emanates across Greater Los Angeles throughout the night.

Both this and Seimetz’s 2012’s Florida-heat-baked psychotronic road movie Sun Don’t Shine are based upon the filmmaker’s own nightmares, an inclination that makes sense given her demonstrable loathing of exposition. She Dies Tomorrow’s narrative is abstracted, chopped and screwed, and interspersed with memories of Amy’s desert vacation fling with a man (Kentucker Audley) that insinuates that Amy may not have been the pandemic’s patient zero. In all her work, Seimetz’s characters think often and rarely belay their feelings or intentions. In the first season of the series The Girlfriend Experience, which Seimetz and Lodge Kerrigan adapted from Steven Soderbergh’s 2009 film of the same name, Riley Keough’s Christine presents an obstinate front, not offering the audience a single clue as to whether she is hapless victim to the current of the corporate legal drama swirling around her, or a devious master manipulator. Christine only lets her guard down once, late in the series, when she asks her sister (played by Seimetz) if it’s possible that she might be a psychopath.

In Sun Don’t Shine, Sheil and Audley play hapless, dysfunctional lovers making their way across the Florida swamps with a body in the trunk of their car. Sheil appears similarly dissociated in that film, speaking mostly in infantile pleas and shuffling like a loyal dog after her hot-headed lover, but Seimetz and Sheil never tip their hand to just how much of this is an act; a front masking a constantly whirring and calculating mind. Sheil is well-practiced at portraying this type of character—she can project a catatonic aurawhile suggesting that, behind glassy eyes, her character may be the smartest person in the room, as proven in Robert Greene’s performance-documentary Kate Plays Christine (2016), where she is seen quietly usurping authorial control from the director. Adams, who lately has proven memorable in brief appearances in Twin Peaks, the television series Atlanta, and the recent films of Joe Swanberg, is a welcome addition to Seimetz’s cohort. Like Sheil, Adams’s saucer-eyes can portray damage, thoughtfulness, and mania all at once while simply staring in silence.

At under 90 minutes, She Dies Tomorrow doesn’t allow the viewer to spend that much time with each of these individuals; it takes place over little more than a day, not counting Amy’s flashbacks to her desert sojourn. But the amount it manages to intimate about these characters’ inner lives—their traumas, pasts, and anxieties—is remarkable. There are no clear resolutions or explanations, and certainly no goals are achieved. Seimetz is content to watch her vulnerable characters wriggle blindly, like organisms trapped under a microscope.