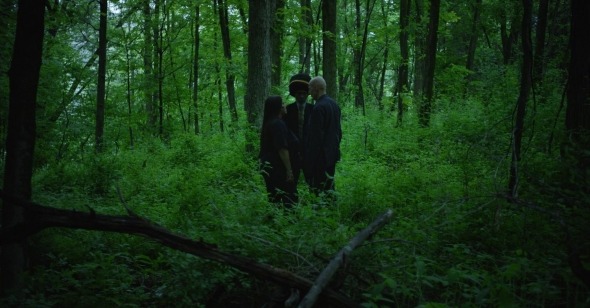 I think about the end of the world a lot, and I see clues indicating its approach in more places than I'd like to admit. It’s there in news of the melting ice caps, shrinking shorelines, and burning hills, of course; but also in abandoned strip malls, clearance sale aisles at big box stores, or whenever I think about romaine lettuce, which seems to get paler and scrawnier with every passing year.

The end of the world is everywhere when you attune yourself to the signs of it, especially on screen. The Wikipedia page for “List of apocalyptic films” organizes titles by decade. Hairs could be split over what classifies or what's missing from these lists, but simply as a visual reference the page tells a clear story: our collective subconscious is growing increasingly anxious about the end of the world. Only four films before 1950 are listed; between 1950 and 1959 there are 12; between 1960 and 1969 it jumps to 24. The numbers continue steadily increasing (with the exception of a noticeable dip between 1990 and 1999 that is likely due more to a lack of user input than actual decline) until finally crescendoing in the most recent decade with 96 apocalyptic films produced between 2010 and 2019. Now there are 97, because I just added Empty Metal, the first narrative feature by Adam Khalil and Bayley Sweitzer. Seldom, if ever, has the low simmer of abstract unease I feel on a daily basis been so precisely articulated onscreen.

The film opens with a pot of soup being heated over a campfire. The three main characters—Rose, Pam, and Devon, members of a noise band called Alien—sit around the fire hungrily eating from cans of beans with plastic spoons. Rose narrates:

I was living out my greatest fear.
I used to look forward to a complete societal collapse.
I felt ready for it.
I used to think that the end of the world and the apocalypse were the same thing.
Now I know the difference.
I have come to realize that the inevitable destruction of the status quo will be more of a confused, anticlimactic rot, and will take place 10 to 15 years after my death.
I have come to realize that I am living out my greatest fear.
That I will die before the end of the world.

Cut to camcorder footage of Queen Omega, a vlogger, knocking on their door for an interview. The interview itself is one of the most uncomfortable moments in the film. It starts out in typical fashion; they introduce themselves and talk about their music, and when Pam mentions the responsibility that comes with being an artist, Queen Omega jumps in and asks, “Why don't you guys actually do something?” The camcorder pans across the band members’ faces as they erupt in an awkward chorus of “like what?” The ensuing exchange, in which the band half-heartedly argues that making music is doing something and Queen Omega pushes to find out exactly what that means, hangs heavy in the air and fuels the rest of the film. The moment adeptly captures the disparity between the enormity of what needs to be done and the unyielding inertia of modern existence; it's enough to form a knot in your gut that lingers for the duration of the film.

We quickly learn that Queen Omega is part of a secret alliance of telepathic Native, Buddhist, and Rastafarian insurgents who are working to upend the status quo. They are recruiting the band members to assassinate police officers who were acquitted for brutal killings conducted while on duty. The storyline weaves between the band members, the insurgent leaders, a right-wing militia group, and a surveillance drone tracking them all. The scenes in Empty Metal are at times clearly scripted with a slightly more formal camera, while other moments unfold in a less focused vérité documentary style, revealing their purpose as they go along. YouTube videos of interviews with the police officers talking about their crimes, and computer animated reenactments of the killings, are intercut at various points, grounding the more fantastical elements of the storytelling firmly in our contemporary reality. Handheld camera and jump cuts in the editing further add an intimacy and immediacy.

Shot over three years with a cast and crew of friends and peers, Empty Metal is clearly a film that evolved in the process of production rather than one that was conventionally conceived and executed. Frustrated with how the tire fire of contemporary American politics is portrayed on film, Khalil and Sweitzer take a risk by shifting perspective to varying extremist factions. There are references indicating that the insurgent group was responsible for recruiting Timothy McVeigh. When the daughter of the Native insurgent leader explains that, for them, the end of the world happened a long time ago and cuts to a real video of peaceful Native protestors in a standoff with armed authorities, it is clear that the lines and designations separating right from wrong, even in terms of domestic terrorism, are not as stable as they seem. This approach is unsettling and effective as it offers no universal truths to fall back on.

Films about the apocalypse are typically full of enough special effects and larger-than-life heroes ready to save us from ourselves that we are never forced to sit with the discomfort of contemplating the actual end. Empty Metal offers no buffer zone of explosions, adrenaline, or quippy one-liners; the characters exist in our world. If we don't know them, we've seen them. Everything feels familiar. It is the antithesis of Avengers: Endgame, and it is relatable on a viscerally uncomfortable level. It could not exist as a big-budget Hollywood film. The lines are too blurry. Rose, Pam and Devon are on a grim mission, yet they are the heroes of the film. Does that make us complicit? Of course it does: we are all responsible for everything we do and everything we don't do.