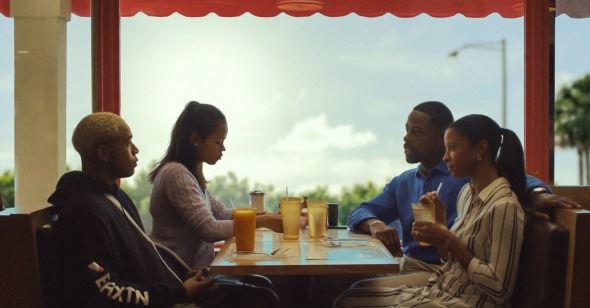 Be Above It
By Vikram Murthi

Waves, the third feature by Trey Edward Shults, focuses on the destabilization of a black suburban family living in South Florida to ostensibly explore themes of grief and forgiveness. But more accurately, Shults probes at reductive conceptions of grief and forgiveness, the type that arise from a horrific event, which forces families to stop being polite and start getting real until everyone gets enough out of their system for there to be ‚Äúclosure.‚Äù The goal doesn‚Äôt seem to be to sincerely interrogate the ways people move through the world following a devastating loss, let alone maintain baseline fidelity to the actual contours of human emotion, but rather to poke at an audience in just the right places so they can experience catharsis via fictional suffering. Some might call this melodrama, but, if so, it‚Äôs melodrama of the most specious, dishonest sort.

The family-shattering incident occurs halfway through Waves. Tyler Williams (Kelvin Harrison Jr.), a high-school wrestling prospect, has experienced a SLAP tear in his shoulder that ends his burgeoning athletic career, and at the same time his girlfriend Alexis (Alexa Demie) decides not to terminate her pregnancy. These two events send him on a downward spiral characterized by escalating opiate abuse and rage outbursts soundtracked to Tyler the Creator growl-screaming, ‚ÄúI fucking hate you‚Äù from the song of the (abbreviated) same name. When he crashes a party to confront Alexis, their fight ends with him striking her so hard that she hits her head and dies. Waves then shifts perspectives to Tyler‚Äôs younger, more reserved sister, Emily (Taylor Russell), who deals with her brother‚Äôs federal life sentence by falling for Luke (Lucas Hedges), a former teammate of Tyler‚Äôs whose sensitivity and innocence are typified by high-octane awkwardness.

Shults transparently attempts to mask this type of unimaginatively soapy material with empty formal flourishes. The teens‚Äô driving scenes are filmed with 360¬∞ rotating cameras to artificially amplify the tension, creating the impression that something could go wrong at any moment. A constantly panning camera theoretically captures the go-go nature of a busy high school life, but it also implies that, like a shark, the film might die if the camera stops moving. There are alternatively tranquil or plaintive scenes set in water whose set-ups are either swiped from Moonlight or broadly recall the work of Terrence Malick, for whom Shults briefly worked. Waves is also the kind of film that employs an ever-narrowing aspect ratio, in this case to convey Tyler‚Äôs claustrophobic subjectivity, only to slowly widen it to convey Emily‚Äôs reintroduction to the world. This subtext-be-damned approach infects every aspect, from the dialogue (‚ÄúWe need love to bring us back,‚Äù a preacher intones during Sunday service, a sentiment more or less parroted again in the film‚Äôs back half), to the color scheme (Shults bathes Alexis in red during the moments before her gruesome death), to the unsubtle, baffling soundtrack that asks the question, ‚ÄúWhat if Generation Z exclusively listened to Pitchfork‚Äôs 2012-2013 picks?‚Äù Along with Jonah Hill‚Äôs Mid90s, Waves suggests that an urgent threat facing American cinema is an early-to-mid-thirties white director with access to an expensive music budget.

To employ a maximalist style is neither novel nor disqualifying, but it chafes when the work feels so conceptually secondhand. Shults mainly coasts on his film‚Äôs contemporary setting to obscure his derivative ‚Äúthe kids are not alright‚Äù thematics. Yet, Waves‚Äô ideas, such as they are, about how fathers push their sons to be high achievers out of misplaced responsibility, or how teenagers live secret, self-destructive lives beyond the purview of their parents, or even social media‚Äôs obliteration of private space in favor of permanent public performance, are neither specific nor developed enough to gain purchase. Even more frustratingly, Waves doesn‚Äôt work as an ensemble portrait. Shults never offers an avenue into the Williams family beyond their direct suffering or their adjacent relationship to suffering. Bleak tragedy without sufficient grounding in legible characterization renders pain incommunicable and incoherent.

Even when Shults incorporates a potentially potent idea, he bungles the execution. In Waves‚Äô second half, Emily persuades Luke to visit his estranged, cancer-stricken father in hospice. He revealed earlier that his father had been an abusive drug addict from whom he and his mother fled, and that he‚Äôs a ‚Äúfucking asshole‚Äù who deserves what‚Äôs coming to him, but nevertheless, Emily insists that they both drive from Florida to Missouri to see him before he shuffles off this mortal coil. There‚Äôs a delightful perversity at play in this situation: a young girl, not knowing how to deal with the immense resentment and grief she feels towards her brother, unwittingly pressures her boyfriend to deal with his familial baggage he‚Äôs also not prepared to confront so that she can experience it secondhand. If the rest of the film tapped into even a tenth of the crude morality the premise holds, there might be rich territory to mine about the ways grief manipulates the subconscious and catches people in the crossfire.

Instead, Shults instead settles on the most sentimental direction for Waves. Luke must forgive his abusive father because it‚Äôs the right thing to do even if it doesn‚Äôt make emotional sense. Emily must forgive her criminal brother because holding onto hate only begets more hate. Emily and Tyler‚Äôs stepmother, Catherine (Ren√©e Elise Goldsberry), must forgive her husband Ronald (Sterling K. Brown) for putting so much pressure on his son. Once all the familial machinations and high-stakes drama are stripped away, what remains is, well, love, how it conquers all, how it‚Äôs stronger than hate, and how it will sustain us long after our grudges fade from memory. It‚Äôs retail therapy by way of half-memorized Bible verses and the blandest Beatles songs.

It‚Äôs also an astoundingly simplistic takeaway for a film that features an 18-year-old middle-class black kid who goes to prison for life after committing the accidental murder of his pregnant girlfriend. It speaks to Waves‚Äô gravest problem: the vagueness of the Williams‚Äô identity and how it informs their lives pre- and post-incident. Shults superficially addresses the family‚Äôs blackness a few times‚ÄîRonald lectures Tyler that ‚Äúthey are not afforded the luxury of being average‚Äù; he later tells Catherine that he pushed Tyler too hard because being ‚Äúa black boy‚Äù in this world is its own struggle; a pro-life protestor yells a racial slur at Tyler outside an abortion clinic‚Äîbut it‚Äôs otherwise treated so nonchalantly that it feels like a deliberate elision, an attempt to avoid any race conversations in favor of inoffensive universal maxims. It‚Äôs not problematic so much as it is lazy that white actors could play the Williams family and Waves would barely change an iota. Putting aside the debate over who gets to tell what stories, Shults‚Äôs failure of imagination seems to be the product of neglect rather than ignorance, as if he wasn‚Äôt willing to mold his film to fit the diversity of his cast, or, worse, didn‚Äôt have enough time to do sufficient research. As it stands, Waves might be the most ‚Äúpost-racial‚Äù film to arrive in years.

It‚Äôs tempting for many to characterize films like Waves as ‚Äúambitious,‚Äù which reframes failure as a noble effort. For Waves to be truly ambitious, however, it would necessarily exhibit lofty goals, formally or thematically, or just attempt to say something, anything rewarding, even if it‚Äôs covering well-worn emotional subject matter. It‚Äôs maddening that Waves actively courts importance it hasn‚Äôt remotely earned by relying upon grandiose theatrics meant to confer significance upon itself. Also, since it‚Äôs technically about young people living in America today, it‚Äôs easy for adults to project onto it whatever conceptions of masculinity or identity, or, if they‚Äôre so inclined, cautionary messages about drugs and promiscuous sex that they deem appropriate. When utter banality is conveyed with adolescent earnestness, it‚Äôs easy for people to mistake it for profundity. It‚Äôs why Shults relies on Thom Yorke‚Äôs most heartfelt ballad to perform the heavy lifting of ending his film: in this case, using other people‚Äôs poetry only lays bare the fraudulence of your own.