It Comes at Night 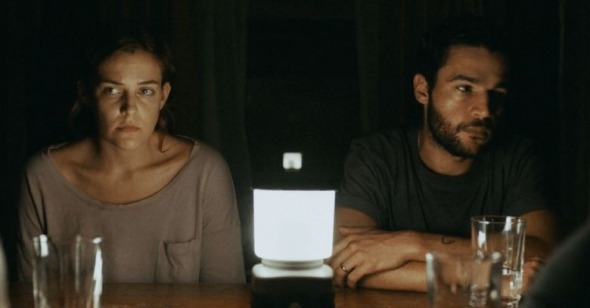 Beware of writer-directors bearing stripped-down parables about the end of the world, and if you must engage, proceed with caution. These days, there is no quicker shortcut for independent filmmakers to a certain pool of film-cultural relevancy (and the shiny distribution deals that go with it) than to craft a self-consciously artful genre movie, and credit is due to Trey Edwards Shults for recognizing and seizing on the moment with It Comes at Night. By swapping out the all-in-the-family psycho-dramatics of his shoestring debut Krisha for the more conventionally saleable dread of a survivalist thriller—one that’s already being hailed as a “jaw-dropping” “horror masterpiece” in breathless blurbage cultivated from every corner of the Internet—Shults is courting a wider audience. It’s the calculated industrial upward mobility that comes from following a cinematic Dear John letter to Mr. Cassavetes with one to Mr. Carpenter, and it’s enough to make some of us dubious from the get-go.

The opening sequence of It Comes at Night does its part to head off skepticism at the pass, summoning up the ferocious, in-your-face intensity of Krisha—a chamber drama frequently praised for appropriating the audiovisual tactics of horror movies—while reorienting it in a more generically sinister context. Speaking calmly and tenderly through tears (as well as a military-issue gas mask), Sarah (Carmen Ejogo) bids farewell to her terminally ill father, Bud (David Pendleton), whose deathbed is a makeshift litter; as soon as she’s said her piece, Bud is carried out to the woods by Sarah’s husband, Paul (Joel Edgerton), and their 17-year-old son, Travis (Kelvin Harrison), where he’s shot in the head, dumped in a ditch and incinerated. Here, the wholly relatable terror of seeing a loved one diminished by disease gets joined to postapocalyptic tropes, and Shults and his cinematographer Drew Daniels (who also shot Krisha) generate imagery that punches through both levels of familiarity: the flames from Bud’s body reflected in his grandson’s own gas mask, obscuring the boy’s reaction while alluding to the inferno of emotions steadily burning away beneath his visor.

The shot also alludes to the idea that the story is going to be told from Travis’s point of view, and the architecture of both Shults’s screenplay and editing scheme (the director shares credit with Matthew Hannam) has duly been jerry-rigged to these impressionistic specifications. The sensitive, physically fragile Travis occupies the middle position between his father’s tough-as-nails, fiercely protective pragmatism—which, it’s implied, has allowed his household to survive the recent population-decimating, grid-smashing viral outbreak far longer than any of their friends or neighbors—and the softer, more nurturing sensibility represented by Will (Christopher Abbott), the stranger who breaches their heavily fortified summer home during a desperate search for water and is eventually invited to bring his own family to live there under the aegis of strength-in-numbers. Wedged into the hidden attic crawlspace above the guest room, Travis thrills to the younger couple’s gentle, sensual rapport and later fantasizes about Will’s wife Kim (Riley Keough)—wet dreams that congeal into gooey sex-and-death hallucinations that stand-in for the rage and futility of coming of age at what might just be the end of history.

The juxtaposition of different kinds of interiority, of a living space and a headspace being simultaneously invaded, is sophisticated and clever. It’s also not quite enough to offset the accumulation of clichés that Shults uses to shape his story, which is little more than pretense for shows of stylistic force. As It Comes at Night creeps forward—patiently at first, and then with loping, staggered steps—it stakes a claim to the kind of showmanship that can be easily branded and admiringly connected to its forebears. I can’t claim for sure that there’s a deliberate act of homage in dubbing Bud’s beloved dog “Stanley,” an animal whose steadfast, affectionate manner is a constant, painful reminder of his owner’s absence. Nevertheless, the film’s repertoire of compulsively symmetrical compositions and implacable tracking shots, as well as its Bettelheim-ian fairy tale signifiers (haunted forests, forbidden doors), evoke you-know-who as surely as Robert Eggers’s Shining-biting set-pieces in The Witch or Alex Garland’s distaff-HAL shtick in Ex Machina.

The style is not ineffective, but it feels received. And, absent the sort of keenly specific, culturally and historically inflected storytelling at work in, say, The Witch—by some distance the best of the recent crop of tony art-horror films, and the one I’d bet on enduring beyond its first set of release windows—the film becomes packaging for generalities: that the instinct to take care of our own abuts on our sense of empathy and compassion; that cohabitation is the first step toward conflict; and that paranoia is incompatible with the better angels of our nature. Ideally, the shading would come courtesy of the actors, but Edgerton and Abbott are so locked into their diametrically opposed roles that they cancel each other out, while Ejogo and Keough only exist in mutual counterpoint (though Ejogo carries herself throughout with a believably soul-weary fatigue that goes further under the circumstances than any of her co-stars’ more voluble approaches). As for Harrison, he’s playing a conceit rather than a character—the passive accessory to tragedy, paralyzed by conflicting impulses—and his performance unfolds accordingly as a series of anguished reaction shots.

Its wispiness is at once the most intriguing and frustrating thing about It Comes at Night, which is sure to be praised in some corners for never erupting into an all-out horror-show, and also for embracing subtlety and abstraction in its final scenes (though said subtlety is relative considering that history-teacher-turned-mountain-man Paul has a framed reproduction of Bruegel’s The Triumph of Death hanging in his cottage’s living room). The film finally pivots on the question of which one of its characters is responsible for—willfully or accidentally—leaving a door unlocked, in the process exposing the group to all the dangers, ephemeral and otherwise, lurking in the woods outside. Ideally, this terrifying ambiguity would open the film up beyond its carefully worked-over symbolism and coyly withholding dramaturgy and connect it to some kind of larger and terrifying observation about the world, and yet all it really does is shrink things back down to the far less interesting question of whether the latest in a line of skillful, naggingly prefab American thrillers has any real there there. Even if it’s difficult to prove one way or another, there is a difference between productively undermining an audience’s expectations of closure and coherence and evading seriousness altogether (and if there’s one thing a movie as doggedly humorless as this one is chasing, it’s seriousness). If I’m not quite sure which of these is truer of It Comes at Night, that could be a sign that Shults has achieved his goal of a transcendent genre exercise. But I have my suspicions.