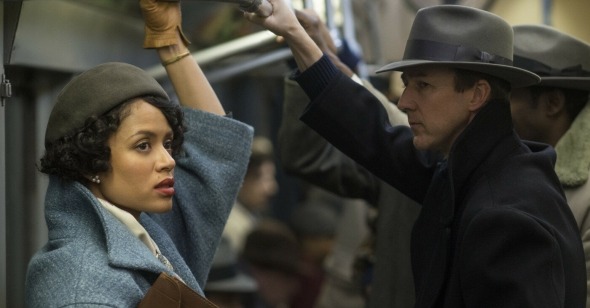 While the best views of Manhattan are visible from Brooklyn, to get a really good look at Brooklyn you need to do a little more legwork. Some say the borough is best seen from a moving train car above ground. Others believe you‚Äôll have better luck from the sloping hills of Greenwood Cemetery. Either way, it‚Äôs not a place that‚Äôs easy to pin down. The latest cinematic effort has come in the form of Edward Norton‚Äôs Motherless Brooklyn, an adaptation of Gowanus-born writer Jonathan Lethem‚Äôs 1999 detective story told from the perspective of a P.I. with Tourette syndrome as he navigates intricate layers of corruption between Carroll Gardens and the Upper East Side. In this adaptation, a passion project written, directed, produced by, and starring Norton, he‚Äôs stripped Lethem‚Äôs outer-borough opus for parts, literalizing the novel‚Äôs allusions to hardboiled noir storylines and devices by setting it in the 1950s. Not stopping there, he‚Äôs done away with Lethem‚Äôs more understated plot and villains and inserted the unwieldy history of city policies that sped up gentrification, complete with a caricatured Robert Moses stand-in played with SNL-levels of nuance by Alec Baldwin. In attempting to say something meaningful about race and politics in the city‚Äôs biggest borough, Norton‚Äôs fallen into the same pattern as some of Brooklyn‚Äôs real-life real-estate developers and city planners‚ÄĒgetting rid of what made the source material so compelling in the first place, and adding his own personally convenient plotlines in the process.

The idea to turn Motherless Brooklyn into a movie germinated twenty years ago. As the story goes, ever since someone Xeroxed the actor an advance copy of the book, Norton has been fixated on playing protagonist Lionel Essrog, who calls to mind other characters with mental or physical afflictions brought to life in celebrated performances like Tom Hanks in Forrest Gump, Dustin Hoffman in Rain Man, and Daniel Day-Lewis in My Left Foot. Norton cites these examples specifically even today, in a recent New York Times interview displaying a nostalgia for a time when people made movies like these‚ÄĒepic, award-winning ‚Äúunderdog stories,‚ÄĚ where you root for these heroes, ‚Äúnot in spite of their affliction but because of it.‚ÄĚ Around the time Norton got his hands on Lethem‚Äôs novel, he was embodying some of the most iconic and primal personifications of white male rage in powerful‚ÄĒand prophetic‚ÄĒshocks to the system like American History X (1998) and Fight Club (1999). At that moment in his career, Motherless Brooklyn would have been an about-face for Norton, an effort to recount the ‚Äúuntold‚ÄĚ stories of New York‚Äôs displaced people of color, along with their rich culture (complete with a sojourn to Harlem to hear a radical thing called ‚Äújazz‚ÄĚ). What he delivers is a film about a white man who attempts to expose the truth behind gentrification, with the help of a black woman who‚Äôs kind enough to teach him what it is and improbably fall in love with him in the process. Whether or not Norton is angling for Oscar gold, he‚Äôs certainly using a tried-and-true formula that appeals to the Academy‚Äôs liking for ‚Äúwhite savior‚ÄĚ narratives.

Lethem‚Äôs novel is written so cinematically that adapting it directly requires a filmmaker with a fully developed creative vision to interpret its anachronistic mix of present-day signifiers and classic noir‚ÄĒa Motherless Brooklyn from Christian Petzold could have perhaps yielded interesting results. Norton doesn‚Äôt investigate Lethem‚Äôs motives, saying that ‚Äúit could feel ironic if you had guys in our times talking like noir gumshoes.‚ÄĚ Likewise, on the page, Lionel‚Äôs Tourette-induced verbal gymnastics are impressive, at once composed and completely off-the-wall. Regardless of his intentions, Norton‚Äôs spasmodic interjections seem to play mostly for laughs instead of engendering sympathy on the audience‚Äôs part.

Meanwhile onscreen, Lionel‚Äôs physical and verbal tics are generally met with such placid understanding that it‚Äôs unclear what kind of hardships he‚Äôs faced that have made him such an underdog. Lionel spends minimal time detailing his backstory in voiceover‚ÄĒhow his mentor Frank Minna (Bruce Willis) plucked him and three friends from an orphanage and trained them to be ‚ÄúMinna Men,‚ÄĚ carrying out shady tasks under the guise of a car service agency. When Minna is murdered in the first scene, there‚Äôs little explanation as to why this is so devastating for Lionel, and how Minna had become the parental figure he was missing, a significant element of Lethem‚Äôs book. As Thom Yorke‚Äôs ‚ÄúDaily Battles‚ÄĚ plays on the soundtrack, Lionel drifts from the hospital where Minna died to his dimly lit apartment that overlooks the Brooklyn Bridge (a heavy-handed touch in an otherwise impressive production design by Beth Mickle). Later, musicians in a Harlem nightclub, including a Miles Davis-type (played by the excellent Michael Kenneth Williams, with trumpet solos recorded by Wynton Marsalis), riff on Yorke‚Äôs ballad again, spinning it into an intriguing blend of classic and contemporary jazz. These are stirring sequences, thanks in large part to Yorke‚Äôs otherworldly songwriting, and Norton would have perhaps done well to incorporate more modern-day touches in a film that‚Äôs otherwise firmly ground in the 1950s.

Working in genre can be an excuse to play into and explore clich√©s, but Norton‚Äôs limp tropes fail to contribute to a broader vision. It‚Äôs as if so much energy has been put into Norton‚Äôs depiction of an offbeat detective that every other character is a pastiche of overused traits and recycled lines. It‚Äôs a testament to Gugu Mbatha-Raw‚Äôs performance that she manages to supersede her flimsy arc as Laura Rose, Lionel‚Äôs guide through Harlem and potential link between Minna‚Äôs death and Moses Randolph‚Äôs policies of displacement, carried out by his shadowy ‚ÄúBorough Authority.‚ÄĚ Laura is written to be a strong, self-sufficient crusader in the fight for fair housing. But when Norton takes her home after her father is murdered by the same people who killed Minna, you can predict that she‚Äôll utter that line often heard from a seductive woman in mourning: ‚ÄúCan you stay with me for a while?‚ÄĚ Laura, unlike the complex and ever-evolving femme fatales of Lethem‚Äôs novel, is eternally sincere, so when she says these words their ensuing romance feels too easy. Similarly, Minna‚Äôs brash and lively wife, Julia (Leslie Mann), is robbed of her entire storyline, given only two short scenes, which barely make use of Mann‚Äôs considerable talents for playing volatile women, swinging from sober nonchalance in one exchange to unhinged distress in the next.

In an even greater missed opportunity, Norton oversimplifies the rich history of Robert Moses and the displacement of people of color that took place over his nearly 50-year career in New York City government. This is a story that begs to be told onscreen‚ÄĒbut not in the background of another. Clearly Norton has an appreciation for Robert A. Caro‚Äôs masterpiece The Power Broker‚ÄĒRandolph‚Äôs turbulent swearing-in ceremony and its aftermath are lifted directly from the book‚ÄĒwhich leads one to wonder why he didn‚Äôt throw his efforts behind a full-fledged biopic. Baldwin imbues Randolph with uncomfortable holdovers from his Trump persona, and his character is ultimately reduced to a predator along the lines of Chinatown‚Äôs Noah Cross.

Norton evidently would like Motherless Brooklyn to be for New York what Chinatown was for Los Angeles, and his effort to dramatize the inevitable cycles of urban corruption into a genre framework as Polanski did is an admirable one. Still, it was hard to ignore the irony that the film‚Äôs New York premiere took place at Lincoln Center, the Moses-backed project that displaced thousands of families, mostly Black and Hispanic, from the neighborhood that used to be Lincoln Square. Moses knew ours is a society that prizes convenience above all, and while we might abhor everything Robert Moses stands for, we‚Äôll still use the highways and bridges he built to get to the parks and beaches he designed. In what feels like an earnest attempt to highlight overlooked narratives from the city‚Äôs past, Motherless Brooklyn ends up bulldozing its way through history.