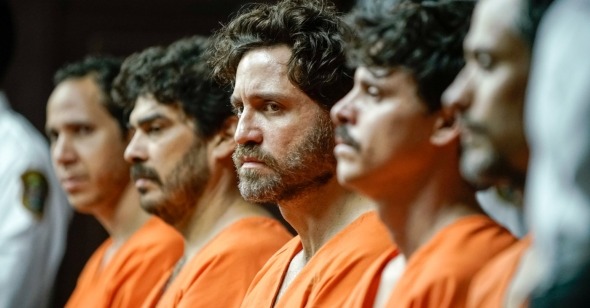 On Dangerous Ground
by Matthew Eng

During a conference held after the New York Film Festival press screening of his new docudrama Wasp Network, Olivier Assayas mentioned that in the nearly ten years since the debut of Carlos, his mammoth biographical miniseries about the mercenary Venezuelan terrorist Carlos the Jackal, he has rejected numerous offers to make another Carlos-esque project. That film‚Äôs leading man, √Čdgar Ram√≠rez, who was also in attendance as one of the stars of the writer-director‚Äôs latest, nodded in weary agreement. Wasp Network, a zigzagging, decade-spanning Cuban espionage epic that bears a generic similarity to Carlos, would appear to be Assayas‚Äôs answer‚ÄĒor acquiescence‚ÄĒto these requests. But looks can be deceiving.

In the opening minutes of Wasp Network, Cuban pilot Ren√© Gonzalez (Ram√≠rez) kisses his wife (Pen√©lope Cruz) and six-year-old daughter goodbye, hops on a bus to his airfield, and proceeds to fly a crop-duster to Miami, Florida. Once there, he defects from the Castro regime that has managed to survive the 1991 fall of the Soviet Union, in favor of the country whose economic stranglehold has slowed any attempts at reform and drastically diminished the quality of life for his compatriots. He does all of this, it should be noted, while barely batting an eye.

Assayas‚Äôs film unfolds in these sorts of clean, direct storytelling strokes, capturing in concise scenes the subsequent shock and pain of Cruz‚Äôs Olga, left to fend for herself and her daughter without any explanation from her husband; Ren√©‚Äôs recruitment into Jos√© Basulto‚Äôs Cuban exile aid organization Brothers to the Rescue; and the defection of Juan Pablo Roque (Wagner Moura), a celebrated major in Cuba‚Äôs air force, who one day swims to Guantanamo Bay with the proper identification hidden in his diving suit and, not long after, joins Ren√© in Basulto‚Äôs Miami-based operation.

From here, Assayas charts the divergent experiences of Ren√© and Pablo as the former struggles with his self-imposed isolation and strives to convince an unforgiving Olga to join him in America. Pablo, meanwhile, uses his defection as an occasion for upwardly mobile reinvention, aided by steady revenue from his side gig as an FBI informant. ‚ÄúDid anyone tell you you look like a movie star?‚ÄĚ Ana (Ana de Armas), soon to be Pablo‚Äôs wife, asks the swaggering, perpetually unruffled alpha male after being set up with him during a Sunday church service. He could pose to her the exact same question; the distracting, uniform beauty of this ensemble lends Assayas‚Äôs film an almost classical glamour that threatens to redirect our focus away from narrative events and the infrequent feint at political insight.

Assayas isn‚Äôt overly interested in plumbing the beliefs of his characters, and any exegesis comes in the form of bitter visual ironies‚ÄĒlike following a scene of the newly married Pablo and Ana luxuriating in their honeymoon suite with a stark shot of a machine dumping its wastewater in the Cuban tannery where Olga labors. Sometimes Assayas locates a comical critique in his decidedly unsubtle dialogue, as when Basulto, played by Leonardo Sbaraglia, drives home his assimilation by defining his political awakening through two American cultural figures, individualist John Wayne and collectivist Luke Skywalker. Assayas wants us to believe in these early scenes that Ren√© and Pablo have abandoned one regime for a more superficial and discreetly insidious one until he at last springs the mid-film switcheroo, via postproduction voiceover, that‚ÄĒspoiler‚ÄĒour protagonists are actually Cuban spies whose defection enables them to thwart the terroristic efforts of anti-Castro organizations like Brothers to the Rescue on American soil. Ren√© and Pablo are just two in a cell of spies known as the Wasp Network, overseen on the ground by agent Gerardo Hernandez (Gael Garc√≠a Bernal), who not long after comes clean to Olga about her husband‚Äôs real line of work, permitting her and her now 12-year-old daughter to join him in Miami.

As adapted from Fernando Morais‚Äôs 2015 nonfiction chronicle The Last Soldiers of the Cold War: The Story of the Cuban Five, this is a juicy and multifaceted saga with a series of reversals and revelations, and it might have made for a juicy and multifaceted film were it not for the odd slackening of Assayas‚Äôs approach. His abiding gifts as a stylist, dramatist, and mood-maker are only intermittently felt in Wasp Network, a work of structural coherence that is nonetheless drained of tension and urgency. Assayas has described his screenwriting process for this film as similar to his work on Carlos, involving extensive research that allows him to pinpoint the real incidents that can make up the skeleton of his screenplay. But Assayas is perhaps too content here to simply recount historical events rather than dramatize and thus complicate them. He has a sporadic feel for this material, but any personal connection or points of particular fascination are hard to discern.

What Assayas responds to in Wasp Network isn‚Äôt the covert machinations of his real-life subjects, but the behavioral and sensory details that he can incorporate to build the exterior and interior worlds of his characters: the growing flop sweat on the body of a palpably nervous young terrorist as he plants bombs in a group of Cuban hotels or the carnal abandon with which de Armas‚Äôs Ana slinks her way across a dance floor, magnetized by the husband who will prove to never really be hers to have or hold. These moments, the first an extended, crisscrossing sequence that gives the film a momentary jolt and the other a fairly conventional long take, are among the fleetingly few instances in which Assayas seems to respond to the project with verve and flair. Assayas is still the type of filmmaker who only needs to shift the camera away from Cruz mid-conversation to an oblique angle behind Ram√≠rez to disturb the straightforward nature of their marital spat and imply the actively listening presence of surveilling agents, a move that occurs right at the moment in which Olga implicates her husband, unaware that their apartment has been bugged by the FBI. But subtle embellishments like these can only do so much to improve scenes that foreground exposition at the expense of intricate feeling.

By the end of Wasp Network, Assayas has revealed his guiding theme‚ÄĒor his final stab at pathos‚ÄĒto be the fluctuations and separations of Ren√© and Olga‚Äôs family. Ram√≠rez and Cruz summon up a credibly bruised intimacy in their scenes together, while never entirely appearing at home or immersed in their characters. (It must also be asked why Cruz, after solidifying herself as such a forceful and emotionally intelligent actor during the last half of the 2000s, has been consigned to such thin, reactionary film roles over the course of this decade by the likes of Assayas and Asghar Farhadi, directors whose bodies of work know no shortage of three-dimensional female characters.) But this sentimental focus on a single family only ends up further blurring the political contexts and further consigning the actual communist convictions of his Cuban characters to the edges of the film.

Carlos and Wasp Network serve as uneven bookends to a prolific decade that has seen Assayas also tackle a deeply personal memory piece (the underrated Something in the Air) and commence one of the most fruitful partnerships of his career with Kristen Stewart in a pair of moody and meditative character portraits, Clouds of Sils Maria and Personal Shopper, which seemed to reinvigorate his art and push it into new existential terrain. Carlos, which so swiftly and seamlessly blended propulsive genre thrills with a sharp critique of its central subject, remains for many the apex of Assayas‚Äôs career, but the works that have followed over the past nine years indicate a maturation in his cinema, an ability to balance heady, surface-level pleasures with deep and often wistful reflection. Why, then, does almost any random scene from Carlos, written by Assayas in a comparable method as Wasp Network and made by many of its same craftsmen (including DPs Yorick Le Saux and Denis Lenoir, costumer J√ľrgen Doering, and production designer Fran√ßois Renaud Labarthe), manage to have more texture, kineticism, and complexity than even the strongest moments of this newer work?

It‚Äôs unfortunate that Assayas couldn‚Äôt end the decade on a higher note, but he is far too talented‚ÄĒand far too astute at selecting capable onscreen collaborators‚ÄĒfor Wasp Network to be a misfire. There‚Äôs a beautiful moment midway through the film in which Cruz‚Äôs flummoxed Olga begins to laugh with relief through her tears upon learning the truth about Ren√©, a small but organic reaction that evinces the visceral, spontaneous authenticity that is found again and again in Assayas‚Äôs films, yet is otherwise missing from this atypically by-the-book operation, the kind of lapse in inspiration that hampers even the most ingenious of directorial careers.