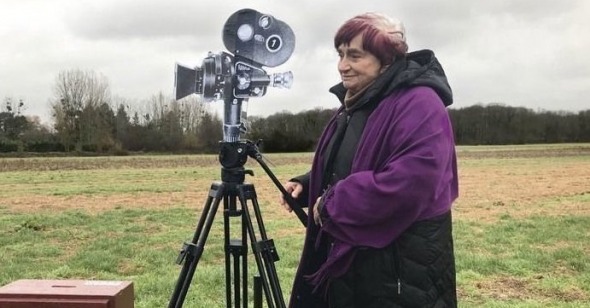 My Brilliant Career
by Susannah Gruder

Agnès Varda sent several cardboard cutouts of herself to the Oscars luncheon in 2018 after her JR collaboration Faces Places (2017) was nominated for Best Documentary Feature. It was as if, even if she couldn’t be there in person, she didn’t want to miss out on any of the fun. The move also signaled to the world that the director, who throughout her life seemed to be an indefatigable and ubiquitous force, would not be here forever. And yet, when Varda passed away on March 29 at the age of 90, it still came as a shock for so many of us, the finality of the news both painful and difficult to believe. Varda has said that she’s had three lives—as a photographer, a filmmaker, and a visual artist—but it almost seemed, like the numerous pet cats she’s surrounded herself with, that she could have had nine, continually reinventing herself and regenerating her style while staying true to her goal of filming people, as she’s described, with “empathy and love.” It’s fitting then, for a director who has for so long fused her life and her art, to find inspiration in her final phase. Varda by Agnès premiered at the Berlinale a mere month and a half before her death, and, like many of her films of the last ten years, it feels valedictory. Throughout, in the manner of The Beaches of Agnès (2008), Varda looks back at her work, attempting to connect the dots both for herself, and for her audience. Knowing she can no longer be with us, the ever benevolent Varda has left us with the next best thing.

There’s a sense of Varda’s impending absence from the beginning of the film, even though she’s perpetually onscreen. The opening shot is of Varda’s empty director’s chair sitting onstage with the iconic “Agnès V.” emblazoned on its back; as a jump cut places her into frame it soon becomes clear that she's in a packed theater, and this lecture has been heard before. If audiences are looking for new footage of Varda, they’ll be disappointed—Varda by Agnès cuts between clips from her films, documentation of her visual art, and various talks she’s given, without indicating locations or dates for the latter. In an interview with The Hollywood Reporter she said, “The film I’m presenting in Berlin is maybe not so entertaining, but I will no longer accept to do a talk. This is it; this is my talk. You show [the film], don’t ask me to come.” And so, not daring (or able) to argue with Agnès, we accept her “talk,” which loosely outlines the three main principles behind her work: inspiration, creation, and sharing. She illustrates how each of these ideas factors into her projects, in effect creating a framework through which to revisit her career.

One example she uses to discuss “inspiration” is the collective fear of cancer captured in Cléo from 5 to 7 (1962), and her desire to portray subjective time in the film’s unique structure. For “creation,” she sits jovially on a camera dolly with Sandrine Bonnaire, in some of the film’s only new footage, explaining how Vagabond (1985) was a portrait of “discontinuous traveling,” referring to the long moving shots that ultimately settle on Bonnaire’s Mona, the “enraged loner” as she moves through empty space. “Sharing” largely focuses on her visual art, which has given her the opportunity to present work outside the cinema, in spaces ranging from a gallery in Tokyo, where she exhibited her video installation “Bord du Mer,” to Normandy, where JR posted her 1954 image of Guy Bourdin on the side of a fallen German WWII bunker, as seen in Faces Places. Varda is one of the few filmmakers whose earnest attempts at explaining her work has become an art in itself—the self-reflexive commentary throughout films like The Gleaners and I (2000), The Beaches of Agnès, and Agnès Varda: From Here to There (2011) demonstrating how she’s followed her artistic instincts from one project to another. Like these works, Varda by Agnès serves as uniquely satisfying tutorial, not just on how to understand her art, but on how to live creatively.

“Sometimes,” Varda says in one of her lectures, “life chooses the subject.” L’opéra Mouffe (1958) was inspired by the “basic, ancestral fears” that images of her pregnant body could portray; One Sings, the Other Doesn’t (1977), by the women’s liberation movement exploding throughout France and the world. Perhaps most poignantly, life has repeatedly chosen the subject of her husband Jacques Demy, whom she has memorialized in both the fictionalized portrayal of his youth Jacquot de Nantes (1991) and in a characteristically playful, richly layered biographical documentary, The World of Jacques Demy (1995). In a similar display of synchronicity to Varda by Agnès, Demy passed away ten days after Jacquot de Nantes finished filming. She lingers on Jacques in her latest film, as her camera also lingered on his body in his final days—Jacquot contains interludes of Demy shot in extreme close-up, because, as Varda says, she “wanted to be as close to him as possible.” It’s intensely moving to see Varda employ a style of cinematic eulogy that we’ve witnessed before, but this time in the form of an elegy for herself and her body of work. In Varda’s hands, however, the film feels less like a tribute to a dead filmmaker than a last conversation.

A sense of admiration and pride is apparent in Varda’s film, but she is wary of seeming bigheaded. “I work hard to make honest cinema, but I’m not so pretentious as to think I can change the world,” she said. “We can sometimes change the mentality of people, or we can change the vision of people about the world or about other people.” Her ambitions, she claims, have always been modest, and here she explains how she was more interested in keeping things local than in capturing the world through her films. Her ability to find inspiration in the mundane has certainly kept her busy, and yielded some of her best work: from portraits of neighbors shot on her own street in Daguerréotypes (1976), to the murals and the artists behind them that often went unnoticed in Mur Murs (1980), shot during her time in Los Angeles. With age, Varda’s cinematic focus became even narrower as she zeroed in on her own life and work. Becoming one’s own subject is a natural progression for an aging artist—Pedro Almodóvar is doing it in his own way with his latest work, the thinly veiled autobiographical Pain and Glory. With Varda by Agnès, as she sits on stage, there’s no doubt that she’s the star.

The film spends much time on beloved films like Le Bonheur (1965) and The Gleaners and I, but it’s not merely a chronicle of greatest hits. Varda also chooses to highlight some of her work that’s not as well known, like The Widows of Noirmoutier, a video installation from 2004 featuring interviews with women from the town where Varda and her family vacationed. Varda also focuses on several unassuming moments from her work, like a scene of a woman playing with her hair in a laundromat in Documenteur (1981). Varda describes the “sensual solitude” of this act, and how Georges Delerue’s improvised soundtrack provided a “gentle ache” to this woman’s unconscious act, shot from behind.

Varda’s cinema is full of small moments like these, moments that she doesn’t want to see vanish with the changing tides. It’s hard to admit, yet there is a sense of anxiety in her final film, the same one that appeared in The Beaches of Agnès. That film, she says here, arose out of a “panic” at age 80, and an urge to tell her life story. It’s sensed again in Faces Places, as she laments her waning eyesight and bristles at JR’s suggestion that they get to work while there’s still time. But while there is a sense of sadness as Varda says goodbye to all she’s built and created, there’s also a release as she fades away in the final image. Peacefully, she whispers to us: “Disappearing in a blur, I leave you.”