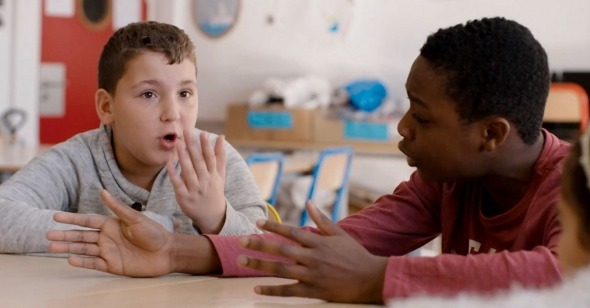 This Is Our Youth
by Demi Kampakis

Un Film dramatique is available to rent through Museum of the Moving Image's Virtual Cinema from February 26‚ÄìMarch 14, 2021.

If there‚Äôs one takeaway from Greta Thunberg‚Äôs climate revolution, it‚Äôs that kids have the power to change the world, and adults would do well to heed their insights now and then. Children are seldom given credit for their emotional intelligence, or the cogent ways they process and articulate the world around them. Fortunately, this isn‚Äôt the case with Eric Baudelaire‚Äôs latest, Un Film dramatique; a lovely and intimate work that explores the possibilities of the cinematic medium, what it means to tell a story, and the power and liberation in shaping a narrative‚Äîall through the eyes of middle-schoolers.

Shot over a period of four years, beginning in 2015, Un Film dramatique is the collaborative effort of 20 Parisian students at Dora Maar Middle School in the working class neighborhood of Saint-Denis. Baudelaire gave these promising young filmmakers, members of their school‚Äôs film club, a camera, slate board, and free rein to experiment with the form, provide a window into their lives, and bring their personal artistic vision to fruition. Although there were no guidelines for what their films had to be about, at several points Baudelaire prompts these youngsters by asking questions that get their creative and intellectual juices flowing, with politics serving as connective tissue. Ranging from discussions of terrorism and anti-Arab prejudice in the aftermath of the Paris terror attacks (the film began shooting shortly thereafter), racism, class discrimination, and immigration, their discourse often turns into lively debates. One of the most spirited and illuminating of these transpires early in the film, when two classmates litigate the meaning of the word ‚Äúorigins‚Äù in relation to ethnic identity. One student argues that it‚Äôs the country of birth that determines one‚Äôs origins, while another, a French native of Ivorian descent, counters that the word refers to one‚Äôs parental lineage. It‚Äôs heartening to see these young minds attempt to grasp and interrogate such thorny and nuanced issues; and the two eventually decide to settle the matter by looking up its dictionary definition (which supports the ancestral argument of the latter student, though it also makes note to exempt this definition from applying to the dynamic flux of human migration). Their back-and-forth also serves as an instructive, albeit unintentional, exercise in empathy, as the former student prods the latter to consider a hypothetical situation in which his Ivorian immigrant parents didn‚Äôt have their citizenship papers, to put him in the struggling shoes of France‚Äôs undocumented.

These ideas of nationhood and cultural belonging are further expounded upon and challenged in a later scene, when other students try to reach a collective understanding of what constitutes a country. Despite being taught that Martinique and Guadalupe are colonized French territories, they find it difficult to conceptually reconcile this fact with the vast distance shared between those territories and France; after all, they wonder, how can such a proximal region like Algeria be its own country while islands separated by a vast ocean are still a part of the EU? These 11- and 12-year olds‚Äô attempts to grasp these seeming contradictions raise issues of sovereignty and the legacy of colonialism.

By far the most memorable banter occurs very early in the film, when a young student makes his case for the necessity of ‚Äúbad people‚Äù in society. In his defense for the beneficial existence of criminals, he argues that a world exclusively made up of good, law-abiding citizens is a rather bleak one, for everyone would be forced to think and act the same way. Whereas most people would view a world devoid of criminality as aspirational and utopian, this young man sees social harmony as oppressively uniform, and his inadvertent invocation of Orwell is striking in its lucidity and erudition.

As these students contemplate the state of the world‚Äîincluding the nature of truth in news and contemporary media‚Äôs cynicism (one student refers to news outlets purchasing footage of the terror attack carnage from onlookers as ‚Äúselling death‚Äù), equality of opportunity in a capitalist system, the treatment of refugees and the contempt toward the homeless, and the hateful rhetoric of politicians like Marine Le Pen‚Äîthey learn to channel their frustrations and sense of helplessness by turning to the camera as a tool for creative agency and political engagement. Their boundless curiosity, imagination, and joyful creative spirit become powerful correctives against working class stereotypes that they themselves face‚Äîand in offering an outlet for these kids to dictate the conversation, Baudelaire is using cinema as a platform to make their voices heard, as they learn to negotiate representation and authorship on their own terms.

Because kids don‚Äôt possess the same cognitive dissonance that adults do, they‚Äôre able to regard the injustices around them with greater clarity, and the film benefits from its young subjects‚Äô refreshing candor. At the same time, Un Film dramatique becomes a treatise on the power of artistic collaboration, and there‚Äôs something to be said about the film‚Äôs socialist message. As Lora Davis astutely notes in her Locarno Critics Academy coverage, the film‚Äôs Marxist undercurrents can be seen in its subject matter‚Äîwith its explicit critiques of the pretentious attitudes held by the bourgeois‚Äîbut also in a more meta context through its cooperative approach.

As the years pass, marked by the visual changes of puberty, the students‚Äô filmmaking techniques, social awareness and philosophical musings become more sophisticated and deliberate. Un Film dramatique could have benefited from investing more time in this later-stage footage‚Äîbuilding on its experimental structure, and fleshing out its film within a film to provide a compelling formal juxtaposition, in the vein of William Greaves‚Äôs Symbiopsychotaxiplasm. Richard Linklater‚Äôs Boyhood also comes to mind, and it‚Äôs interesting to consider how Un Film dramatique‚Äôs temporal poignancy would‚Äôve resonated more had it been shot over an even longer period of time. Nonetheless, Baudelaire‚Äôs hybrid film metamorphoses into a textured testament to personal and spiritual growth, friendship‚Äôs creative symbiosis, and the cumulative effect of time and patience on a labor of love.

These auteurs-to-be use the language of cinema to not only test its boundaries, but provide a window into the innocence, forgiveness, empathy and resilience children possess. Even for these lower income students, the quality of their education stands in tall contrast to America‚Äôs hollowed public education system, as does the uniquely European culture of respect and reverence that Baudelaire exhibits towards his subjects and their rich interiority. Kids want to be heard, and Baudelaire‚Äôs film is a salient reminder that if we just stop and listen, we might be humbly surprised by what they can teach us.