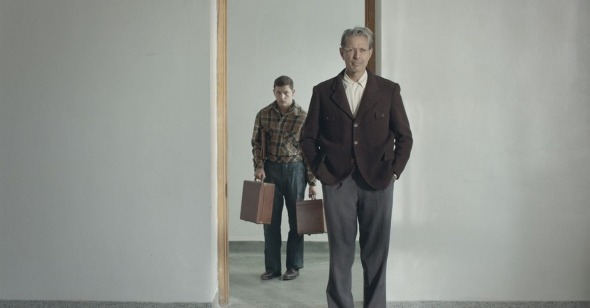 The Mountain, the mournfully surreal, fitfully arresting fifth feature by Rick Alverson, describes America‚Äôs postwar ‚Äúboom‚ÄĚ as a spiritual implosion. And from the beginning of the 1950s-set film there‚Äôs no doubt that the patriarchy is the problem. The movie‚Äôs twenty-year-old protagonist, Andy (Tye Sheridan), lives in a bare-walled, color-leached house with his stern father, Frederick (the reliably otherworldly Udo Kier). Andy obediently sits for meals with Dad, and even shares a workplace with him‚ÄĒFrederick is a figure-skating instructor at a local rink, where Andy mans the Zamboni and haunts the facility‚Äôs subterranean corridors in an ambiguous maintenance capacity‚ÄĒbut the glum, stoop-shouldered son is clearly suffering under the regime of the father, who has recently had Andy‚Äôs mother institutionalized, and barred him from seeing her. Mere minutes into the movie, though, Frederick collapses on the ice and abruptly meets his maker. Another father figure entirely‚ÄĒone operating with even more frightening impunity, on a much larger scale‚ÄĒproves to be the plot‚Äôs engine, whisking the increasingly withdrawn Andy away on what turns out to be a journey of self-annihilation.

A flamboyantly self-regarding medical man broadly modeled on the real-life Walter Freeman‚ÄĒthe physician who, adapting techniques conceived by Portuguese neurologist (and eventual Nobel Prize winner) Egas Moniz, pioneered, and tirelessly promoted, the now-infamous lobotomy procedure‚ÄĒDr. Wallace Fiennes (Jeff Goldblum) soon persuades Andy to join him on the road as his assistant. On a tour of the country‚Äôs most godforsaken mental institutions, Fiennes plans to lecture on and perform his patented ‚Äútransorbital‚ÄĚ lobotomy, an operation that in essence involves inserting an ice pick into the tear duct of a sufficiently hopeless case of mental illness, chiseling through the thin piece of bone that separates the eye socket from the brain, and proceeding to sever, more or less at random, fibers in the frontal lobes, in the interest of transforming the patient into a more docile personality. (Freeman had concocted the transorbital approach in the mid-1940s so he could perform lobotomies with assembly-line efficiency‚ÄĒand on an outpatient basis, without the assistance of an actual surgeon.)

For our fictionalized lobotomist, the object of the westward-leading circuit is to outrun the strengthening professional headwinds, the first wave of antipsychotic pharmaceuticals having recently been introduced, leaving fewer and fewer institutional decision-makers with an appetite for the operation in question, with its barbaric follow-through and uninspiring ‚Äúsuccess‚ÄĚ rate (one out of three patients ended up better off than before, per Freeman‚Äôs own estimates). Meanwhile, Andy‚ÄĒplayed by onetime Tree of Life kid Sheridan in a performance of radically minimal expressiveness‚ÄĒbetrays his own reasons for taking the job: Fiennes first introduces himself to the young man at a garage sale of many of his deceased father‚Äôs personal effects, as a family friend and, rather ominously, one of his mother‚Äôs physicians. His mother never far from his mind‚ÄĒThe Mountain opens with an aerial shot, in eerily dreamlike slow motion, of a figure-skating woman we can only presume to be her‚ÄĒAndy sees Fiennes as a means to an end, a long shot for learning more about what has happened to her. Though not before the doctor, rather presumptuously, takes it upon himself to assume the surrogate-father mantle: at the sale, Fiennes purchases a single item‚ÄĒAndy‚Äôs father‚Äôs pipe.

For a while here, Alverson seems to be taking an ambitious step forward, priming a broader thematic canvas and courting a wider midnight-movie audience. He has dialed back the willful‚ÄĒbut often productive‚ÄĒaudience antagonism of his previous two narrative features, 2012‚Äôs Tim Heidecker‚Äďstarring, Williamsburg-set The Comedy, which examined ironic distance as a sociopathological phenomenon, and 2015‚Äôs searching Entertainment, in which the Neil Hamburger act caused Gregg Turkington to have a personality breakdown in the Mojave Desert. Meanwhile, The Mountain‚Äôs radically spare, almost machined period design, by Jacqueline Abrahams, inevitably makes the film appear a more self-conscious affair than those two predecessors, both set in the grubby present day. In addition, Alverson‚ÄĒwho also wrote The Mountain‚Äôs script with frequent collaborator Colm O‚ÄôLeary and fellow director Dustin Guy Defa (2017‚Äôs Person to Person)‚ÄĒrefrains this time from being coy about the seriousness of his intentions, the put-on possibility having been ever present in The Comedy and Entertainment, with their jokes that often don‚Äôt land like jokes. Of course, the off-kilter line readings and overall malignant charisma Goldblum exudes have an obvious comic valence (that‚Äôs why you hire the man in the first place, and he has more to chew on here than he has had in years), but otherwise the bleakness of The Mountain pretty much goes unrelieved. The few signs of life that do enter cinematographer Lorenzo Hagerman‚Äôs forbidding compositions‚ÄĒa bouquet of flowers in an otherwise anemic-looking room; the lemon and lime wedges on the unwanted bowling-alley Tom Collins that Fiennes orders for Andy; the blood that at one point suddenly streaks the operating doctor‚Äôs hand, heralding a torn vessel and a botched procedure‚ÄĒhave a brilliantly startling, punctum-like effect. Otherwise, the tone of the film proves a little too numbing.

As the psychosurgical road show proceeds from institution to institution‚ÄĒtheir homogeneous populations (white women, black men, white men) having in common a habit of haunting corridors like shadows of themselves‚ÄĒAndy learns that sharing a hotel room with Fiennes, not just a reckless physician but an alcohol skirt chaser to boot, is its own special kind of hell, and he begins to sympathize more and more with the patients he‚Äôs charged with photographing for medical posterity. Andy himself, though, doesn‚Äôt become any less remote, or much easier to sympathize with, given Sheridan‚Äôs scrupulously bottled-up presentation. In its middle stretches, The Mountain seems like maybe not so much of a departure for Alverson after all: in form, it comes to resemble a sort of hybrid of The Comedy and Entertainment, suturing the social diagnostics of the former onto the on-tour narrative template of the latter, while following both in putting forth a protagonist who frustrates audience identification.

The Comedy‚ÄĒwhich starred Heidecker as a particularly corrosive subgenus of white-male entitlement, an emotionally impoverished, post-hip son of privilege slumming his way around gentrifying North Brooklyn‚ÄĒfound Alverson operating with an amazingly fine scalpel. Here his tool kit (perhaps not unlike that of Dr. Fiennes) contains an array of blunter instruments. It‚Äôs clear that much of The Mountain‚Äôs lack of symbolic subtlety is by design: there‚Äôs that pipe that Fiennes buys; the anxious fascination with sex that is one of the only preoccupations that Sheridan‚Äôs Andy is unable to put a lid on (we are privy to his gender-bending dreams); and the squirm-inducing spectacle of the lobotomies themselves, during which the Frankensteinian doctor administers electroshock as anesthetic before proudly inserting his instrument, as if planting his flag in the prone patient‚Äôs brain. For good measure, the father-figure count here runs to not two but three, once Denis Lavant‚Äôs extravagantly cracked, ambiguously New Age Svengali enters the picture.

Alverson‚Äôs diagnosis of midcentury national ills that have, by implication, metastasized into the present‚ÄĒamong them roughshod patriarchy, the viability of shameless hucksterism as a path to power, and a medical establishment not set up to serve its patients‚ÄĒall too often feels on-the-nose as well. But viewers who have gotten this far are well advised to continue scaling The Mountain. The film‚Äôs final movement is by far its strongest passage, the spiritual-vacuum atmosphere giving way to something much more combustible and harder to parse, as Andy and Fiennes stop near California‚Äôs Mount Shasta, and hole up in a clean-lined modern home with Lavant‚Äôs character and his daughter, Susan (Hannah Gross), ticketed for a lobotomy but very patently of sounder mind than her father‚ÄĒwho has, of course, requested the surgery on her behalf. During this section, Fiennes begins to interpret the mounting personal tensions between him and Andy as broadly antisocial impulses on the young man‚Äôs part, as is the doctor‚Äôs wont; meanwhile, Lavant‚Äôs rambling, mystically inflected monologues, ferally rasped in an otherworldly (and subtitled) French-English patois, signal an id-unleashing that may prove contagious. What ultimately transpires has unexpected metanarrative implications, all of a sudden thrusting the very issue of audience identification to the fore, and forcing viewers to reconsider their initial evaluation of certain key persons on-screen. If only the rest of The Mountain, which too often lapses into a one-note soapbox speech about the social, institutional, and spiritual corruption of 1950s America, were half as interesting as this late conceptual leap. Here‚Äôs betting, though, that Alverson will soon be putting the idiosyncratic, uncompromising style he has developed over the course of this decade to more fully rewarding use.