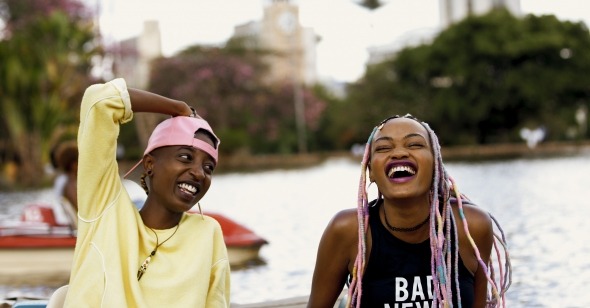 A Tale of Two Nairobis
By Sarah Fonseca

A provocative tension exists between Wanuri Kahiu’s Rafiki and “Jambula Tree,” Monica Arac de Nyeko’s acclaimed short story on which the film is based. While de Nyeko addressed the harsh realities facing Kenyans in same-sex relationships, Kahiu—vocal in her desires for afrofuturism and “fun, fierce, and frivolous” art about her continent—opts for the optimist’s imaginary: what would it look like if two queer girls transcended prejudice? Rafiki was banned by the Kenya Film Classification Board ahead of its Cannes premiere in 2018, yet it wasn’t erotic content that unnerved those in power and triggered censorship (its grazes will seem bewilderingly tame to those who have the luxury of regularly cruising LGBTQ film festivals). Instead, it was Kahiu’s compassionate handling of the young love between Kena Mwaura (Samantha Mugatsia) and Ziki Okemi (Sheila Munyiva). “They said it wasn’t remorseful enough,” she noted at the Festival. “When we said we wouldn’t re-edit the film, the film was banned. They felt that the hopeful ending was promoting homosexuality.” Ironically, the tenderness that makes Rafiki a radical work in Kenya also risks making the film, opening this weekend in New York, a bit too anodyne to some American moviegoers.

De Nyeko’s story is epistolary, written by Kena to Ziki, penned five years after their community forced them apart. The letter is catalyzed by Ziki’s return to Kenya after being shipped away to London by her parents, the well-to-do Mr. and Mrs. Peter Okemi. Kahiu spares us the tears. She sets her retelling in the colorful splendor of adolescent romance in lieu of its aftermath. Their youth is pricelessly void of cerebral internal conflicts about attraction. Here, everything is external and free of nostalgia. It is a time for soccer matches, in which willowy Kena masterfully takes on the boys and works in the humble convenience store that belongs to her father, Mr. John Mwaura; and for hair-braiding chains, with Ziki flanked by her two best friends. The girls’ first eye-lock feels both inevitable and anticipated, like the next verse of the sunny Kenyan soul music that comprises Rafiki’s score. Its lengthy romantic sequences, as lensed by Christopher Wessels, are saturated with rose and bubblegum pinks that Kahiu says she selected to conjure a feminine perspective through “softness and lightness and innocence.” The two seek sanctuary in an abandoned van, its cabin decorated with pillows and blankets, the clandestine setting acknowledging the improbability of their romance ever going the distance. The “jambula” in de Nyeko’s title refers to a regional plum tree, its fruits resembling breasts, under which Kena and Ziki’s discreet courtship both transpires and is exposed in the short story. Despite intimations of their relationship’s fate, for a bulk of Rafiki’s 83 minutes, everything feels generously full and ripe with possibility.

Depending on the viewer, Kahiu’s universal, accessible dialogue—co-authored with South African filmmaker Jeanna Cato Bass—could serve as potent testament to the shared ideas and feelings within all great love stories, or they could feel threadbare, too reminiscent of those in earlier coming out narratives like Maria Maggenti’s The Incredibly True Adventure of Two Girls in Love (1995) or Dee Rees’s Pariah (2011). Despite the oft-predictable tempo of films in this subgenre, there is something singular here, most notably in Rafiki’s performances and its embrace of a girlhood that defies western gender roles.

Mugatsia, a first-time actor whom Kahiu initially encountered at a party, is enchanting and animated. At the slightest touch or flirtatious glance, Kena’s boyish stoicism betrays her with wide-eyed surprise, an unrelenting grin, or both in rapid succession. The more thinly written of the two, Munyiva’s Ziki only wants to see the world beyond Nairobi: there is no final destination or vision of what she’ll do once her suitcase is unpacked. Yet she nearly makes up for her lack of goals with her bullheadedness. When Kena catches her shoplifting a soda from her father’s convenience store, Ziki effortlessly stares her observer down, cracks her cotton candy-colored braids over her shoulder like a cat o’ nine tails, and skips away. Later, she all but orders Kena to stop selling herself short and, given her good grades, consider becoming a doctor instead of a nurse. This is not a film where the slightest detail of female gender ambiguity—a backwards ballcap or an affinity for athletics—lazily signals assertiveness. “My body is allergic to dresses,” Kena sighs as Ziki slides her into a shift before a church service. Yet she still wears it.

Rafiki has more subplots and supporting characters than its runtime can ably withstand: at best, these figures function as representatives for the sexual expectations and hypocrisies of Kenyan society. Kena and Ziki’s fathers, played by Jimmy Gathu and Dennis Musyoka, respectively, develop into opponents in a not clearly drawn political election (the outcome of which viewers are not privy). Their rivalry illuminates the class divide between the candidates (the divorced Mwauras being the poorer of the two) and renders the girls’ friendship taboo long before romance comes into play. Kena’s motorbike-riding friend Blacksta (Neville Misati) is allowed to treat his paramour poorly in public, while Kena is stuck showering Ziki with affection behind closed (van) doors. The same is true of Mr. Mwaura, whose recent marriage to and impregnation of a younger woman have plagued his ex-wife, but apparently not decimated his run for office. Stage actor Vitalis Waweru plays Tom, a non-speaking, and regularly bashed gay character who appears intermittently throughout the film—a guardian angel in a starched white shirt.

With 80 percent of the population identifying as Christian, religion remains a root of Kenyan bigotry, though Kahiu never fully allows faith-motivated nastiness to overtake the narrative; those seeking stories reconciling belief and identity will be better satiated by movies like Prayers for Bobby (2009) or Boy Erased (2018). If anything, the director seems as sympathetic toward religion as she has been accused of being towards homosexuality. In two early scenes set in the village church, both families attend services. There is a pointed understanding that this is a unique place where Nairobi’s social classes are encouraged to come together: from the village gossips to the moneyed elites. During these moments of worship, private lives are removed from the sermon. In the first scene, Mr. Mwaura and his former wife bicker about his unborn child as they stand at a safe distance from the pulpit. In the latter scene, Ziki paws at Kena as a sermon on the perils of homosexuality inconsequentially drones in the background. These moments of covert family drama and queer mischief drive home the church’s hypocrisy, but they also underline the institution’s equity. In choosing complicated pleasures and hopefulness over unrelenting misery, Kahiu smoothly guides us to a conclusion of optimistic heartbreak.

“If you read ‘Jambula Tree’ critically it’s really more about the community than it is about the relationship between the two main characters,” Monica Arac de Nyeko told Africa’s Mail & Guardian the year her story won the Caine Prize for African Writing. It is in Rafiki’s final act that we realize Kahiu was working closer to the bone of de Nyeko’s work than it initially might have seemed. The parents and friends who orbit Kena and Ziki have their own share of problems that command the viewer’s attention. By the time they see and acknowledge what is right in front of them, we’ve already witnessed glimmers of humanity within a community that will inevitably come to do so much harm. When Kena’s mother brings her to the pastor to pray over her, her mother’s convictions—having brought her solace through her own relationship turmoil—have more gravitas than the theatrical byproducts of those beliefs. The power of Kahiu’s film is its articulation that faith can be as primal as what draws the girls to one another.