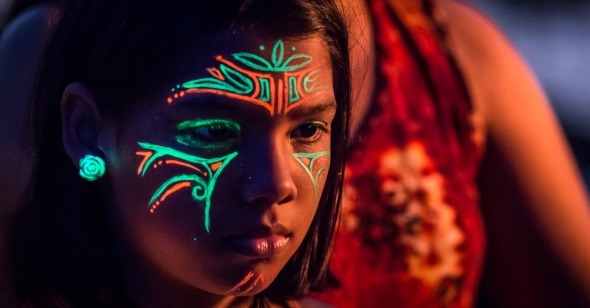 Half Life
by Emma Piper-Burket

There is a tiny water-logged island in the Amazon river where the borders of Brazil, Colombia, and Peru meet. It's called La Isla de la Fantasia—fantasy island—and it provides the backdrop for Brazilian writer-director Beatriz Seigner's sophomore film, Los Silencios, which premiered at Cannes’ Director's Fortnight in 2018. In this place, the murky geographic boundaries are matched by an equally hazy division between the living and the dead. The film follows a mother fleeing the ongoing violence in Colombia that killed her husband. As the film opens, Amparo and her two children, Nuria and Fabio, arrive from a long, silent boat journey to the island. Her aunt greets her, “Hello my child. Welcome home my love... I can't believe you're still alive.” In the days that follow, Amparo looks for work and waits for reparations from the Colombian government, as the children adjust to school and their new life. It's a tenuous existence for the small family, with struggles at each turn: the cost of school uniforms, the cost of a lawyer, finding work. Amparo steadily overcomes each obstacle, all the while grieving for her lost husband, having conversations and arguments with him, asking for his advice.

La Isla de la Fantasia floods four times a year, and then re-emerges as before; the narrative of Los Silencios behaves in a similar manner, revealing visions or bits of information before submerging them time and again. While this changeability could create a sense of pure fantasy, Seigner doesn't give preference to one reality over another. She maintains realism by embedding viewers in the physical landscape with long static shots and limiting soundtrack to noises from the surrounding atmosphere of the island—living and dead inhabit the same space.

As Seigner was writing the script she spoke to the inhabitants of the island, and claims that at the end of every interview she would ask what scared them. Says Seigner, “Then everybody would tell me about the ghosts of the island, about how they came and went among the living.” She incorporated these stories into the script, weaving her narrative between realms. When German naturalist Alexander von Humboldt set off on his exhibition through this region of South America in 1799, his motivating force was “to find out about the unity of nature.” His writing from this period led to Western science's earliest understanding of ecosystems and the idea that every aspect of life is interconnected to a greater whole. In Los Silencios, Seigner finds a similar sense of unity, one heavily influenced by local tribes of the region who make decisions communally and also communicate fluidly with those who have passed on, incorporating their needs with those of the living.

Nearly a quarter of a million people have died in the half a century of conflict in Colombia.In one particularly powerful scene towards the end of the film, the dead assemble to discuss a possible peace deal between Colombia and the rebels and how it may affect them. The film crew left the camera rolling, as the nonprofessional cast reflected in real time on their own personal experiences living with the ongoing violence in their region, saying “we are at war with ourselves” and “we must forgive.” In an earlier scene the living villagers assemble to discuss a proposed development project on the island. “Yesterday a rich man came over with the Mayor. They said they want to buy the houses on the island. They want to build a casino and they want to build cabanas and hotels on the island. They said this island doesn't belong to Colombia, nor Brazil or Peru so they want to work on the island...” The villagers debate, most of them don't want to sell their land. “What happens if we refuse to sell our land? The army will come, or the police or the paramilitary, and force us out... We’ll die here and keep fighting against selling!”

In both of these scenes, Seigner makes palpable the tension between the local communities and the government and oil companies and corporate development. This political undercurrent throughout the film gently draws our attention to the many layers of pain the exploitative colonial legacy has left—and continues to make—on the landscape and people of this region. Seigner artfully weaves together this history with the lives of her protagonists, both living and not. Los Silencios is not a puzzle film, though it would seem to invite viewers to solve its mysteries. Who is living, who is dead? Though there may be answers, they seem to wash away as soon as they appear, as if to say: any boundaries we construct are strictly of our own invention. What remains instead are the cords that tie us to our communities and to each other.