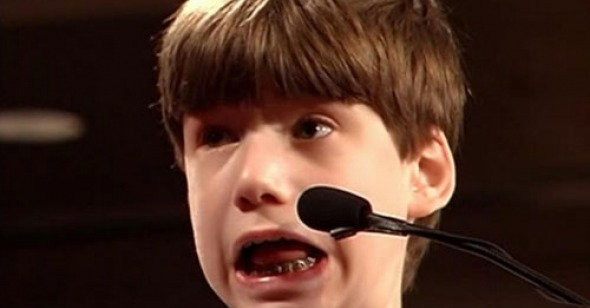 The world is simply too damn big. It’s too multifaceted, tells too many stories, contains too many plotlines. For the artist or the storyteller, the process of creation is less about finding a story to tell than a winnowing, a removing of excess noise. The good artist provides a window of appropriate proportions, framing the world in compelling fashion. This is even truer for documentary than it is for fiction. The understanding underlying nonfiction filmmaking is that the director, capable of taking his/her camera and filming any subject, anywhere in the world, has chosen the topic onscreen, and we as spectators put our trust in them. Prior to any concern with storytelling ability, technical skill, or the like, we leap, hopeful that the filmmakers’ frame surrounds an intriguing picture.

Spellbound, the documentary by Jeffrey Blitz, is the equivalent of a Matisse in a Mickey Mouse frame. Distracted by the humorous, gauche crust, it is easy to neglect the meaty, satisfying repast contained within. Blitz’s film (his first) follows eight 13-year-olds as they prepare for the annual National Spelling Bee. Like other documentaries of a representative nature (Hoop Dreams comes to mind), the film lives or dies on the basis of the individuals chosen to be filmed. Luckily, all of Spellbound’s prospective spelling champs contain a fascinating world unto themselves.

Contrary to its stated intentions, the film is ultimately about the American fascination with competition, family life, adolescence, and talent. Not really contrary, I guess; for the film does follow the progress of the 1999 National Spelling Bee, and does dutifully proceed to the conclusion, when a winner is crowned. But like many journeys, by the time the stated end has been reached, the point of the trip has shifted.

Blitz breaks the film into two discrete sections, the first quickly and compellingly sketching the path taken by each of the eight selected contestants to get to the competition. The second segment follows the progress of the two-day championship, round by round, as the competition proceeds to its inexorable conclusion. It’s the small, caught-on-the-fly details that form the heart of Spellbound, and provide its emotional heft. The film captures an essential truth of adolescence, its simultaneous gawkiness and glory. What unites these children is their status as exceptionally gifted young minds, and their being glimpsed within the web of family relationships that has brought them to the brink of national success. A handful of the competitors are the children of immigrants, and the immigrant’s dream of scholastic glory as a means of leapfrogging to success is a potent one for these parents. Angela’s father Ubaldo, a Mexican immigrant who works as a farmhand, cannot speak English, and dreamed of the potential for his children to reach heights he never could. Neil’s father, an immigrant from India, quizzes his son on thousands of words a day, faintly praising him for spelling a total of one word incorrectly. Spellbound gives these children the complex portrayal they deserve, presenting them both as individuals with a freakish degree of knowledge in one rather unimportant field, and as adolescents struggling to find their place in their family, their school, their community.

What elevates Spellbound above the usual run of American documentary filmmaking is its passionate populist devotion to the transcendent experience of the everyday. The film’s shift from the individual, small-scale portraiture of the opening sequences to the wide-angle drama of the Spelling Bee itself is reminiscent of nothing so much as the monumental closing scenes of Erick Zonca’s brilliant The Dreamlife of Angels. Much like that magisterial French film, Spellbound communicates the utter ordinariness of the extraordinary events displayed, underlining its contention that behind any one of the contestants lies an equally compelling story. Similarly, as one of the film’s interviewees points out, what’s so poignant and compelling about these 13-year-olds is their short-lived status. Blitz shows a number of former spelling champions, all of whom have gone on to lead gratifyingly mundane lives. None of the spark visible in the 13-year-olds, their sheer zest for the minutiae of existence, lingers in the faces of the former champs. Adulthood lurks around the corner for each of these master spellers, and the glow of their youthful exuberance in its final moments is as bright, and as fleeting, as the aurora borealis.