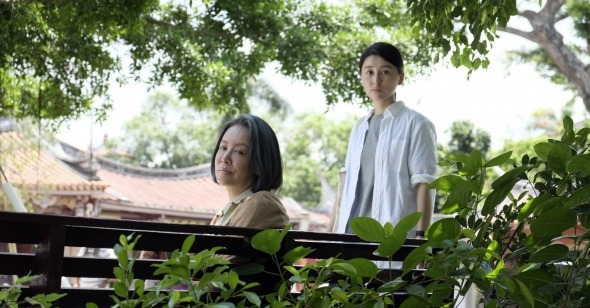 The Exiles
by Nick Pinkerton

There is nothing metaphorical about the connection between a fractured China and one fractured family unit in Ying Liang’s A Family Tour. Attuned to the rhythms of often stilted conversations played out against the banal, sunny backdrop of public spaces in contemporary Taiwan, A Family Tour doesn’t have much truck with symbols. All that Yang has done is added an element of ticking clock urgency when describing in dramatic terms a predicament not unfamiliar to Chinese families separated by fathomless amounts of red tape, families scattered across so-called Greater China—the phrase used to refer to the culturally and economically enmeshed Mainland, Taiwan, autonomous territories of Hong Kong and Macau and, sometimes, Singapore. (The film, billed a Taiwan-Hong Kong-Malaysia-Singapore coproduction, is very much a product of this China-beyond-China, the wider WeChat world.)

The movie begins in a welter of Visa paperwork and pre-flight preparations by Ka-ming (Pete Teo), who is traveling from Hong Kong to Taiwan with his wife, Yang Shu (Gong Zhe), and their young son, Yueyue (Tham Xin Yue), and is anticipating every possible bureaucratic hurdle ahead. There’s something more to the tension surrounding this trip than the usual precautions and the stress of traveling with a child, but only gradually can we glean the reasons for this. No vacation, this journey is seemingly meant to combine business and pleasure: Yang Shu, a filmmaker, is attending the (fictional) Formosa Film Festival, where her work is being honored, but she is also going to rendezvous with her seventyish mother, Chen Xialon (Nai An), who still lives in Mainland China, and whom she hasn’t seen outside of an online chat platform for five years.

Chen is on a bus tour with a chartered itinerary, and rather than join the group, Yang and family must tag along independently in hired cabs. Yang, we come to understand, is in exile from Mainland, and she can only see her mother by maintaining a ruse, telling anyone in the tour group who happens to ask that she is only a friend of the old woman, and she keeps the in-the-know tour guides—the leader is one Ms. Peng, played by an actress billed as “33”—happy with little gifted red envelopes, those universal symbols of payola in the Sinosphere.

The actual duty of greasing palms falls on Ka-ming and Chen. Ka-ming appears some years older than his spouse, and in many respects has an easier rapport than she does with her mother. Originally from Hong Kong, he regularly travels to the Mainland in his capacity as a festival director, and therefore more frequently sees the woman. Where Ka-ming and Chen both recognize the necessity of doing business through the usual channels, and are well-practiced in gritting their teeth into the requisite winsome, respectful smiles when facing functionaries, Yang can barely hide her disgust at the entire process, which strikes her as an almost spiritual affront. She is intractable in this, and sometimes insufferable, as the righteous and zealous sometimes must be.

Though not entirely flattering, the Yang character must be taken as something of a gender-flipped self-portrait of A Family Tour’s director. Like Yang, Ying was born in Mainland China, but now calls the autonomous territory of Hong Kong home. Ying’s reasons for doing so are, like his heroine’s, connected to his having run afoul of Chinese censors: both Yang and Ying attracted their ire by making a film about Yang Jia who, having been denied justice after being needlessly detained for riding an unlicensed bike, interrogated, and beaten by Shanghai police in 2008, laid siege to a police station with Molotov cocktails and a knife, killing six officers. Yang’s film, which we hear dismissively discussed by a cab driver and finally see screened for some moments in the film’s close, largely took on the perspective of Yang Jia’s mother, as does Ying’s treatment, 2012’s When Night Falls, which starred none other than Nai An. (The actress is excellent here, though a bit too sturdy and unlined to be nearing 70 and in ill health.)

When we meet Yang she has not made a movie in six years—this one broke Ying’s similar dry spell of feature filmmaking—though she is trying to put together a fictional movie that will incorporate the events of Hong Kong’s 2014 pro-democracy Umbrella Revolution, whose subject matter echoes Ying’s 2016 short A Sunny Day. She may be free now from the Mainland surveillance state, but she is no more free of Mainland influence than anyone in Greater China, especially those with family left behind. In Yang’s absence, her mother pays for her sins; among the gifts from home that she brings her daughter is a recording discreetly made during a police visit following Yang’s flight, in which the officials lean on the old woman, sifting through the family’s history as though searching their genes for traces of Yang’s “anti-government and anti-society mentality.”

The relationship between daughter and mother is marked by chronic shyness, unease, and guilt—Yang takes the recordings as a reminder of her failures of filial piety. Sitting down to audition a Taiwanese actor for a role as a nursing-home-bound father in her proposed film, Yang breaks into involuntary tears, but around her mother she is often withdrawn, glum, and generally uncomfortable showing emotion. Central to A Family Tour is the struggle for freedom of speech, and the different ways that can be interpreted. There’s one that Yang, as a controversial figure, fights in public forums against government-imposed censorship, and then the one that, privately, she must contend with herself to overcome—for even once actual suppression has been escaped, one must still deal with the censor in one’s own head.

Hardly a harsh word is spoken between mother and daughter, but they are at odds all the same, and what Ying has sought to capture above all else is the yearning behind this awkwardness, the groping towards common ground—in the both the senses of a homeland and a shared intimacy. The actresses, and sundry other characters, are seen frequently in locked down medium long-shots that allow us to simply watch what transpires between or among them. His treatment never goes in for the picturesque. Though a sort of package holiday travelogue of Taiwan, A Family Tour would never be mistaken for a cinematic brochure inducing viewers to come visit fabulous Formosa—there is a trip to some historical museum featuring tacky mannequins of early Presbyterian missionaries like James L. Maxwell, and desultory shuffling around bits of park and waterfront and other sites of indeterminate importance.

Taipei is reduced to a hotel room and a series of anonymous restaurants and cafés very near to the category of what Gilles Deleuze called any-space-whatevers; Hong Kong is, per another cabbie’s enthusiasm, only “a shopper’s paradise”; as for Mainland, you can’t go home again. Quite literally, that is: Chen informs her daughter that the old homestead back in Sichuan will soon be bulldozed, the grave of her husband, Yang’s father, moved. She had no say in either matter, naturally, but the government compensation, she notes in both cases, was quite fair—an instance of her quiet acceptance of the arbitrary, unchecked usage of official power that drives Yang to the edge of rage.

Chen may, beneath her pacific demeanor, feel the same rising bile, but she has long ago learned to choke it back with a grin—though not, perhaps, without cost. The trip comes to a crisis when a recurring illness hobbles the older woman and, needing treatment, she must decide if she will defect with her daughter, or return to her adoptive home in Sichuan. That Chen is herself a displaced person is revealed in the interrogation recordings, where the officer mentions her family’s forceful relocation from the northeast to contribute to “infrastructure” out west back in 1957, a year of Anti-Rightist purges following the Hundred Flowers Campaign.

This is the closest to mutual understanding that they come. When Yang drafts a groveling self-critical recanting of her offenses with the possibility of a repatriation in mind, Chen remembers ghostwriting the same sort of statements for her parents—in absence of shared roots or continuous family tradition, a shared history of displacement and self-abasement will have to do. But the generation gap between parents raised in the tumult of the Great Leap Forward and those who came of age in turn-of-the-millennium century China is more like a canyon, and it is wider still for children in certain areas of the arts: It is doubtful that Chen ever disapproved, per se, of her daughter’s plans to become a dissident festival circuit filmmaker, only because she very likely has no idea what a film festival was.

Ying sometimes drapes his themes on the surface of his movie rather than integrating them in its visual patterning—the film festival’s slogan, prominently visible, is “No One Can Stay an Outsider.” Such transgressions only somewhat dilute the plangent and poignant qualities of A Family Tour, exemplified in one of the film’s closing scenes, when Chen dozes gently before the film that her daughter has sacrificed so much to make. There will be no revelation in this viewing that allows Chen and Yang to understand one another before the credits roll, but in this moment Ying gives us something better—a reminder that understanding is not a prerequisite for love.