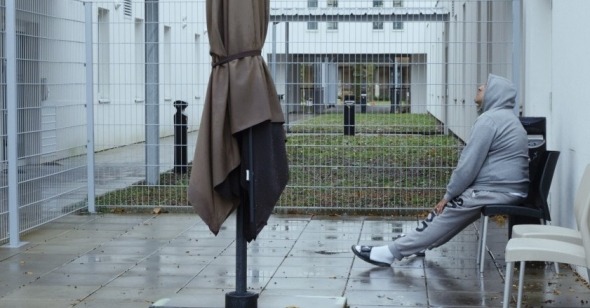 Behind Closed Doors
by Nick Pinkerton

Raymond Depardon is no stranger to the accoutrements of lock-up—to chicken-wire netting, reinforced security doors, and the unmistakable numbing monochrome of institutional walls. His 1982 film San Clemente, for example, documents the final days of an asylum located in the Venice lagoon; while Urgences (1987), shot in the 24-hour “Le service des urgences psychiatriques” department of Paris’s Hôtel Dieu, sits in on the admission interviews of individuals in the grips of extreme, oppressive psychological conditions. In addition to his practice as a documentarian, Depardon still better known as a Magnum photographer, and in this, too, he has returned to images of confinement, as in his indelible shot of a prisoner in solitary, jogging in the courtyard of a high-security facility in Maison Central de Clairvaux, France, his endless rotations having worn a circular path into the grass.

In 12 Days, Depardon returns again to the psychiatric clinic, a setting that has historically offered up a bounty for documentarians, from John Huston’s Let There Be Light (1946) to Frederick Wiseman’s Titicut Follies (1967) to Wang Bing’s ‘Til Madness Do Us Part (2013). Depardon’s latest was shot at l’hôpital Le Vinatier in Lyon—his home territory, as well as that of the Lumière brothers—and what he has rendered from his shoot speaks to the peculiarities of mental health administration in rational, benevolent, bureaucratic early 21st-century France as Huston’s does to postwar America, as Wiseman’s does to Massachusetts in the middle 1960s, as Wang’s does to remote Yunnan Province in the contemporary People’s Republic of China, or as San Clemente does to Italy at the beginning of the ’80s. Depardon is not out to expose naked cruelty, neglect, and dereliction of duty, as Wiseman and Wang do in their films, but something much more subtly invidious: the revolving-door efficiency of the state apparatus, mechanized service behind a blandly humane smile.

An opening text card explains the legal background of what we are about to see. Following a 2013 law, patients in France being held without their consent in a psychiatric hospital must, within twelve days of hospitalization, be seen by a “freedom and detention judge,” a magistrate who considers the detainee’s stated desire for freedom against the registered opinions of psychiatrists at the facility in which they are being held. The film opens with the camera drifting through the halls of Le Vinatier, the first of several interstitial sections, scored by Alexandre Desplat, which explore the dimensions of the facility—further drifting along its corridors, taking in the cries alleging demonic possession that issue from behind the closed door of what’s identified as the “Salon d’apaisement,” or “Comfort Room”; watching patients following their obscure courses in perambulating about the grounds; or observing the placement of the institution within the city, seen finally through the blue of morning mist.

By far the larger part of 12 Days, however, is comprised of the hearings described, shot-reverse shot dialogues between patient and magistrate. It is, essentially, a “talking head” movie—a term sometimes used as a lazy pejorative, though the success of such an enterprise relies on the quality of the talking and the interest of the heads, here uniformly high. Rare among photographers-turned-filmmakers, Depardon has never much been interested in translating the idea of a “decisive moment” into flashy framing, rejecting what he has called “the image for its own sake” to concern himself instead with the moving-image as a vehicle for testimonial, a means of bearing witness.

The hearings that we are privileged to look in on, ten in total, introduce us to a cast of men and women varied in age, apparent mental ability, and background. There is a brittle-seeming office worker prone to crying fits, beset by a sense of being persecuted by her coworkers, who moans “I’m an open wound.” There is a stubbornly suicidal woman who asks only to be allowed to exit this mortal coil of her own volition. There is an analphabetic paranoid schizophrenic of 20 who claims to have come into possession of an AK-47 when foiling a terrorist plot, who confides to his judge “I have the madness of a human being and the mentality of a sub-mental” before stating his ambition to become a professional soccer player. There is a polite and soft-spoken man originally from Angola who, we learn, stabbed a woman 13 times in 2008, though subsequently he assures the judge that he has learned the law, knows that he must “respect France.”

One might note that, in this film made in the cradle of liberté, égalité, fraternité, the majority of the judges and lawyers are white Europeans, while many of the inpatients that we see are not. In this matter, as throughout the movie, Depardon allows a viewer sufficient space to draw their own conclusions. The approach to presenting the hearings on screen is affectless, appearing almost to follow a set visual schema determined by procedure. The reluctant inpatients engage in a dialogue with their judges, then the patient’s appointed lawyers offer up their own summations. The lone exception to this is the final hearing, in which a young woman asks that her lawyer speak first, before launching into a desperate plea to be allowed to care for her two-year-old daughter, whom she has thus far seen for “15 hours this year.” This scene plays as a true tour de force, for in spite of his apparently neutral approach to these scenes, Depardon is constantly making important decisions as to when to cut between patient and judge—he is sure to catch one magistrate shuffling papers and delivering a curt, conclusive “bien” following a patient’s detailing her personal history of sexual assault—or when to cede a patient full command of the widescreen frame.

So the young woman pleading for her child gets her close-up, alone against the off-white hospital walls that dominate the palette of the movie. It comes out that she was herself raised a ward of the state, and she pleads that the opinion of the social workers who know her personal history—“Every home in the Rhone knows what I’ve been through,” she avers, not without ominous implication—be weighed against that of the psychiatrists, who don’t. It is a petition both impassioned and articulate, as are many of those heard throughout the film. Even in the cases where the social desirability of the subject’s incarceration is far more clearly established than it is here, it is nearly impossible not to be moved by the manner in which the patients articulate their desire for liberty, the urgency and the resourcefulness of their expression, even if the terms of that expression are false, deceptive. In the preceding scene, a bony, aquiline, neck-bearded man who claims personal acquaintance with a left-wing politican (translated here as Bernie Sanders) begs that the court reach out to his reticent father. “He doesn’t know… how to express himself. Like how much he loves me, wants to see me… wants to do things with me,” the man tells the judge, not without emotion, and until he is ushered from the room she refrains from noting that the subject in fact murdered his father some ten years ago.

It is, as I’ve said, impossible not to be moved by these statements, but the very function of the judge’s role in these trials seems to be to remove the feeling from the system, to safeguard it from the fallibility that comes with emotional engagement. They act as an intermediary or buffer between clinician and inpatient, an apparently neutral third party who can give a gloss of officially overseeing outside authority to the dictums of the doctors. The trials that we see in the film are sat between four different such judges, but in practically every case the final result is the same—a validation of the psychiatrist’s official endorsement recommending further confinement, an informing of the subject that they may appeal the decision within the next ten days, a handing out of official paperwork, and then on to the next one. Each judge displays a calm, reassuring, yet authoritative manner; beyond this, it is unclear what their particular qualifications for this work are, and what leeway they have, if any, in rendering judgment on the cases before them. “I’m not at all a doctor,” one announces at the outset of a hearing. “My role is simply to verify that the procedure required by law has been respected.” If they feel pity or sympathy towards the men and women sitting before them, as in many cases they appear to, there is no evidence that they have agency to act on it. If they have the capacity to intervene or overrule the opinions of the clinicians, they are never seen to do so.

Depardon’s approach is patient, observant, unobtrusive—he owes as much to the Lumières as any documentarian working, save perhaps the Sergei Loznitsa of Austerlitz (2016)—but beneath this calm one feels the faint tremble of an anger held in check, a bottled-up scream. It’s there, too, in his two previous studies of the French justice system, Délits Flagrants (1984) and The 10th Judicial Court: Judicial Hearings (2004), or in his most famous works, his “Profils paysans” trilogy of 2001-2008, movies that exhibit a tenacious grip on a disappearing peasant tradition, and in so doing implicitly reject the streamlining, standardizing effects of bureaucratic modernity. Depardon’s is a body of work that opposes the decency and flexibility of a bespoke, handmade society against the impersonality and intractability of our ready-made one, which allows for none of the accounting of difference, and condemns us to hopelessly chartered courses. He begins his film with a quote—“The path from man to true man goes by way of madman”—from Michel Foucault’s 1961 History of Madness, which finds “madness” defined during the 19th-century regimentation of the medical and judicial professions, and a modern bureaucratic, administrative state that demands the establishment of norms and a suppression of the odd, exceptional, and irrational.

The formally considered, precisely arranged 12 Days is, paradoxically, a movie suffused with horror at the human cost of by-the-book regulation. One patient offers to his judge that perhaps everyone in society is a schizophrenic, but I very much doubt Depardon, here exposing the workings of a system that fails to recognize difference in the name of efficiency, is the sort to accept that everyone in society is any one thing. He might, however, agree with Foucault that we are all of us doing time in one kind of confinement or another—all condemned to run the same unvarying path, leaving our mark by wearing a groove into the earth beneath our weary feet.