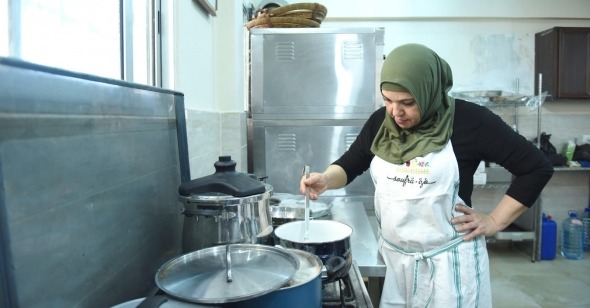 This Woman’s Work
By Mayukh Sen

Mariam Shaar, a Palestinian refugee, has lived in Bourj-el-Barajneh, a refugee camp padded with 50,000 inhabitants in the span of one square kilometer, her whole life. Bourj-el-Barajneh lies on the outskirts of Beirut, but it’s a place with invisible borders, and it effectively exists in a silo. Residents are not permitted to rent any property outside, due, in part, to what Shaar calls the “mental separation” between the camp and the city. In other words, it feels like less of a refuge and more of a trap. In Soufra, a new documentary from filmmaker Thomas Morgan, it certainly looks like one, too: the camera snakes through rundown alleyways where graffiti lines beige walls as children fill gallons of water jugs with hoses. When the camera peers upward, the buildings are so tall that one can barely see the sky. Here is a place devoid of opportunity. If one was basically born into the camp, as Shaar was, mobility seems like a pipe dream.

Until we get to the kitchen, that is. It’s an oasis that seems to exist in an alternate universe to the refugee camp. The camera, in the film’s opening scenes, focuses mostly on women’s hands as they flatten dough, chop lettuce and tomatoes, and pour stuffed grape leaves onto large serving platters. Where the preceding shots of the camp were drab and funereal, these frames suggest possibility. Morgan’s film concerns a group of Syrian refugees who have corralled together, working under Shaar’s guidance, to begin a catering company called Soufra, an Arabic word that means “big fancy table with delicious food,” as Shaar explains later in the film. Cooking gives Shaar’s women, most of whom have fled war-torn Syria, as much pleasure as it does purpose.

Soufra is a compact film that runs just over an hour, yet it covers a two-year expanse. The film documents the process of Shaar attempting to expand Soufra from a humble catering company into a food truck business, only to be beset by bureaucratic hurdles, including raising money via Kickstarter to purchase the truck and applying for the licenses necessary to operate it.

The film seems to have two different palettes: when set in Bourj-al-Barajneh, the colors are dull and drab, evoking dead ends. Scenes of the women cooking, preparing, and plating food, though, feel like jolts of energy. The kitchen is a place where women can both work through their despair and plot their way out of it. There are shots of plumes of steam billowing from stovetop pots, potatoes being cut lengthwise, and pomegranates smacked with knives to force the seeds out; they linger in the memory. They remind one that the activity of cooking is not merely a distraction from the routine and decay of life in the camp; for these women, it’s a way of burrowing out.

After all, this is a world, as Shaar tells us, where women spend their time at home. They are conditioned to see themselves as mothers first, then wives. As a result, they’re taught to forget that they’re women, people who have the right to exist for themselves and on their own terms. Any other vocation beyond caring for a child or husband is tertiary, and that includes cooking, which becomes coded as a duty rather than a skill.

In one of the final scenes, Shaar treats her employees to a screening of 2014’s Chef, subtitled in Arabic, meant to soothe their sadness after they learn that they haven’t gotten the requisite approval to own a food truck. A scene in which Jon Favreau mills about a restaurant kitchen plays before them, subtitled in Arabic. “See your work?” Shaar asks, pointing to the screen and talking to her employees. They don’t bat an eye; cooking, and translating that proficiency into capital, is as much a man’s work as it is a woman’s.

Morgan’s sober, unsentimental approach to the interactions between Shaar and her women prevent Soufra from becoming a film that traffics in uplift. Soufra does not dwell on the delusion that the worth of an immigrant’s life hinges on her productivity. His film is a subtle stand against the common refrain “immigrants get the job done” (a particularly rampant fantasy since the election of Trump) and all that sorry slogan conveys: that immigrants can assert their humanity only if they provide anything of worth to the status quo. Soufra does not ask what needs immigrants are serving for the imagined recipients of their labor. Instead, the film answers what these women are doing for themselves.