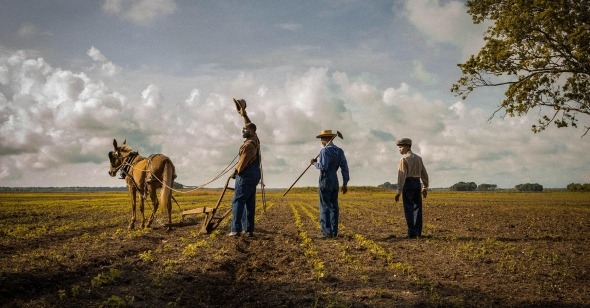 Back to the Earth
By Michael Koresky

“No point in fighting ’em. They’re just gonna win every time.” An unspeakably sad line in Dee Rees’s Mudbound, delivered by middle-aged Hap Jackson (Rob Morgan) to his twenty-something son, Ronsel (Jason Mitchell), upon insisting he apologize to their white landowners the McAllens for a perceived offense. The infraction was that he dared to try exiting a local store through the front door, when, as the eldest McAllen, the hideous bigot known as Pappy (Jonathan Banks) had reminded him, blacks go out the back. In the moment, Ronsel, “forgetting his place,” reminded Pappy that he has just returned from battle overseas, where he was fighting the Nazis, only further stoking the white devil’s ire. Such a confrontation, which would be considered minor in anyplace other than the Jim Crow south, leads to Ronsel being tagged as a problem, an uppity one to keep an eye on. Hap asking Ronsel to simply fall into line—to apologize, to not fight them—is a plea for his son’s survival, and would seem to be an expression of complete defeat. But it’s that second sentence—“ They’re just gonna win every time”—that reverberates, as it’s difficult by the film’s bitter end to see this as completely true. Despite the infrastructure set in motion centuries ago to keep only whites in positions of power, Mudbound elegantly depicts how such ingrained racism only serves to aid whites in digging our own graves.

As any work set during this country’s ignoble past ought to be, Mudbound is preoccupied with deeply entrenched systems, economic forces beyond the characters’ control that nevertheless dictate codes of behavior. Based on a 2008 novel by Hillary Jordan narrated by six characters, three black and three white, the film charts the intertwining fates of two families—the Jacksons, sharecroppers; the McAllans, landowners—in rural Mississippi directly before, during, and after World War II. The McAllans are not exactly comfortable in their roles as overlords, especially Laura (Carey Mulligan), whose more elevated socialite dreams are shattered after marrying the insecure, blustering Henry (Jason Clarke), whose life seems driven simply and unthinkingly by what he sees as his right to possess something of his own—never mind that our country was based on false assumptions of land ownership that will undoubtedly ever be reconciled or remedied. Lurking in the shadows is rancid patriarch Pappy, whose only motivation seems to be to make sure that black people “know their place” and to keep the system status quo. Though essential to the story’s forward motion, Pappy, crucially, is one of the only major characters not given his own narration—he doesn’t deserve a voice. Employing multiple character voiceovers is a risky yet rewarding move for Rees, helping both to anchor the film in a panoply of perspectives but also serving to complicate rather than clarify everything: multiple points of view always do.

In adapting Mudbound, Rees has accomplished an uncommon sense of a past in constant yet leisurely motion, and a remarkable roster of lived-in performances has helped achieve this. First and foremost among them are Morgan and Mary J. Blige, who, as Hap and Florence Jackson, communicate an unforced, body-and-soul weariness that speaks to not only their own fatigue but that of legions of people supposedly free but who are nevertheless still enslaved by economic and political hierarchical systems. As sharecroppers, the land on which they toil is not really theirs, a constant reminder that they’re meant to keep giving to whites, regardless of how much the U.S. government owes them, spiritually and literally. Rees takes great pains to mostly represent these harsh themes through gesture and incident rather than having her characters speak them, allowing centuries of in-the-marrow American racism to simply be the unspoken reality of these people, and therefore a reality not to be eradicated or reckoned with by film’s end but rather an unrelenting force that shapes and destroys all. Blige, ingeniously cast for the same combination of stoicism and vulnerability she invests in her music, gives a performance that’s pure internalization, her façade only subtly betraying her despondency and anger; Morgan also works from the inside out, a representation of the oneness of physical and emotional labor in which every line and motion speaks to a deeper understanding of the intricate network that helps humans survive.

In more purposefully external performances, Mitchell, as eldest Jackson son Ronsel, and Garrett Hedlund, as Jamie McAllan, Henry’s wayward younger brother, portray later generations of Americans less willing to so causally accept daily injustice, their perspective largely shaped by their experiences in the war. Both are ravaged by what they’ve seen and done while fighting from P-51 Mustangs over Europe—which Rees captures in scenes set exclusively from the point of view of their respective cockpits—their alienation upon returning to America made all the worse by the ongoing, bloody war at home. (To draw parallels between the two spaces, at one point Rees intercuts Hap falling off a ladder and breaking his leg with one of Ronsel’s graphic aerial battles.) Henry’s PTSD manifests as increasingly crippling alcoholism, while Ronsel cannot readjust to life in Mississippi, especially after being temporarily stationed in a Belgian town and getting a taste of a society in which he wasn’t tagged as subhuman “Over there I was liberated…here I’m just another nigger pushing a plow,” says Ronsel at one point, one of the few times a character speaks directly about disillusionment and inequality, and all the more powerful for it.

Dee Rees’s adaptation is “novelistic” in the best sense, meaning that it propels itself forward at a brisk enough, chapter-like clip to incorporate all of its various strands and events, but that it manages to take its time, allowing the viewer to feel immersed in era and place, to settle in with the characters as they go about their daily routines. Rachel Morrison's drab and picturesque cinematography alternately frames and withholds beauty: there are long shots of the landscape undeniably gorgeous in their weatheredness, but it’s the faces that stand out. After seeing it, one will likely remember the small pleasures, such as watching Blige enjoy the rare treat of a chocolate bar, as much as the stomach-churning events on which the plot pivots. Even though Mudbound is a film of high drama and terrible incident—and builds to a violent, telegraphed climax—Rees appears to be much more invested in the process of unfolding, building layer upon layer of tension, while never forgoing the in-between moments and delicate interactions that make history palpable as more than just a backdrop.