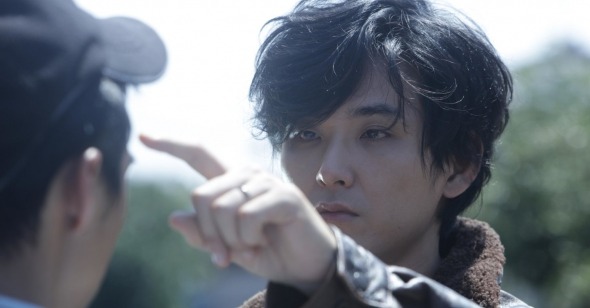 Kiyoshi Kurosawa’s genre-hopping latest, Before We Vanish, an adaptation of a 2005 play written by Tomohiro Maekawa, depicts both the terror and comedy that result from selective, forced amnesia. The memory removal here is not a voluntary procedure, as in Eternal Sunshine of the Spotless Mind, but an act sprung upon the unsuspecting. While the circumstances of this erasure in the film are supernatural, the power of its implications is real. The film opens with teenage Akira (Yuri Tsunematsu), a vision of innocence in her schoolgirl uniform, having just slaughtered her entire family (grandma included) in their cozy suburban home. She licks blood off of her hand while a newly purchased goldfish flips about in a pool of red on the floor. Akira next struts down the middle of a busy highway, grinning as she causes a semi truck to jackknife, leading to much vehicular mayhem. It’s a riff on the played-out “casually walking away from explosion” move, exonerated from charges of cliché here due to the incongruousness of the perpetrator.

Between this berserk introduction and an emotional climax of bedside redemption rhapsodizing the power of love is a blend of comedy and talky science-fiction, spattered with the occasional burst of ultraviolence. There is a formal adventurousness here typical of Kurosawa, who has seesawed between genres both throughout his career (horror, sci-fi, and dramas like Tokyo Sonata) and within individual films (Doppelganger transitions from a loss-of-identity thriller to a sort of satirical romance). The constant element is a sure-footed aesthetic precision, for which crew members like regular DP Akiko Ashizawa also deserve credit—the elegant framings and subtly disorienting lighting and production design that make Kurosawa films reliably enjoyable on a surface level, even when their takeaway “messages” are a little confused.

It turns out that murderous Akira is in fact an alien who has snatched the body of a Japanese teen, and she’s on Earth along with a few colleagues to harvest the human race for their knowledge and “conceptions,” as a kind of box-checking final errand before invasion and extermination. The aliens’ method of data mining is charmingly low-tech—no probes or scanners needed, they just lead their victim into thinking about a concept, then tap their forehead with a finger. The concept is then the property of the alien race, and lost forever to the earthling. Graphic designer Narumi (Masami Nagasawa) is introduced dragging her alien-invaded husband Shinji (Ryuhei Matsuda) home from the hospital. Reminiscent of Kyle MacLachlan’s Dougie Jones from Twin Peaks: The Return, the childlike Shinji seems to have forgotten some basics, like how to move, as well as his history of infidelity. His cheating is the reason their marriage was basically a formality before this invasion, making it awkward that he now begs her to be his “guide.” All the aliens seek such a guide, a human to navigate them between conception thefts. Though it helps accelerate world destruction, being a guide at least temporarily spares those chosen, and in the case of journalist Sakurai (Hiroki Hasegawa), who guides mop-topped hipster alien Amano (Mahiro Takasugi), provides firsthand scoops as news stories happen. Narumi even welcomes the new pliable, if bumbling, reboot of her husband, resisting attempts to treat him since “we’ll fight again if he goes back to normal.”

Those vampiric forehead taps alternate between terrifying and funny. When Shinji blithely steals his sister-in-law’s conception of family, her tear-streaked face registers utter loss and despair; it was the crux of her life, and the moment mines real human fears of memory loss, evoking the pain of Alzheimer’s disease. When the boss at Narumi’s design agency—a creep with a pink sweater tied over a pink button-up who provides unsolicited shoulder massages—has his conception of work lifted, he quickly regresses into infantile horseplay, launching paper airplanes and gleefully smashing architectural models. It’s a laugh riot, but Kurosawa and Maekawa are also plumbing subtexts about the sandcastle-like fragility of the often arbitrary concepts upon which we choose to found our lives. When Shinji attempts to enter a neighbor’s house uninvited, his confusion upon learning about the concepts of possession and property ownership is poignant—those things are unnatural.

The premise of identity-thieving aliens most directly invokes any version of Invasion of the Body Snatchers, though the brightly lit interiors and glassy urban exteriors (familiar from previous Kurosawa films) are far from the shadowy small town noir of the 1956 film or the hairy and overcast San Francisco apocalypse of the 1978 remake. Kurosawa has also name-dropped John Carpenter as an influence, with Starman being the most germane reference point. There is something of the Ira Levin sense of paranoia about those closest to you here, too, though the most contemporary cousin is Michael Almereyda’s superb Marjorie Prime. Both are based on cerebral stage plays that use sci-fi plots as ways to investigate issues of identity, memory and, indeed, the point of it all. And both take place largely in blinding sunlight (Sean Price Williams’s photography in the Almereyda film is similar to Ashizawa’s here). Marjorie Prime benefits from being more grounded and unburdened by as many off-the-wall tangents, while Before We Vanish shoots the moon with its depiction of the end of the world and its eventual platitudinizing for the omnipotent panacea of love, which is well-intentioned but blindsiding after so much of the preceding irony, absurdity, and bloodshed. Not negating its fine acting (blank-faced Matsuda is particularly moving) and intriguing ideas on memory and forgetting, the many tonal shifts over the course of the film’s 129 minutes make the concluding grand gestures feel unearned and confusing, as if they’ve been teleported in from another movie. The outrageous brashness of that wild opening may have been too tough an act to follow—it’s one of only two or three scenes in which you feel Kurosawa fully break free from the confines of his stagebound source. Nevertheless, one is always conscious that a master genre filmmaker still in command of his gifts is at the helm, and the many pleasures the film provides are testament to the fact.