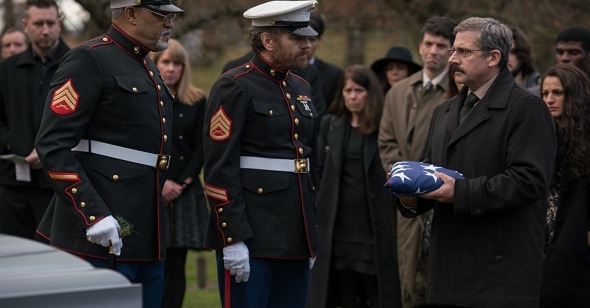 With All Due Respect
By Justin Stewart

Retreating from the shadowless primary colors and nostalgic primal pleasures of his aggressively energetic ode to college jockdom, Everybody Wants Some!!, Richard Linklater’s new film, Last Flag Flying, opts for a dreary, overcast palette. Except for a scene in Midtown Manhattan, Pennsylvania doubles for the Eastern Seaboard as the backdrop for its trio of middle-aged Marines’ travels and their complex relationships with each other and their country. Both films, similarly concerned with the comforts and latent menace of platonic male relations, also originate in 2005, when Linklater was poking at their screenplay drafts. Obviously, neither took off then, but now that the filmmaker is enjoying some deserved post-Boyhood clout in his mid-fifties, he’s able to realize some long-treasured projects. There’s some dust on the old script by Linklater and Darryl Ponicsan (who wrote the novel)—an odd discussion of Eminem and crowbarred-in reactions to televised current events (Saddam’s capture and George W. Bush)—and an occasional tin ear for old-guy dialogue (one character actually says “I’m getting too old for this”) that suggest Linklater might still be more comfortable with the casual-philosophical badinage of those a decade or more his junior, but the 12-year gestation gives the film the distance crucial to its angry, sad, but, in hindsight, wise perspective on the early Iraq War years.

Ponicsan’s novel is a sequel to his 1970 The Last Detail, picking up with the same characters 34 years after the events of the earlier book. But Linklater’s film is not a sequel to Hal Ashby’s 1973 New American Cinema masterwork of profane tenderness and latent rage. Linklater has said that he can’t help it if some assume it’s a sequel, asking in the Los Angeles Times, “Can you have a sequel with guys who are not named the same, and different actors, with everything else so different?” After so many years of screenplay revisions and tinkering, the resemblances now barely go beyond Steve Carell’s Jack Nicholson-as-Billy “Badass” Buddusky mustache and the trio’s racial makeup. If one wants to spite Linklater and make the comparison anyway, Last Flag Flying suffers, but that’s not a knock considering its appropriately staid, middle-aged milieu and the fact that a collaboration on the level of Ashby, Nicholson, and Robert Towne was a rare blessing even then. There is nothing in the new film to match the emotional rollercoaster of the hotel room beer binge bullshitting session in The Last Detail, but on the other hand, many scenes here best Ashby’s worst (his unfunny skewering of New York New Agers).

It’s not a competition, and what Linklater and Ponicsan are interested in here is the reflexive bickering, goofing, reminiscing, and reconnecting that ensues when three Marines who served together in Vietnam are thrust back together. Carell’s Larry, a.k.a. “Doc,” initiates it, showing up unexpectedly at the Virginia bar run by Sal (Bryan Cranston) and, after a night of heavy beer drinking, dragging the latter to a church hours upstate, where their comrade Mueller (Laurence Fishburne), formerly a “drinker, gambler and cocksman” of renown, preaches. Over dinner at Mueller’s, Doc reveals the cause of his soft-spoken sadness—his wife’s recently dead of cancer, and his son, Larry Jr., a Marine, was just killed in Iraq. Sal and a reluctant Mueller agree to accompany Doc to a burial at Arlington, which then becomes an As I Lay Dying–like errand involving a trip to Dover Air Force Base to retrieve the body, and then a road trip to see Larry Jr. buried at home with family after all three grow increasingly disillusioned with the U.S. government’s dishonesty.

It’s simultaneously a homefront war drama (modestly scored with plangent piano and guitar accents), buddy comedy, and road movie, including jaunts on Amtrak trains, a Peter Pan bus, and a U-Haul. These confined spaces means there’s a surfeit of quality time spent with the threesome, which is a pleasure in the case of Carell and the amusingly supercilious and semi-righteous Fishburne, though one’s tolerance for Cranston’s salty old cuss Sal is tested. An alcoholic bachelor (with “neither chick nor child”), Sal is a fidgety irritant, constantly drumming (on the steering wheel, his lap, wherever), chewing, or high-fiving, crudely punning (on Little Richard’s predilections, for example) and offering inanities like, “I love cold pizza.” While his boor is a recognizable type, some of Cranston’s “free man” affectations don’t resemble human behavior, like picking up a glazed donut by stabbing the hole with his finger. The actor might still be in thrall to some of his hammier tendencies from the later seasons of Breaking Bad; in his defense, Sal isn’t supposed to be likeable, and if you’re swayed by locker room talk like, “I had a johnson that used to stand up and watch me shave,” he might win you over.

Between Sal’s leather jacket, Doc’s muted Eddie Bauer, and Mueller’s sober black pea coat, the three flirt with caricature, but the performances, at least by Carell and Fishburne, complicate and enrich their characters. Carell tweaks the hangdog sad sack (effective thanks to the hint of real despair behind his eyes) that’s been his primary screen persona since Little Miss Sunshine with intimations of Doc’s past life as the threesome’s fall guy, which meant a couple of years in Portsmouth Naval Prison. Fishburne, sporting neatly trimmed, bluish-white hair and goatee, alone justifies Cranston’s obnoxiousness when Mueller’s sneering disgust for Sal overpowers his empathetic piety.

While Sal is naturally cynical about his country’s intentions and everything else, it’s Mueller who feeds Doc’s growing distrust with his cool decrying of the United States’s WMD justification for war against Iraq and acts of deceptive propaganda, like the media blackout of troop coffins. Doc is soon resisting strongly worded military recommendations for a proper Arlington burial for his son and uttering “why”—a basic question which extends from his son’s unheroic death to his own messy Vietnam tours. The film hedges its criticism in the home stretch, embracing a patriotism based on love of country if not respect for authority. But even this qualified patriotism, complete with flag and uniform reverence, is a bad look in relation to an earlier scene in which a secondary character admits to a war crime in Iraq, “lighting up” a Baghdad neighborhood after one insurgent shot Larry Jr. The resultant confusing mixed emotions, though, are appropriate for a film set in 2003 during a now wildly unpopular war, and particularly appropriate since it concerns veterans of another. A constant thinker and questioner, the director of such many-sided works as Fast Food Nation, Bernie, and the Before trilogy is most comfortable within the tangles of these kinds of knotty intricacies.