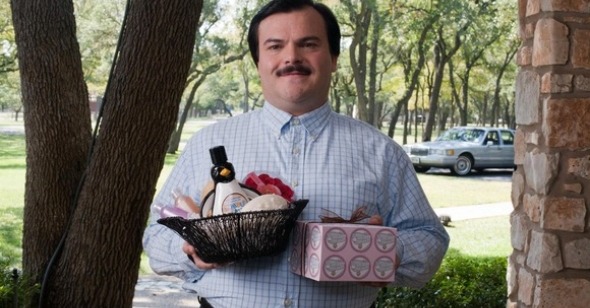 It‚Äôs hard to conceive of an ad campaign less appropriate than the one being used to promote Richard Linklater‚Äôs Bernie. Admittedly, this would be a hard film to publicize, so thoroughly, and disquietingly, does it complicate normal generic categories. That said, this quite mysterious and melancholy film surely deserves better than a one-sheet of a dazed-and-confused Jack Black flashing his impish grin off-screen while flanked by costars Matthew McConaughey and Shirley MacLaine, all of them against an anonymous and sickly beige background, the title‚Äôs ‚ÄúI‚ÄĚ dotted with a kooky smear of blood; it looks like nothing more than a nineties-era Pulp Fiction knockoff (‚ÄúViolence and laughs, together at last! Clay Pigeons, anyone?‚ÄĚ).

Don‚Äôt let the poster scare you off from watching Bernie; let the film itself do that for you. Linklater‚Äôs latest doesn‚Äôt really fit comfortably into what we‚Äôve come to expect from a Linklater film: it doesn‚Äôt have his oft-deployed limited narrative timeframe, instead dragging its story out to an indeterminate length; and it focuses not on philosophically ambitious outsiders, but rather on a handful of obtuse, considerably non-introspective folk who are fully ensconced in their communities. This is not a film fueled by garrulous and good-natured young people questioning themselves and the world around them, but rather populated by those who‚Äôve been around the block long enough to stop asking. Think of the wayward souls searching for immortality through intellect in Slacker and Waking Life, the curious kids terrified of the future in Dazed and Confused, the desperate-to-self-identify wannabe romantic couple in Before Sunrise and Sunset, even the vengeful twentysomethings stuck in a teenage past of their own minds in Tape‚ÄĒnone of them know who they are, and that‚Äôs what makes them, oddly, complete. In contrast, Bernie Tiede (Black), a mortician beloved in his close-knit town of Carthage, Texas, is a seeming jolly old soul who never appears to have a moment of reflection. His lack of self-examination would make him frustrating to be around in real life; as a movie protagonist it makes him downright terrifying.

Not only is Bernie not what we might have predicted (or wanted) in a Linklater film, it‚Äôs also not what we‚Äôve come to expect from a black comedy (it‚Äôs ‚Äúfunny‚ÄĚ only insofar as its humor is connoted by its ambiguously chipper tone and cheery visual palette), a true-crime story (it has no satisfying crime-and-punishment arc and lacks any sort of authorial judgment), or a star vehicle (though it puts its lead front and center, it diffuses him considerably). It‚Äôs unclear whether Linklater intended to so confound such categories; it‚Äôs also unimportant. Bernie‚Äôs oddness grows out of its essential humanity, which in this case, also means its unknowability. We never fully understand why people act the way they do in the film, which doesn‚Äôt seem so radical a notion‚ÄĒuntil you realize its central incident is a murder.

Both complicating and justifying its existence is the fact that Linklater‚Äôs film is based on a true story. The real Bernie Tiede, a portly funeral-home manager, confessed in 1996 to the fatal rifle-shooting (in the back!) of eighty-one-year-old Marjorie Nugent, a wealthy widow who had become his friend and benefactor. The context of the crime, and the standing in the community of the killer and victim‚ÄĒBernie was well-liked; the Scrooge-like Marjorie was despised‚ÄĒare related to us via a gallery of talking heads, played by honest-to-goodness Carthage locals, most of them elderly, dispersed throughout the film. Underlining the authenticity of this Greek chorus is the striking contrast in the casting of megastars MacLaine, as Mrs. Nugent (the actress‚Äôs well-practiced cantankerousness reaches new heights of discomfort here, as it‚Äôs usually cushioned by surrounding adorability, as in Steel Magnolias or Guarding Tess) and McConaughey, as prosecuting district attorney Buck Davidson. As the opaque centers of this fiction-documentary hybrid, Black, MacLaine, and McConaughey become resolutely artificial, in essence enacting a knowingly farcical version of these allegedly real events‚ÄĒall related to us through hearsay.

If the slang and homily‚Äďspouting locals come across as biased, Linklater and his cowriter, Texas-based journalist Skip Hollandsworth, surely do not. Many will find its refusal to ‚Äútake sides‚ÄĚ ultimate evidence of Bernie‚Äôs lack of a point (if there‚Äôs any film in its director‚Äôs oeuvre it resembles it‚Äôs The Newton Boys, which had little interest in the machinery of a crime story, focusing on the what rather than the why, and always keeping a strange smile on its face). But it‚Äôs also what makes this hard nut so fascinating. While he had previously exploited Jack Black‚Äôs mischievous grin and roly-poly physicality to brilliant effect in School of Rock, here Linklater locates a profound hollowness in him. What‚Äôs most haunting in Bernie is not Black‚Äôs possibly sociopathic behavior but his soulful singing; this is when he‚Äôs most articulate‚ÄĒwhether wailing hymns at funerals, belting out a rousing rendition of the spiritual chestnut ‚ÄúLove Lifted Me‚ÄĚ in his car, or leading ‚ÄúSeventy Six Trombones‚ÄĚ in a community theater production of The Music Man‚ÄĒbut also most baldly, and blankly, performative. A transparent comic actor, Black is unsettling in Bernie for being unreadable. His actions aren‚Äôt disturbing for their violence but for their illogicality.

Did he kill the woman simply out of exasperation with her ill treatment of him? Or was he interested in her money? More questions: is Bernie gay, the Carthage residents wonder in a friendly manner, while at the same time evincing a clear preference to keep their once-golden boy firmly in the closet? And what personal demons drive the film‚Äôs version of Buck Davidson to so want to punish Bernie? Linklater doesn‚Äôt seem to care, perhaps suspecting that the answers to these questions don‚Äôt matter a whit, and that projecting alleged psychological truths onto his characters would only serve to falsely resolve irresolvable human conflicts.