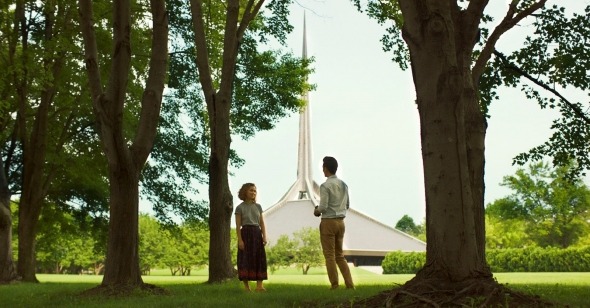 Tucked in the southeastern corner of Indiana, the small city of Columbus is something of a minor tourist mecca—and it’s not because Mike Pence was born there. In the middle decades of the 20th century, it became the unlikely locus of a modernist boom, the project of an industrialist, J. Irwin Miller, who wanted to draw the highly educated to his Columbus-based company. Miller made a bet that architecture would do the trick, so he footed part of the bill for dozens of public buildings by some of the great architects of the 20th century: I.M. Pei, Eliel Saarinen and his son Eero Saarinen, Richard Meier, and Robert Venturi, among others. So a city in the heartland of fewer than 50,000 people would become a vessel of modernism’s legacy.

The burdens and blessings of our patrimony, both cultural and personal, are an overriding concern in the debut feature by Kogonada, a Nashville-based artist who has developed a following for his video essays and “supercuts” of canonical auteurs. Columbus lingers on the juxtaposition between the architectural masterpieces that bedeck the region and the pedestrian lives of its residents. One of those residents is the 19-year-old Casey (Haley Lu Richardson), now spending her summer—or is it the rest of her life?—back home with her mom. An architecture buff who works at the I.M. Pei–designed public library, she spends her days shelving books and passively flirting with another overqualified drone (Rory Culkin), and her nights hanging out with her mother (Michelle Forbes), a woman who juggles cleaning-lady shifts with a job at the local factory.

One day, while out for a smoke break, Casey meets Jin (John Cho), a translator from Seoul who is in town indefinitely to be with his ailing father—a famous architecture scholar, who has collapsed and entered a coma while visiting Columbus for a talk. Casey tells him she knows of his dad; indeed, she had been planning on attending the event. The two befriend each other over the course of Jin’s stay, walking and talking about the city’s buildings. Jin is guarded and ambivalent; Casey is a wide-eyed enthusiast. At first, she mimics the tour-guide spiels that we hear snippets of over the soundtrack as platoons of tourists march around the city. But chided by Jin, she sheds the rote observations for more personal ones. During one late-night jaunt, she confides that during a rough patch in her life involving her mom and meth, the buildings of her city, lit up and lonely at night, became a refuge from her worries.

Jin’s own history with his parent is less eventful—if no less unhappy. In exposition a bit too on the nose, Jin tells of a distant father with little interest in his son. Notably lacking Casey’s bubbly zeal for architecture, he nonetheless reveals his own deep feeling for the buildings. He reads his father’s books, attempts to decipher his notes, even cribs his observations. (“You just recently read about this building,” Casey jabs when he admits he lifted an acute insight from a book he read earlier that day.) Walking inside Eero Saarinen’s North Christian Church, a hexagon punctuated by an audacious spire, monumental amid a serene green, Jin even apes his father. He wanted “modernism with a soul,” he says with a thick Korean accent, a half-mocking, half-affectionate impression that reads as an acknowledgment of a birthright.

Columbus was dreamt up by Kogonada after a day trip to the city with his family. “There was an undeniable poignancy to it all,” he muses in a Q&A in the press notes, “this quiet town in the conservative Midwest functioning as a living (and ghostly) museum to the promise of modernism.” This is very much the Midwest of the present—every mother seems to be a cleaning lady or factory worker, and the young millennials work service jobs while vying for internships in dying industries (Casey applies at the Columbus Republic). That vivid snapshot of the American precariat offers a bracing contrast with the utopian ideals that modernism’s works embody. One of Kogonada’s most indelible images is straight out of Tati (himself the creator of one of the great skewerings of modernism): a crew of cleaners in matching smocks vacuuming and dusting after hours, seen through the sleek glass facade of Myron Goldsmith’s Republic office building.

Kogonada hardly wastes an opportunity to foreground the city’s jewels. Columbus opens with the cool interiors of the Eero Saarinen’s Miller House, all straight lines, shiny planes, and bursts of color; other structures—Eliel Saarinen’s First Christian Church; Pei’s library, right across the street; Eero Saarinen’s Irwin Union Bank and Trust—get their own arias. The deliberate framing by Kogonada and cinematographer Elisha Christian emphasizes the interplay of space, structure, and the human form. People pose against the buildings, amble through their interiors, stare up at facades. Sensitive to the way we move in and relate to our environment, Columbus evokes a modernism its practitioners intended—an architecture that may be imposing and grounded in the theoretical, but is ultimately inextricable from a community’s life.

Indeed, for all the modernist monuments on display, Columbus is remarkably attuned to interiors. The shots of memorable buildings are impeccably framed, but one of its most affecting images is an empty hall inside Casey’s house, a piercing snapshot of domesticity that evokes Ozu, one of the director’s lodestars (indeed, the pseudonym Kogonada is reportedly a play on Kogo Noda, Ozu’s screenwriter). In its attention to the spaces people actually live in (and leave behind), Columbus transcends the travelogue shallowness its premise hinted at.

Set in a Midwest that progress has passed by, Columbus could’ve landed some cheap shots about modernism’s failure and called it a day. But for all the unfulfilled promise that hangs in the air, the movie closes with a hopeful turn. At its heart is the days-long conversation between Casey and Jin. Whether or not their insights about art are smart or novel is beside the point; the very act of talking about art, earnestly and without embarrassment, is invigorating. It helps that the movie’s anchoring performance is a knockout: Richardson, who appeared in last year’s The Edge of Seventeen, is a soulful and wry presence, her Casey an unassuming nerd alive to visual ideas—and not because they’re mere opportunities for an Instagram post. (She doesn’t even own a smartphone, a trait reminiscent of Adam Driver’s poet in Paterson—a kindred spirit.) In depicting their friendship as the product of an intellectual exchange, Columbus makes a disarming case for the promise of art as a conduit for human connection.

A little too studied in its smallness, Columbus can be burdened by the mannerisms of American independent cinema. Its beats are familiar, its arc is unsurprising. The should-I-stay-or-should-I-go plots, set on parallel tracks—one with mother/daughter, the other father/son—are little more than serviceable scaffolding for the movie’s more engrossing musings on art and communion. And some unexpected moves—Kogonada plays with sound in a couple of scenes, for instance—don’t quite work, welcome though the spirit of experimentation might be.

But if Kogonada is still finding his voice as a feature director, there’s a core of intelligence and sensitivity that distinguishes his movie. In its attempt to shine a light on neglected places, American indie regionalism can sometimes produce the opposite of its intended effect, offering instead a gawking tourist’s eye, flyover porn for coastal audiences. That’s not the case with Columbus. There’s a self-awareness here matched by modesty: those shots of tour groups walking by offer not just a sense of place but also a nod to a common criticism of American regionalism—I know I’m a tourist here too, the filmmaker seems to say. He treads respectfully, listens, watches. It’s a thoughtful disposition that’s too rare in movies.