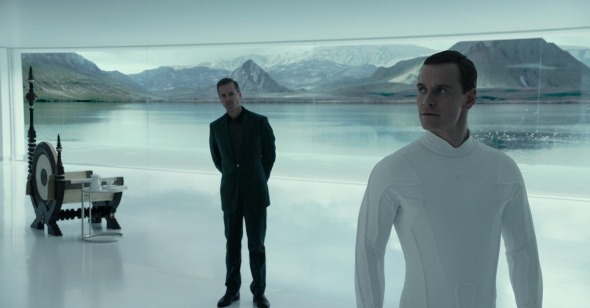 History repeats itself, as do artists. But the level of self-reference (some might say self-cannibalization) in Alien: Covenant, Dame Ridley Scott's second prequel in the long-running Alien series after 2012's woeful Prometheus, is off the charts.There are innumerable visual and thematic allusions here to Scott’s masterful 1979 sci-fi/horror hybrid Alien, which begat sequels and offshoots helmed by James Cameron, David Fincher, Jean-Pierre Jeunet, and Paul W.S. Anderson. Covenant begins, however, by cribbing from one of its director's only other good films, 1982's Blade Runner.

First image: an eyeball fills the screen, its surroundings mirrored in the translucent cornea. In Blade Runner, the reflection was of a futuristic city on fire. Here it is of a soundproofed white room, which turns out to be the home base of Peter Weyland (Guy Pearce), the obsessive gazillionaire behind all of the Alien series' ill-fated space missions. That big blue oculus, meanwhile, belongs to the android David (Michael Fassbender), who was torn to shreds, though not completely destroyed, in Prometheus. This is a flashback to the moment of his activation, and the mood is intriguingly portentous. The freshly birthed cyborg identifies several of the Renaissance-era artworks (Michelangelo’s David, of course, among them) owned by his creator. He plays a flawless piano rendition of Richard Wagner's "Entrance of the Gods into Valhalla" from Das Rheingold. And he finally transitions from infant-like curiosity to monomaniacal smugness when he realizes that, unlike the clearly aged and ill Weyland, he—being more machine than man—is effectively immortal.

A tried-and-true theme to be sure, but one that, in this context, still resonates, in large part because of the alarming speed with which Fassbender goes from a receptive blank to a holier-than-thou prig. Inquisitiveness is supplanted by sociopathy. Who needs slimy extra-terrestrials for scares when the human condition, as epitomized in an egoistic automaton, is plenty? But that title, speaking of covenants, promises its hungrily nostalgic viewership an Alien movie. And so those otherworldly creatures eventually have to take center stage.

Yet did the execution have to be so rote? Prologue aside, Covenant's lengthy first section is a near beat-by-beat remake of the first Alien, just with a larger cast and a more tiresomely languid approach. The film’s title refers not only to its central thesis—the oft-destructive pacts made between gods (or those who fancy themselves such) and monsters—but also to the spaceship carrying a group of colonists to a far-off world. Each shipmate is romantically paired with another, but there's little distinctiveness to the hetero, homo, and interracial couples, either as partners or as individuals.The sick joke, really, is that everyone is meat, if not to the Martian menace then to the cruel vagaries of fate concocted by Scott and his credited screenwriters, John Logan and Dante Harper.

Admittedly, one of these callous narrative twists is quite pleasurable: though he's later briefly seen and heard in a crewmember's home movie, ship's captain Branson, played by multi-hyphenate dilettante James Franco, is burned to death before he says a single line of dialogue (all subsequent Franco-featuring films are encouraged to follow this lead). It's clear Scott intends this turn of events, which is basically the result of some bad space weather, to be tragic. Instead, it comes off as both unintentionally laughable and cynically calculating, since it's a sloppy means to endear us to Branson's better half—and Covenant's anemic Ellen Ripley stand-in—Daniels (Katherine Waterston).

It's unfair to say that Waterston, who has been directed to play her character with a monotonous, irritating petulance, is no Sigourney Weaver, because almost none of the performers make any kind of impression comparable to the original Alien's extraordinary ensemble. This is especially vexing in the case of talented folk like Billy Crudup (as the ship's devout, yet weak-willed backup captain), Danny McBride (cast somewhat humorously against type as a moody, cowboy-hat-wearing navigator), and Amy Seimetz (the extremely gifted co-creator of and co-performer in Starz's The Girlfriend Experience, here reduced to playing a one-note hysteric), who all brood about, waiting their turn to square off with facehugger or xenomorph.

Ah yes, those ravenous E.T.s. They start appearing once the Covenant crew lands on a mysterious planet (not their originally intended destination) with an Earth-like atmosphere. And they, too, are an afterthought, the expected attractions in a three-ring circus long beyond its glory days. It's become a cliché to say that digital effects lack the weight of their analog forbears (prosthetics, men-in-suits, etc.), but when the stereotype holds it holds, and these toothy monstrosities are for the most part digitally augmented desecrations of H.R. Giger's memorably phallocentric original alien, bursting out of spines and leaping through the air with such blurry, gravity-defying speed that they seem to inhabit an entirely different space from their human prey. Suspense and terror are blunted. Even a new creature, a faceless freak known as a neomorph—birthed from a dandelion-like fuzz that embeds itself in an unlucky host's nasal or ear canal—barely gets the adrenaline flowing.

We’ve seen all this before, and like many pop-cultural touchstones revisited decades later, there's rarely a sense that the creators are truly expanding on what’s already been done. Instead, Covenant is about filling in trivial minutiae: Prometheus revealed the origins of the "Space Jockey," that giant mummified corpse (one of the master race known as The Engineers) discovered by poor, doomed John Hurt in the original Alien. This new film, meanwhile, explains the beginnings of the facehuggers, the spiderlike parasites that plant xenomorph eggs in their victims' chests with gooey, gory results. And Mads Mikkelsen built a flaw into the Death Star (oops, sorry, wrong franchise).

Our contemporary culture's need to resolve the dangling narrative threads of popular works of art is truly a pox. If everything is spelled out, then there's no room left for mystery and imagination. It’s always better to allow the mind to race just enough so that it deepens the things that we see and hear. Covenant, with one exception, sheds so much light on what's come before, and augurs so much of what's to follow (remember that Dame Ridley intends for one-to-three more films after this, leading up to the original Alien), that the overall experience is flat and lifeless—basically a big-budget, blood-and-guts rendition of Connect the Dots.

Amidst all the warmed-over space operatics, however, there is a mad scientist subplot that actually has some B-movie giddiness. It basically pits Fassbender against Fassbender: not only does this magnetic performer play the fey, artistically inclined David (who survived his Prometheus travails and is now dabbling in some alien creationism), he also portrays the Covenant's resident mecha-man, Walter, an upgraded model that speaks in the comically macho tones of a dim-witted frat boy who fears all dicks except his own.

Among his many flaws, Scott's never been an especially sensitive or intuitive filmmaker when it comes to gender and sexuality. The feminist slant of Alien, as in later Scott joints like Thelma & Louise and G.I. Jane, increasingly seems like a byproduct of good casting and the gray-shaded influences of other collaborators—in Alien's case, scriptwriter Dan O'Bannon and producers, ahem, David Giler and Walter Hill. So every scene in which femme-Fass faces off with bro-Fass (their tête-à-têtes are the film's finest special effect) comes with a heaping helping of homophobic cringe. "I'll do the fingering," says David in a key sequence in which he teaches his second-gen identical to play the piccolo. The way the camera tracks around the two hominoids as they do their suck-and-blow music routine is so clinical and anti-erotic that you can practically feel Scott recoiling in ass-covering horror. His brother Tony's shameless, superficial Bruce Weber referencing in Top Gun seems progressive by comparison.

Fortunately, Fassbender is no such prude. He's one of the most giving actors currently working, especially when it comes to playing on and off of his physical attractiveness. (See, for a comparably stellar example, his devil-in-the-flesh music producer in Terrence Malick's recent Song to Song.) Fassbender embraces the surface traits of both these human simulacrums—David's slight lisp and blond-flecked pompadour, Walter's aggressive glare and vaguely ape-like lope—then allows the emotional complications to slowly, subtly emerge as their interactions become more and more discordant. Each can destroy the other. Or perhaps they can become one. This story thread alone, however muddied by several masters, makes Alien: Covenant worth a watch. While everyone else is being ripped apart by digi-beasts from beyond, David and Walter play out a mechanized, homoerotic puppet show that culminates, brutally and provocatively, in A.I.-shepherded genocide. Aliens eat man, android inherits the earth.