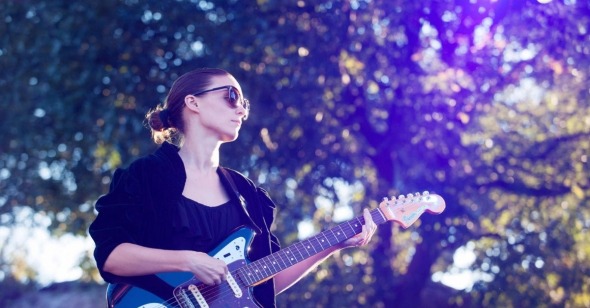 Songs in the Key of Life
by Jeff Reichert

What happens if you get there and there isn’t all you’d hoped? Is it different than what you’d expected? What did you do along the way? Do you have regrets? How do you assess all the choices leading up to your arrival? What would you change? What did you miss? How does one find fulfillment—spiritual, creative, or romantic? Are those things different?

Faye, the protagonist of Terrence Malick’s new film, Song to Song, wrestles with variations of all of these questions over the course of the few years we spend with her. She’s an Austin-based aspiring musician who dreams of success, though she is only seen holding an instrument in a few shots in the film, and then regards it warily, like a live snake hung from her neck on a strap. Faye is played by Rooney Mara, and as Song to Song begins, she is enmeshed in an unhealthy, sexual relationship with the rich successful music producer Cook (a lupine Michael Fassbender, ceding rakish charm here for lasciviousness), whom she believes will help advance her career. She meets another aspiring musician at one of Cook’s parties, BV (Ryan Gosling), cleaner, hunkier, and talented, and begins romancing him. Cook, unaware of their new relationship at first, suggests he and BV make a record together. Faye keeps her past dalliances with Cook a secret from BV as the three grow more involved with one another.

This central secret is a kind of narrative driver for Song to Song inasmuch as one could say it is a film directly concerned with narrative aims. As with To the Wonder and Knight of Cups, Song to Song is a film that fragments story to focus on the sensation of moments, and it pushes Malick’s recent attempts to dispense with the traditional movements of narrative filmmaking—the predictable beats, rises and falls in action, character development—in favor of something more symphonic and associative, further than he’s gone before. Rare in Song to Song is a “scene” in the traditional sense. Interactions between characters begin and end in medias res, or are broken up by imagery from other times and places inserted at odd angles. In Malick’s language, frenetic shots of concert crowds reveling madly might be used as visual punctuation and underscoring for an argument between two lovers on the verge of separating. A shot skimming quickly over tranquil waters might stand in for comfort in new love. No moment is allowed to linger as long as, say, that sequence early in To the Wonder when Neil, Marina, and Tatiana cavort in the park, or those scenes of Rick and Barry roughhousing in Knight of Cups.

Yet, even as his free associative play with imagery has grown more radical and less connected to linear storytelling, Malick is still creating works that transmit astonishing amounts of narrative information. Song to Song not only manages to detail the present-day struggles of its four main protagonists (the three aforementioned, plus Natalie Portman’s Rhonda, a waitress romanced and then later co-opted by Cook) but hints at their pasts, makes room for their parents (Holly Hunter hits especially hard in her few brief scenes as Rhonda’s mother), includes several other peripheral lovers of both BV and Faye and cameos from musicians like Patti Smith and Iggy Pop. At this point, Malick is now assembling his films in the edit from reams of footage shot on the fly in a highly improvisatory fashion, yet what’s most remarkable is that his choices remain incredibly precise. How could we learn so much about these characters in the midst of such a visually overstuffed film if not for the fact that Malick has firmly mastered the dark arts of narrative? His control has allowed him to whittle his films down to bare essentials. He’s learned exactly which moments he needs. The central triangle of Song to Song holds echoes of the passions at the core of Days of Heaven, but Malick’s means of communicating them have evolved.

“Stuffed” is not an inapt word for describing Song to Song, for as much as it is a film overflowing with sights and sounds, it also seems crammed into the nooks of Austin as Malick was observing it. Thus characters are witnessed at concerts, back- or on-stage, playing out their private, created dramas while, behind them, audience members enjoy spectacles staged for different ends. A trip that the three lovers take to Mexico finds them interacting with locals who seem joyous before the camera. Later, a woman talks to Faye and Cook about her life as a prostitute in the bleary day-lit aftermath of yet another of the outlandish sexual adventures into which Cook draws his paramours, and whether she’s a professional actor or not the feel of her testimony seems to bear the weight of lived experience. This near-documentary filmmaking mode was hinted atin Ben Affleck’s visitations with local townsfolk to investigate environmental damage to their town in To the Wonder, and in the shards of actual Los Angeles life piercing Knight of Cups, but Austin and its ballyhooed music scene is a regular, active presence in Song to Song, and a key reminder that, for all of their surface similarities, each of Malick’s three recent features functions differently.

What does a 73-year-old recluse have to say about the power of music in the streaming age, one might wonder? Apparently quite a bit. He often cuts back to ultra-wide views of audience members thrashing and cavorting, sometimes dancelike, in slow-motion, at others furiously moshing in regular speed. The first such instance of this is accompanied by the wind up of an EDM tune, and as you wait for the bass to drop over the revelry, it’s clear that Malick has as much facility with this modern music as he does with Wagner and Mahler. (It’s a sequence that wouldn’t have felt out of place in Michal Marczak’s All These Sleepless Nights.) Song to Song is wall-to-wall with music, whether it’s doo-wop, EDM, rock ’n’ roll, classical, or African hymns, and sometimes just sounds of wind and crickets, often blended gently together. When Faye says early in the film, “We thought we could live song to song, kiss to kiss,” she’s revealed not only her romantic twenty-something yearnings, but also her movie’s artistic manifesto. Malick’s polyphonic approach suggests then, when applied to music, style and genre are potentially limiting factors.

Song to Song seems resistant to common evaluations of onscreen acting, also not unlike To the Wonder and Knight of Cups, whose ostensible protagonists exist as voids. Yet one could argue that any Malick film offers the talented actor an immense potential to hold the screen, if they discover the right position, glance, expression for just a moment. (And if they’re not left on the cutting room floor.) Emmanuel Lubezki’s camera gives Song to Song's most overt virtuosic performance, and the editing isn’t far behind, yet Mara conveys much simply and often without words. Though she shares the soundtrack with voiceover from several other characters, her on-screen performance makes this her movie. Mara’s lover from Carol, Cate Blanchett, similarly dominates her few scenes as BV’s older, rich lover. Fassbender is fine in full-on predator mode; Gosling proves again that his leading man status has been conferred, not earned; Portman remains as inexpressive as ever.

Song to Song’s darkest movement finds BV adrift after the revelation of Faye’s deceptions, Faye lurching back into strange sexual power games with Cook, and Cook’s new bride Rhonda’s perhaps accidental death by drug overdose. At another point, BV and Cook fall out over copyrights of recordings, in a scene that feels only vaguely thought through. And Malick, so gracious to so many of his characters throughout his career, offers Cook the possibility of redemption in marriage to Rhonda but then cruelly yanks it away. This turn occupies a lengthy stretch in the film’s back half and feels somehow inorganic—as if Malick had succumbed to the expectations of narrative that he’d fought so thoroughly against. These sequences aren’t any less fractured, but the film's edifice, built on the clear-eyed selection of crystalline moments cannot bear it.

What happens when audiences have come to expect long-simmering, historically engaged Gesamtkunstwerks from a filmmaker and then are treated rapid-fire to a series of increasingly ungraspable present-day love stories? What is Malick doing in To the Wonder, Knight of Cups, and Song to Song, and why now? These are questions we will likely better answer in years to come, after more Malick films arrive and confirm suspicions, deny expectations, or suggest wholly new groupings and tantalizing connections. My hunch is that, after his first series of period-set films were completed, and he’d made his ultimate grand statement with The Tree of Life, emboldened by new technologies for realizing his aesthetic aims, Malick’s been slowly revealing himself to his audiences in these films, teasing out bits of his biography (a love affair with a European woman, time spent drifting as a screenwriter in Los Angeles, and his current creative reinvigoration in Austin). He’s inviting us in as he remakes himself as a filmmaker, even making an unthinkable public appearance at SXSW to unpack his art. There was a time, not terribly long ago, when the idea of a new Malick movie seemed unlikely at best, and each new one felt like it could have been the last we’d ever get. How then, do we best adjust to the reality of Terrence Malick, working artist? We watch. We listen. We follow along as he plays us each new entry in his songbook.