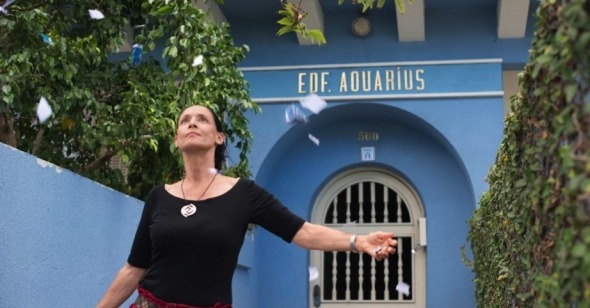 The State of Things
by Jeff Reichert

With only two features to his name, it’s perhaps early to classify the career of Kleber Mendonça Filho. Yet if pressed for an assessment of his core concerns and themes based solely on his debut, Neighboring Sounds and, now, Aquarius, we could say he’s a filmmaker interested in real estate anxiety. Neighboring Sounds was a drifting, ambient, multi-character sprawl that tracked the changes—for better and worse—in the mood and psychology of a bourgeois apartment complex as the tenants implement new security protocols in the face of demographic changes. In Aquarius, a woman in her sixties faces threats (some real, some perhaps imagined) to her continued existence in the titular three-story beachfront apartment building she’s lived in for decades and which developers hope to raze and replace with a lucrative high rise project. Both films are set in Mendonça Filho’s hometown of Recife, a Northeastern coastal city first founded by the Dutch, and now Brazil’s sixth-largest metro area.

Aquarius opens with a splash of cognitive dissonance: we see a series of black-and-white postcards of Recife’s beaches and harbor while oft-censored leftist singer Taiguara’s 1969 ballad “Hoje” (meaning: today) swells on the soundtrack. The song continues over the first moving images, of that same beach but at night. And a title card announces it’s now 1980. Two different todays have been touched by “Hoje” and they won’t be the last. Neither will the intriguing disconnects between image and sound, past and present, that Mendonça Filho conjures here.

This section, an extended prologue entitled “Part 1: Clara’s Hair,” shot in the golden tones of cinematic memory, introduces us to Aquarius’s protagonist, played here by Bárbara Colen. Here we get a strong sense of Clara’s vivaciousness and charm, we learn a little about her family, and first see the apartment that becomes so central to her life; there’s so much in this scene that contains significance that it’s impossible to immediately glean it all (in the case of some details, it might require a second viewing). Thus Clara’s hair, cropped quite close, looks at first like an à la mod style choice, until later that night her husband Adalberto testifies to the challenges of her recent bout with cancer. In another example, as Clara joyrides on the beach with friends, she knowingly whips out a cassette of Queen’s just released “The Game” and pops it into the player cued up to track three, “Another Ones Bites the Dust”—it’s not until later in the film that we learn Clara spent most of her life as a noted local music critic. These friends (including her brother and future sister-in-law) grooving along to Queen’s stomp were likely used to Clara taking command of the stereo. But we can’t know this yet.

Strategies of revealing and withholding are crucial to Mendonça Filho’s project, but this doesn’t scan as coyness or stinginess. Instead, he seems like a filmmaker who sees layers in all things, the vast multiplicities that can inhabit a single place and moment. This expansive view is given something like an aesthetic manifesto in the first chapter when Clara and friends return home, revealing for the first time the pastel pink Aquarius apartment complex in which she lives, to a celebration for her Aunt Lucia’s 70th birthday in full swing. As Clara’s son, and Lucia’s grand-nephew, offers a stuterring, droning toast to his beloved Auntie, Lucia’s eyes drift right, cuing the camera to follow her gaze over to an unassuming wooden credenza. A sharp cut reveals what’s on Lucia’s mind: a moment, decades prior, when she and a partner had vigorous sex on that same credenza. Time and space have collapsed again.

The party climaxes with Gilberto Gil on the record player, his Tropicalia “Toda menina baiana” echoing over dissolves that move us from 1980 to the same apartment today, where Clara still lives. She’s now in her sixties, played by Sonia Braga; several of the first shots we see of her emphasize the physical presence of her hair, now long and thick, likely grown back quickly after her cancer and kept that way ever since. The apartment and Clara have outwardly changed, yet it’s still those same walls, still that same indefatigable woman, grown into more than passing resemblance with Aunt Lucia. And some other things haven’t changed all that much: a sly downward pan of the camera as Clara exits for the beach reveals that the credenza remains. You might wonder in passing if Clara knows its full history. Likely not. It’s never spoken of, a secret we share with the movie.

Clara, now retired, is the last inhabitant of the entire Aquarius complex. Adalberto is nowhere in sight, and Mendonça Filho leaves it to us to wonder where he’s gone. The narrative focus in this present day section is the increasingly vile attempted strong-arming of Clara by the development company that owns the building to get her to leave. This begins with attempts at bargaining, and intensifies into ever more scandalous forms of coercion. Twenty-something Diego (Humberto Carrão), the engineer for the planned new development, presents himself first as a smiling voice of reason, but frustrated by his inability to break through to Clara is soon allowing raucous parties in the building. One morning when she leaves her apartment, she finds feces scraped across the stairs. Later a religious group deep in prayer blocks her entry.

In an act of will and war, the indomitable Clara hires men to repaint the fading building facade a cornflower blue. She wants nothing more than to remain in her apartment amongst her racks of vinyl, artworks, and decades of memories. As the film progresses, Mendonça Filho’s attentiveness to her possessions allows us to grow quite familiar with the former two, and Braga’s performance suggests all we need to know of the weight and import for her of the latter. Yet as much as we might root for Clara, Mendonça Filho never lets us forget a naggingly complicated class dimension to this story: it seems that all the other families in the building were bought out, but can’t receive their payments until Clara vacates. Similarly, the development complex keeps a host of workmen on call to demolish and rebuild, but can’t hire them in full until she’s gone. Are one woman’s principles enough of a reason to hinder the economic necessities of so many others?

By the end, it’s clear where Mendonça Filho’s sympathies ultimately lie. He’s spoken in interviews of his disgust at the erasure of old Recife in favor of the new, and as in Jarmusch’s Only Lovers Left Alive, he sides with the aging, the tactile, the dusty, the analog: Queen’s “Fat Bottomed Girls” on vinyl over mp3. Aquarius also makes clear his admiration of Braga. Though his style tends toward artificial-feeling zooms, floating steadicam shots, and disjunctive edits that emphasize detail over coherent space, for most of this film, he cannot seem to look away from his actress. And why should he? There’s a productive tension in this interplay, between a filmmaker who naturally craves waft and drift, and actor giving a performance commanding enough to make sure he doesn’t wander too far.

Presiding over all this is Clara, no-nonsense and sensuous, her apartment, the record collection she reaches to often, the pleasure she seeks from friends, food, the beach, wine, her neighbors, and her grown children. For Mendonça Filho the skin of her tenuous reality may (or may not) be somewhat porous, rendered that way so that he can invite endless possibilities: more sensations and memories and suggestions and the synesthetic effects associated with all those. As a filmmaker, he’s interested in real estate, yes, but also with less tactile things, using sound, image, music, and editing to weave an accessible yet strangely ethereal narrative. When he brings “Hoje” back at the film’s rousing finale, it’s lost the nostalgic cast, and instead feels like a mission statement and narrative summation: “Today / I bring in my body the marks of my time / My despair, a life in a moment / The pit, the hunger, a flower, the end of the world."