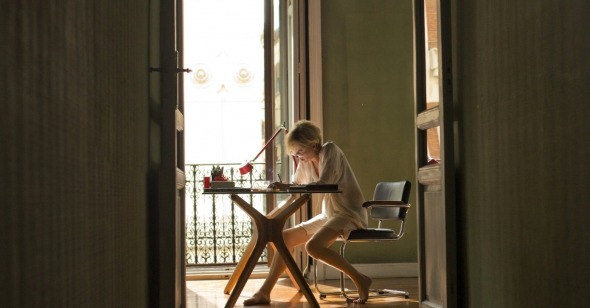 When Pedro Almod√≥var initially conceived his twentieth feature film, Julieta, he wanted Meryl Streep to play the title role at three different stages in her life‚Äî20, 40, 60. Almod√≥var eventually decided to return to Spain and shoot in his native tongue, fearful of filming outside his geographical and linguistic comfort zone. Had the collaboration materialized, perhaps it would‚Äôve served as a much-needed jolt of energy for two great artists who‚Äôve plateaued in recent years. Indeed, the standard complaint about this chapter of Almod√≥var‚Äôs career recalls what is sometimes said of Streep: he appears to have grown risk-averse, following both critical and popular acceptance, and his films have become more tame and genteel as a casualty.

The common critical refrain with Almod√≥var is that he‚Äôs two different filmmakers. At times, he is the madcap lunatic with broad comic leanings. At others, he is the man who unspools the interior lives of women through melodrama like so many of cinema‚Äôs estrogen obsessives before him, like Cukor, Sirk, and Fassbinder. On occasion, these two competing strands reconcile, as they did in All About My Mother. Yet his output in the decade since 2006‚Äôs Volver, from Broken Embraces to The Skin I Live In to I‚Äôm So Excited, has lacked the charge and spontaneity of his finest work. Julieta has awoken him from this recent stupor.

Like All About My Mother, Julieta is about a bereaved mother, and she is played by two women at separate stages in her life: in her forties by Emma Su√°rez, and then in her twenties by Adriana Ugarte. We first meet Julieta when she has grown private and forlorn. Julieta hasn‚Äôt seen her daughter, Ant√≠a (Priscilla Delgado as an adolescent, Blanca Par√©s when she is older), in twelve years, and she has spent those intervening years battling depression. Just as she is about to move to Portugal from Spain with her lover, Lorenzo (Dar√≠o Grandinetti), she, by chance, runs into Bea (Michelle Jenner), a childhood friend of Ant√≠a. Bea alerts Julieta that Ant√≠a is now living in Lake Como with her three kids, a revelation that sends Julieta into an emotional tailspin. Julieta then abandons her initial plans to go to Portugal and moves back into the building where she raised Ant√≠a, and begins to revisit the time of Ant√≠a's conception. She spends the film sifting through the drudgery of her past to make sense of her mistakes.

We flash back to 1989, when Julieta is on an overnight train. Here she is played by Ugarte, spiky-haired and costumed like a Jem and the Holograms character, blue fisherman‚Äôs turtleneck, and large red earrings to boot. Ugarte‚Äôs Julieta seems like an entirely different woman from Su√°rez‚Äôs‚Äîmore impulsive, unbridled, passionate. She is entertaining the portentous musings of her older male train-mate, and she grows bored with him, misconstruing his cries for help as sexual advances. Spooked, she leaves the shared seating compartment and goes to the dining car, where she meets an impossibly handsome Galician fisherman, Xoan (Daniel Grao), whose wife has been comatose for years.

The journey is marred by a tragedy for which Julieta can‚Äôt help but assume a modicum of responsibility‚Äîthe train shrieks to a halt; the man whom Julieta just walked out on committed suicide by jumping off the train. To ease her sadness, Xoan and Julieta have sex on the train, and this chance encounter begets a daughter, Ant√≠a. After Xoan‚Äôs wife dies, Julieta and Xoan marry, yet the guilt of this episode forecasts greater tragedy that rears its head later in their marriage, culminating with Ant√≠a abandoning her mother upon reaching adulthood.

As in Volver, another Almod√≥var film predicated on the estrangement between mother and daughter, Julieta‚Äôs narrative is labyrinthine, riddled with eleventh-hour twists that recast earlier events in a more urgent light. Such revelations give earlier throwaway gestures greater weight and meaning. In fact, the film is a collage of plot points that stay constant throughout Almod√≥var‚Äôs career‚Äîa mother searching for her child (All About My Mother), the fraught mother-daughter relationship interrupted by abandonment (Volver), even a comatose wife (Talk to Her)‚Äîbut there is less emotional excess here than in any of those films, even the comparatively austere Talk to Her. This signals something of a shift for Almod√≥var. ‚ÄúI battled a lot with the actresses‚Äô tears, against the physical need to cry,‚Äù Almod√≥var told El Pa√≠s in March. ‚ÄúWhat I wanted was dejection‚Äîthe thing that stays inside after years and years of pain.‚Äù

Almod√≥var‚Äôs sobriety here befits his unlikely source material‚Äîa trio of short stories from Canadian writer Alice Munro‚Äôs Runaway. At first glance, the two artists possess discordant sensibilities, with Munro‚Äôs plaintive moodiness a seeming mismatch for Almod√≥var‚Äôs lunacy (Sarah Polley‚Äôs Away from Her, also adapted from a Munro, offers quite a different interpretation). Almod√≥var‚Äôs latest films have felt wanting for this very reason‚Äîthough I‚Äôm So Excited was an aberration, he‚Äôs largely mellowed the eccentricities that once endeared audiences to him.

And yet the film has more rhythm than anything else he‚Äôs done in the past decade, and its successes lie primarily in the way he structures the film as a two-hander between his actresses. Critics often speak of Almod√≥var‚Äôs fascination with women, but these so-called women‚Äôs pictures tend to gravitate around certain muses‚ÄîCarmen Maura, Victoria Abril, Marisa Paredes, Pen√©lope Cruz. His most recent with Cruz, Broken Embraces, felt rote, as if their collaboration had exhausted its potential. Almod√≥var has worked with neither Su√°rez nor Ugarte before, and for this reason the film feels fresh, as if Almod√≥var is working in an unfamiliar register. They are two very different performers, a fact that becomes increasingly evident by Almod√≥var‚Äôs characteristic extreme close-ups. Ugarte has large, milk-saucer eyes that communicate alertness, while Su√°rez appears sullen from the minute we meet her.

Ugarte is particularly skillful in suggesting that the Julieta we meet on that train will, one day, become the withdrawn Su√°rez. As the film goes on, Ugarte‚Äôs body language becomes bulkier as she dissolves into near catatonia. This culminates in a scene, already justly celebrated, wherein Ant√≠a is rubbing her mother‚Äôs hair clean after a bath. Ugarte‚Äôs head disappears underneath that towel, and Su√°rez's face emerges as a total shell of the vibrant, youthful woman we‚Äôd known before. The sequence is balletic. Ugarte had already externalized Julieta‚Äôs trauma so adeptly that the transition between the two performers is seamless.

It is through these two women, and the way he directs them, that Almod√≥var realizes what he terms a ‚Äúcinema of women‚Äù that is more fine-tuned than his previous films. The closest he‚Äôs come to this previously was in Cecilia Roth‚Äôs work in All About My Mother, a performance devoid of histrionics even as chaos swarmed around her. She was a quiet center of gravity, and the film derived much of its power by having Roth as its anchor‚Äîa mother pining for her child, a feeling of loss that Julieta builds on.

The anecdote about Streep would no doubt support the popular thesis that Almod√≥var, almost 67, has aged into a filmmaker of compromise, as if the once fearless director is now paralyzed by fear of broadening his horizons. With Julieta, though, he works off a grand canvas without sacrificing intimacy or insight. To speak of this film as a slight entry in Almod√≥var‚Äôs filmography would betray his genius; he is the rare filmmaker who can explicate upon a woman‚Äôs grief without exploiting it. In Julieta, Almodovar toys with this thematic occupation, but he does so with unfamiliar faces. And Ugarte and Su√°rez have coaxed a more observant filmmaker out of him, giving his filmmaking a needed jolt of energy.