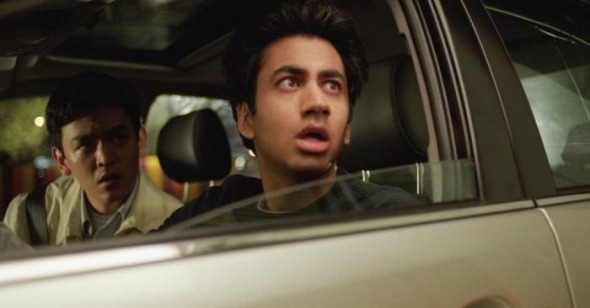 ‚ÄúThe American Problem,‚Äù so-called, has undeniably been the Cannes-defining cog around which the hot-button cinema of the past two-plus years has rotated. And as every imaginable genre and director lines up to encapsulate the state of the nation for every imaginable demographic, I suppose it was only a matter of time until the minds behind Dude, Where‚Äôs My Car? fumbled their fingers onto the pulse of our troubled superpower. And so witness Harold & Kumar Go to White Castle. Striving for heights of feature-film commercial whoring not seen since the 100-minute Super Mario Brothers 3 advert that was 1989‚Äôs The Wizard, Harold & Kumar expands product placement into the film‚Äôs central crucible; the quotidian mission of the title/synopsis becomes a metaphorical quest for the fulfillment of the American dream. ‚ÄúThis is about achieving what our parents set out for,‚Äù Indian-American Kumar (Kal Penn) tells his friend, Korean-American investment banker Harold (John Cho). To the movie‚Äôs credit, it forms a logical basis for such a claim; in the context of Harold & Kumar, America is indivisible from shitfaced late-night runs for lousy 24-hour fast food. And this, it beams, is by no means a bad thing.

Our protagonists, polar-opposite roommates who relate over the weighty expectations of their immigrant parents and a shared love of wacky tobaccy, are introduced in shorthand personality-illustrating skits. It‚Äôs Friday at quitting time and passive, shy Harold is buried in a heap of sloughed-off work by his slacking cracker co-workers (‚ÄúThose Asian guys love crunching numbers‚Äù). Drifting-but-gifted Kumar shows up in a med-school entrance interview with the Dean (the omnipresent Fred Willard), which he intentionally and flamboyant flubs. Sensitive, over-reliable Harold fawns from afar after Maria, the gorgeous girl down the hall (Paula Garc√©s), and harbors a fondness for John Hughes movies; he gushingly calls Sixteen Candles ‚Äúa beautiful love story,‚Äù though it‚Äôs unclear if he‚Äôs talking about the Long Duk Dong subplot. Smarmy Kumar expends the whole of his energy in avoiding the onset of adult responsibility, occasionally tossing Harold time-tested nuggets of free-wheeling best-bud wisdom like ‚ÄúYour whole life is pre-set,‚Äù all with a liberal dose of Dennis Miller smirk. The boys are both blessed with the sort of obvious, archetypal personalities that only seem to exist in movies geared at 18-25 year-olds (or in actual 18-25 year-olds) and, as such, both are just ripe for a life-altering road trip‚Ñ¢ to smooth out their extremes.

Cue the impetus: sitting stoned and ‚Äúhungry as balls‚Äù on their couch, the duo watch a White Castle commercial‚Äîslow-motion landslides of crinkle-cut fries and swaying heaps of burgers‚Äîthrough goggling, bloodshot eyes. The television's siren song of sliders sends our heroes out on the road, navigating the by-routes of New Jersey in the rapt thrall of Grade-D beef, a journey which expands to suburban Homeric proportions as it‚Äôs sabotaged by bad directions, weed, and sex pit-stops, rabid woodland creatures, car theft, self-doubt, and incarceration. Harold & Kumar takes place‚Äîsignificantly‚Äîa river away from the prohibitive rents and ritz of Manhattan, in a homely Garden State that combines the pre-fab environment of American sprawl with a diversity that‚Äôs distinctly NYC metro; this is the Jersey where stepping off a PATH train is like walking into a U.N. meeting. Harold and Kumar form their kinships here through the melting pot of pot, as with their building‚Äôs resident Jewish stoners (David Krumholtz and Eddie Kaye Thomas, doomed to vie for all eternity with Thomas Ian Nicholas for title of ‚Äúmost forgettable member of the American Pie cast‚Äù), or through implicit bonding over outsider status, as with a harassed convenience store owner or a wrongly-imprisoned black academic (who has two gay dads, to boot). The movie envisions inter-minority relations as a harmonious ethnic mash-up; witness Harold‚Äôs dreams of Maria, which combine the crazily lucid palette of Asian animation with the operatic iconography of a south-of-the-border western.

The obstacles to Harold and Kumar‚Äôs fast-food crusade, by contrast, are almost exclusively Caucasian; the race is represented as an bizarre, idiotic, and intimidating dominant enclave, epitomized in a pack of ‚Äúwhoo‚Äù-ing, tribal-tattooed extreme sports types (who have the movie‚Äôs funniest line: ‚ÄúLet‚Äôs get ourselves some fucking Mountain Dew.‚Äù) Other paper targets include a ‚Äúbusiness hippie‚Äù Princeton pot dealer who‚Äôs scooped out of jail by his blue-blood mother, replete with Bryn Mawr accent, a precinct-full of dumbly swaggering, moustache-packing, racist cops, and a gross-out detour into old, weird, Americana terrain, populated by a lumbering lunk of deformity named Freakshow (Christopher Meloni, replete with loving, lingering close-ups of pustules straight from ‚ÄúRen & Stimpy‚Äù) and his little peach of a swinger wife. The sole pseudo-exception to the movie‚Äôs Anglo-Saxon phobia is Neil Patrick Harris, appearing as himself, ecstasy-addled and abandoned, hitchhiking on a rural state route. Harris‚Äôs appearance depends very much on our memory of Doogie Howser, whose precocious prepubescent professionalism made him a likely role model for young, overachieving Pacific Rimmers. N.P.H. (as one patrolman affectionately calls the actor) steals Harold‚Äôs car and is spotted later swaying out of the sun-roof, piloting the vehicle no-hands, and huffing coke off of strippers‚Äô asses. Harris‚Äôs sweaty, peroxided satyr is something like the haywire mascot for the movie‚Äôs ethos, which blows off the burden of expectance on first-generation Americans. ‚ÄúProdigies of the world,‚Äù says Doogie, ‚ÄúParty your potential right the hell away.‚Äù

It‚Äôs true that the road to lenient reviews is paved with good intentions and, that said, it‚Äôs worth grimly noting how often the words ‚Äúsweet-spirited‚Äù have been amply applied to Harold & Kumar Go to White Castle. But I just can‚Äôt look past the movie‚Äôs scarcity of full-on laughs; so much of what makes or breaks these proudly puerile flicks is their ability to catch a stupid, silly groove that the audience can comfortably slump back into and ride. Despite an obligatory litany of bodily-function gags and sorry stoner surrealism, the film never hits that retardoid vibe. My litmus test for these things will always be the atmosphere I found in the packed house at a midnight, opening Friday screening of Scary Movie; the crowd seemed ready to levitate through sheer gaga, moronic bliss. But Harold & Kumar‚Äôs goofball attitude seems at best affected, as in the scene where the boys (oh, dear!) get an escaped cheetah high, and at worst hand-me-down, as in the ‚Äúhot girl overheard having violent diarrhea‚Äù vignette, lifted from the far-superior weed epic Detroit Rock City.

Harold & Kumar‚Äôs chief value isn‚Äôt comedic then, but it‚Äôs ability to function as a cinematic ambassador of international goodwill. The film champions a goofy multi-culti young America that‚Äôs all baggy cargo pants, raging hard-ons, and amiable ‚ÄúWhere‚Äôs the party?‚Äù attitude, certainly a welcome counterpoint to our current ‚ÄúIt‚Äù girl, Lynndie English. The movie fairly brims with love for the convenient modern USA of fast food, Home Depot, and multiplexes; early on the film seems to be laying up for an absurdist gag, riffing on the visual uniformity of our of contemporary landscape, preparing to put our heroes adrift in a confusion of identical landmarks. But then the set-up floats by unsprung, and I couldn‚Äôt help feeling a little guilty for even suspecting Harold & Kumar of that capacity for cynicism. Instead the bland, cultureless architecture of our off-ramp nation comes off as a neutral backdrop upon which any and all ethnicity is equally at home, and the bland, perforated patties of White Castle fare, quite sincerely, as a shining symbol of our national bounty.

So the movie inoffensively bobbles along between wacky scenarios, lubricated with wall-to-wall music; rock is only marginally present, limited to crappy pop-punk tunes that accompany the doofy hijinks of amok preppies. Harold & Kumar confirms hip-hop as the new musical esperanto, the universal, omni-ethnic language spoken by Jay-Z and Punjabi MC, but the movie‚Äôs most affecting musical moment is pure pop, as our protagonists let themselves lapse into a passionate car stereo sing-along of Wilson Phillips‚Äô ‚ÄúHold On‚Äù (‚ÄúDon‚Äôt you know things can change/ Thing‚Äôll go your way/ If you hold on for one more day‚Äù). Balancing irony, cheap generational nostalgia, Wayne‚Äôs World-biting, and an acknowledgement of how genuinely, transcendently powerful crap culture can be, this is where Harold & Kumar‚Äôs ambitions as a half-baked statement of the American zeitgeist almost come together, coming out in praise of the collectively unifying glue of bad pop.

All said, Harold & Kumar leaves unproven the question of stupid/wacky pot-and-potty humor‚Äôs capacity as vehicle for social commentary. But if the movie falls well short of Dreiser as a snapshot of America-as-it-is, it must at least be credited with exhibiting an understanding of this country that‚Äôs head-and-shoulders above the David Bowie ‚ÄúYoung Americans‚Äù montage at the end of Dogville. That, by contrast, is just plain stupid.