Neither Heaven Nor Earth 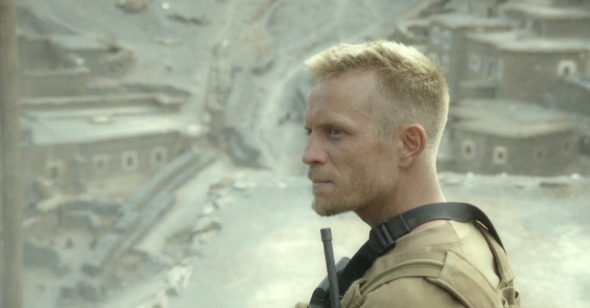 Gone but Not Forgotten
by Jeff Reichert

In Clément Cogitore’s Afghanistan conflict thriller Neither Heaven Nor Earth, something unexpected emerges from, and eventually overtakes, standard battlefield movie clichés. As might be expected, here, in the rugged, mountainous Wakhan Corridor of northeastern Afghanistan, war is hell for the men of the French battalion under the command of Capitaine Antarès Bonassieu (Jérémie Renier); this small group of soldiers is beset upon by Taliban enemies that seem to emerge from the ground itself and is entrusted with protecting the suspicious, recalcitrant village populace, who seem to like the French presence little better than the Islamic fundamentalists they’ve displaced. War is also a kind of tedium for these troops—many days seem to pass without event, and even skirmishes with their guerrilla enemies take on the feeling of routine drudgery. Drop to the ground, locate the enemy, return fire, repeat as necessary. Yet when members of Antarès’s troop start disappearing without a trace, writer-director Cogitore begins to suggest that war is also a space of mystery, perhaps even of the supernatural.

Two soldiers go missing after an evening spent on guard duty. Though their post was backed up and watched over by another group of soldiers across the valley, no one saw anybody coming or going. Earlier that same evening, a small group of villagers had held a bonfire on a nearby ridge, and set fire to a large object. We see this far-off event via the soldiers’ night vision and thermal imaging equipment, which turns human figures into ghostly grey shadows swimming in black, and the fire into an anxious splotch of burning white. Is there some connection between this seemingly ominous ritual and the loss of the two men? Antarès, who by all accounts seems a rational, respected leader of men, responds logically: new precautions are put in place, motion sensors, lights and barricades are installed and interrogation of the village elders begins. The reasonable assumption is that the disappeared soldiers were taken by their Taliban enemy, so these seem reasonable defense measures. It’s not until after a third soldier goes missing that reasonable responses start to seem feeble.

This third soldier vanishes in broad daylight. Two men are stationed in a small (now-fortified) guard post, and, as one exits the structure to relieve himself, Cogitore’s camera turns to follow. But when it turns back upon his re-entry, his partner is gone, seemingly evaporated. Antarès’s troops are further unsettled when emissaries from the local Taliban chapter request a meeting to negotiate the release of their lost fighters, assumed captured by the French. The revelation that both sides of the conflict are suffering from inexplicable disappearances renders the already strange landscape positively unreal.

The rocky terrain of Wakhan looks something like the moon in Cogitore’s vision, which leans less on grand vistas than tight, disorienting frames of men moving through space. It’s fitting as the Wakhan Corridor region of Afghanistan is a kind of nowhere—nestled between two mountain ranges, it’s a peninsula of land that touches Tajikistan to the North, Pakistan to the South, and China to the East. It’s home to a remote brand of Afghani tribalism (Kabul, when mentioned in the film, seems worlds away) and regional legends, one of which comes to hold sway over the increasingly frantic searchers.

After a local youth shares with Antarès a tale of spirits who live under the earth and collect anyone who has slept upon certain sacred grounds, the cool, rational leader of men met at the film’s outset grows unhinged: negotiating a cease-fire with the Taliban (which leads to their fighters meting out punishments on the villagers); teaming up with the Islamists in one of the film’s most darkly absurd sequences to dig holes into the ground in search of caverns (as in many films, war also creates strange bedfellows); posing as one of the lost soldiers in correspondence with the man’s pregnant wife and using himself as spirit-bait, firmly tethered and videotaped overnight. When he’s not taken, and his battalion’s departure date grows closer with no sign of the missing, Antarès finally has four sheep shorn and tied to posts in the ground in the epicenter of a coalition airstrike. The charred carcasses are stuffed into body bags so the families will at least have some remains to mourn. Antarès is punished by his superiors for putting his soldiers in the line of friendly fire. He accepts the rebuke stoically—he’s trying to fight an unknowable force, buthe’s still let his men, and their families down.

Most French troops left Afghanistan in 2012—at that point 81 French soldiers had been killed, second only to the U.S. Neither Heaven Nor Earth, set in 2014, seems to be documenting some of those left behind in that ever-vague “non-combat advisory” capacity so often reported by governments and news outlets. Removed from the immediate needs of political war films (which usually protest the policies that led troops to be deployed in the first place), Cogitore’s narrative is free to roam into mystically tinged directions. Yes, war is hellish and tedious and absurd. But perhaps the filmmaker’s not wrong to boldly suggest that within the fog of battle the miraculous and strange can commingle with the harsh realities of survival and death. One needn’t look further than his countryman Laurent Bécue-Renard’s documentary Of Men and War, which tracked U.S. Iraq war veterans suffering with PTSD over five years, for real-world confirmation of his intuition. All of those real, existing men live with the weight of an unlikely miracle: that they, and not the guy next to them, survived and returned home. For all we understand of the machinery of chance, it might as well have been spirits from the ground offering protection. Cogitore’s built this kind of unknowable force into the very fabric of Neither Heaven Nor Earth, and has given us a supernatural war film that’s unexpectedly true to life.