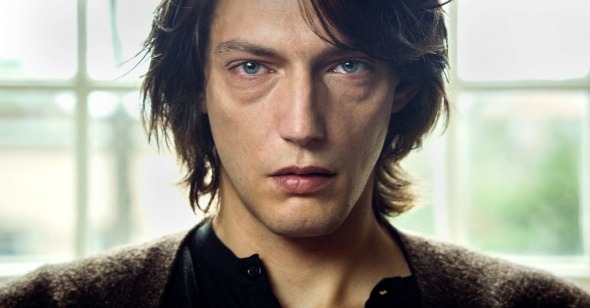 The Great Nothing
By Daniel Witkin

Andrzej Zulawski’s adaptation of Cosmos, the final novel by the great Polish modernist Witold Gombrowicz, begins with a young man (Jonathan Genet) getting distracted from forcefully reciting Dante in a forest by the sight of a dead sparrow hanging from a vine by its neck. This plunges our protagonist, also named Witold, into a frenzied investigation, at once absurdist veterinary whodunit, existential satire, and tormented referendum on the possibility of meaning in a universe of endlessly proliferating details. This is the “excess of reality” described by Gombrowicz towards the middle of his novel: “After so many objects that I couldn’t even begin to enumerate, after the needles, frogs, sparrows, stick, whiffletree, pen nib, leather, cardboard, et cetera, chimney, cork, scratch, drainpipe, hand, pellets, etc, etc, clods of dirt, wire mesh, wire, bed, pebbles, toothpick, chicken, warts, bays, islands, needle, and so on and so on, to the point of tedium, to excess, and now this kettle popping up like a Jack-in-the-box, without rhyme or reason, on its own, gratis, a luxury of disorder, a splendor of chaos.”

A luxury of disorder and a splendor of chaos—so things went with Zulawski, who died in February at the age of 75. A stylistic maximalist with a reputation for overwhelming intensity, provocation, and going reliably too far, he was one of the few filmmakers qualified to take on the not particularly adaptable Gombrowicz’s giddily deranged prose. Thanks to the former socialist authorities of his native Poland, he was not only a divisive director but also among the most repressed. His 1972 film The Devil was banned, as was his quixotic sci-fi opus On the Silver Globe, a version of which was finally assembled for release in 1988. He experienced better luck abroad, including the hit French melodrama That Most Important Thing: Love (1975) and the West Berlin–set Possession (1981), which, existing infamously at the aesthetic extremities of both art cinema and psychotronic horror, has become something like the director’s signature work. A 2012 retrospective of his work at BAM, the first in the U.S., was affixed with the title “Hysterical Excess,” a descriptor awkwardly positioned between endorsement, disclaimer, and trigger warning. This is not entirely unwarranted—the works of other filmmakers may challenge you to keep up, Zulawski’s jump off the screen and chase you down.

Shortly after encountering the hanged sparrow, Witold arrives at a boarding house run by Madame Woytis (Sabine Azéma), who lives with her husband, Leon (Jean-François Balmer), and her recently married daughter, Lena (Victoria Guerra). He has come to prepare to retake a law exam, and is joined by his friend Fuchs (Johan Libéreau), who seeks to skip work out of spite for his bosses. Also present are Lena’s husband Lucien (Andy Gillet), and a housemaid playfully nicknamed Catherette (Clémentine Pons), whose deformed lip transfixes Witold. Also attracted by Lena, Witold becomes obsessed by the contrast between of the two young women. In turn, his fixation with their duality is further paired with his own interrogation of the dead bird as a telling erotic counterpart to his metaphysical forensics.

Outside of this setup, what passes for plot is generated by the characters’ whims and wills. Not for nothing does Cosmos center around vacation—for all its frenetic movement, this is a story at least in part about idleness and boredom, and how they incite the characters to fabricate the stuff of narrative, either through Witold and Fuchs’s detective farce or through the calamitously nervous habits of their housebound hosts. In this way, the film recalls the work of an unlikely peer, the recently departed Jacques Rivette, whose cinema wove a congruent web between play and conspiracy, philosophy and paranoia. But while Rivette couched his gamesmanship in a subtle, sneaky visual classicism, Zulawski’s film is built on his unusually visceral mise-en-scene, which uses extremes of movement and performance to generate energy for energy’s sake, in the manner of a noise band or free jazz outfit.

Accordingly, Cosmos is also a showcase for the director’s idiosyncratically physical approach to acting, most famously exemplified by Isabelle Adjani’s brutally elongated miscarriage in Possession, in which her character is seemingly disassembled and then reborn through the sheer force of her own ceaseless, spasmic motion, all in the course of a single, unbroken take. As tormented intellectual Witold, Genet is a marvel of physiognomy. With the dense black hair and lanky frame of a Euro-Romantic Joey Ramone, he alternately broods and provides classic Zulawski outbursts, bulging his eyes until his veins threaten to pop (and doing a killer Donald Duck impression, to boot). His hosts are driven to similar fits. Madame Woytis has a penchant for banging things while her daughter disruptively contorts her body and face, though both are outdone by Leon, who methodically makes balls out of bread and, in one of the film’s genuinely shocking images, sprinkles salt on a wart then pokes at it with a toothpick.

The energy and effusion of these performances emulates the feverish verve of Gombrowicz’s writing voice—in his novels narrative and even reason are overwhelmed by an obsessive, highly performative pleasure in language itself. Often, the linguistic acrobatics are set directly against logic, reveling instead in what might be called the paradoxical perverse: “A soaring bird appeared—high in the sky, immobile—vulture, hawk, eagle? No, it was not a sparrow, and by the very reason of not being a sparrow it was after all a non-sparrow, and being a non-sparrow, it was, in a small way, a sparrow.”

To capture the novel’s complex treatment of items—every detail is at once itself, its opposite, a worthy object of obsession, and an immaterial yet pivotal component of a consuming, inscrutable whole—Zulawski relies on the medium’s inherent powers of amplification, the way that anything can become more than itself through the sly magic of composition and montage. The camera lovingly dotes upon the surrounding animal life, including sparrows, frogs, reptiles, and insects (one notable slug slimes its way across Witold’s breakfast tray and is questionably removed from a bread roll into a ramekin of butter). Selective, mysterious framings lend extra potency to Witold’s erotic fixations, an aspect of the narrative evidently of particular interest to the filmmaker. In the novel, the protagonist is taken with female mouths; here, Zulawski affixes him with an old-fashioned foot fetish to boot.

But Cosmos is not simply an absurdist romp (though it is a very good one); it’s also a surprisingly moving meditation on time and mortality. The film’s unexpected emotional anchor is Leon, played by Balmer in a magnetic, highly literate performance. A foil to Genet’s Witold, who’s possessed by a youthfully idealistic intellectualism, Balmer plays the middle-aged Leon as bitter, curdled by a squandered life and idle days. He finds comfort and a not inconsiderable measure of antisocial vengeance in an overtheorized onanism, deemed “bleurghing,” a term he sneaks vindictively into his cutesy-poo private dialect (“You sir, would like to get into-bleurgh the panties of my almost daughter”). Nonetheless able to affect bourgeois dignity, Leon boasts a quasi-religious devotion to his own solipsistic pleasure to rival Witold’s dedication to the mysteries of the universe.

If this pas de deux between inflated youth and rotten age presents a grim vision of the human life cycle, the movie itself offers enough humor and sensual beauty to retain a luminous levity. The score, by Zulawski’s longtime collaborator Andrzej Korzynski, is ironized muzak-style schmaltz, an effective gag unto itself, and the film’s editing, a syncopated mix of premature and off-beat cutting, gives it a solidly comic rhythm. Shot in fecund northern Portugal over the course of a rainy winter, the landscape is verdant yet often counterposed with a spectral fog. Similarly, the film is gorgeous, ceaselessly lively and funny, while also evincing a melancholic view of the human condition. Cosmos may be its director’s most complex and moving artistic statement, though it rarely stops reminding us that it may be amounting to nothing at all: Bleurgh.