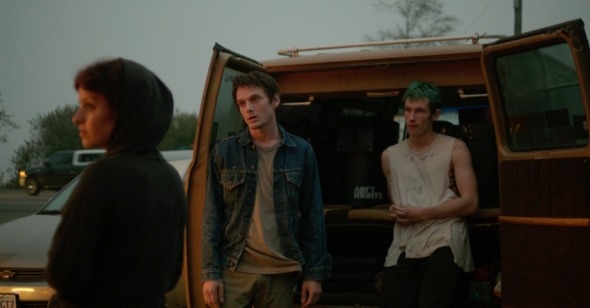 Dunk the Punk
by Nick Pinkerton

Jeremy Saulnier’s Green Room is one of those movies that telegraphs its intentions so completely, scene by scene and shot by shot, that it practically writes its own press notes. It’s an “atmospheric” nail-biter, a “take-no-prisoners, down-and-dirty, gore-soaked” throwback to “the classic ’70s action-thriller,” anchored by a “menacing, against-type” performance from Sir Patrick Stewart. The film concerns a touring punk band who find themselves holed up backstage in a last redoubt, under siege by neo-Nazi skinheads, and you’ll never find a movie more groaningly stuffed with “authentic” bona fides, from the ultra-graphic gore effects to the DIY hardcore milieu. But just as there are plenty of dreadful record collector bands, to borrow a phrase from Joe Carducci, there are plenty of with-it filmmakers like Saulnier who would undoubtedly put together a helluva carte blanche at a receptive repertory cinema, who have all the right cinematic points of reference but no true north.

As Green Room kicks off we get in the van with the Ain’t Rights from Arlington, Virginia, who are clear on the other side of the country in the Pacific Northwest. They barely outnumber their audience at their last show, and are about to throw in the Crass back patch, out of cash, gas, and couches to crash on, when their booker puts them onto a gig further down the coast—a healthy guarantee, but a “boots-and-braces” crowd. They go for it, and after some initial tension—they open with a defiant cover of the Dead Kennedy’s “Nazi Punks Fuck Off”—even get the crowd on their side. They’re almost out the door with money in pocket when bassist Pat (Anton Yelchin), realizing that the band’s communal iPhone has been left in the green room, runs back to grab it, and discovers a young woman splayed out on the floor with a butterfly knife stuck in her skull, surrounded by a hysterical friend (Imogen Poots) and a few very large men deliberating over what to do next. Having seen too much, the Ain’t Rights are firmly, forcefully quarantined into the room while the show winds down. The police are coming, they’re repeatedly told by an authoritative man with a British accent, though in fact their captors are waiting until dark. From here a standoff begins, as the Ain’t Rights, in an uneasy alliance with Poots’s Chelsea cut–wearing Amber, hole up behind the door, and a small army of “red-lace” diehards assembles outside under the direction of ringleader Darcy (Patrick Stewart). It becomes evident that the man with the accent isn’t fooling around when Pat, sticking his arm through the door for a supposed truce-making deal, sustains an injury that pretty well guarantees that his bass-playing days are over.

Green Room is a very fussily photographed film about very clumsily committed acts of violence. Based on this and Saulnier’s previous film, Blue Ruin (2013)—I haven’t seen and can’t speak for his debut, Murder Party (2007)—he has a fascination with how amateurs respond and hold up when pulled into playing deadly games with seasoned professionals, sometimes surprising themselves by discovering a heretofore unknown talent for violence. In Blue Ruin, Macon Blair’s half-ghost drifter protagonist pulls off a long-contemplated act of vengeance almost by accident, and in the ensuing blowback becomes almost battle-hardened. In that film as in Green Room, survival comes from a combination of mettle, dumb luck, and level-headedness: in one scene, Pat’s band mate Sam (Alia Shawkat), clenching a loaded shotgun, is faced with a skinhead and the attack dog he’s just unleashed and sent barreling towards her. She has half a second to make a choice as to where to direct her fire, and if she makes the wrong choice, any remaining Ain’t Rights are going to be putting up Guitarist Wanted flyers. Like the Swedish director Ruben Östlund, Saulnier takes some pains in detailing the peculiar responses of the untrained mind under life-and-death pressure and a massive adrenaline dump. Any doubts that Saulnier is developing the depiction of the greenhorn’s initiation into violence into his auteur calling card are dispelled when Yelchin gives a rallying speech that compares their plight to a paintball game back in Alexandria that pitted disorganized punks against highly trained ex-military experts. (Saulnier seems to favor the quiet, observant, beta male as hero; Joe Cole’s drummer is the tough guy with MMA credentials, but Green Room valorizes the conquering bass player—and nobody ever went broke in this biz flattering nervous cucks.) The speech is interrupted and then resumed just before the climax, one of several corny “callback” bits with which Saulnier peppers the script. The others are a bit of lit-fuse misdirection that ends with a deliberately damp fizzle involving an off-the-leash pit bull and the Ain’t Rights naming their “desert island discs”—during an interview for local radio they rattle off canonical punk bands, but when faced with imminent death they fess up to their pop guilty pleasures.

Among Blue Ruin’s attention-getting hooks was the fact that Saulnier pulled double-duty on the film, credited as director and DP. Saulnier started off as a cinematographer, his highest-profile assignments an ongoing collaboration with Matt Porterfield extending from Hamilton (2006) to I Used to Be Darker (2013), and despite the presence of Sean Porter (It Felt Like Love) as DP on Green Room, I think Saulnier is still basically a cinematographer. The performances in Blue Ruin, including Blair’s, weren’t particularly credible, but I was inclined to cut Saulnier some slack then, because what was good about the film—a close, urgent involvement with the immediate and desperate concerns of its hunter-turned-prey protagonist; an ability to put across the feeling for a roadside America that rarely seems to make its way into our contemporary movies; and a taciturnity that holds up until a ridiculous sins-of-the-fathers climax—could be written off to the exigencies of a shoestring budget, and you could hold out hope that the director might have a real movie in him.

That movie isn’t Green Room—don’t get me started on those heavy color-symbolism titles—though this one was obviously made with an extended credit line, most of which seems to have gone to name actors and realistically horrifying prosthetics. Incident and emotion play less of a role in determining the frame than pictorial grandstanding, and all of the shallow depth-of-field and moody haze feels like the work of a DP padding his reel. When the Ain’t Rights head down the coast to their next show, we get a helicopter shot that suggests they’re on their way to headline at the Overlook Hotel. During the Ain’t Rights gig, Saulnier shows us little vignettes from the heat of the pit—oxblood Doc Martens pounding red Solo cups flat—in sumptuous slow-motion, so there’s no question whose performance we’re meant to be admiring. This all-frills genre filmmaking, suspended in an aspic of artiness, has been the special provenance of distributor A24 (Under the Skin, Slow West, Ex Machina). Saulnier is able to trot out impeccable “influences” when asked—Sam Peckinpah, George Miller, John Carpenter—but his actual product is closer to the portentous, lead balloon-artistry of John Hillcoat or Andrew Dominik.

As the Ain’t Rights’ desert island discs are mostly postures, does Saulnier’s punk movie conceal a pop heart? Well, the milieu does have some practical application for constructing a thriller. That an all-ages show playing host to a white power noise matinee would take pains to find a venue away from the prying eyes of the police makes sense. The band are luddites, only letting their music out on vinyl and sharing a single iPhone between the four of them, which makes it easier to cut them off from the world without anyone inquiring into their whereabouts. (When they discuss a devotion to the analog in the radio interview, it might be Saulnier talking about his gore effects—which are indeed squeamish and effective.) But to see the difference between using a setting for “color” and uniting it with content, you only need to look at Walter Hill’s Trespass (1992). Like Green Room, it’s a back-to-the-wall, no-way-out thriller, with two white good ol’ boy Arkansas firemen (Bill Paxton and William Sadler) on a treasure hunt in an abandoned building in East St. Louis when they find themselves pinned down by a black street gang. But where Saulnier only uses the Sieg Heil-set as easy heavies and for the facile shock of hearing Capt. Picard drop an n-bomb, Hill—working from a script by Bob Gale and Robert Zemeckis—goes heedlessly into the racial tension incipient in the situation. (To return to Östlund, Saulnier at no point has suggested the acuity of social observation that might produce something like Östlund’s 2011 Play.)

Green Room, of course, doesn’t stint on the torn-out throats and headshots and a great big belly being opened with a box-cutter—it’s “unrelenting” and “visceral” and everything else that you’ve heard on the heels of “major festival buzz.” It certainly isn’t worse than most of this year’s crop of middle-range genre material—Kevin Costner’s Criminal, for example—and it is a great deal more “extreme.” None of which prevents it being a total and abject cop-out, artfully composed and utterly comatose.