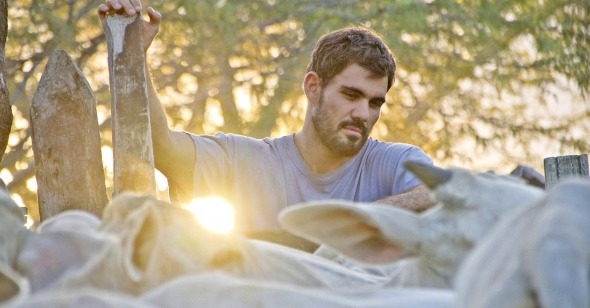 The world of Brazilian filmmaker Gabriel Mascaro‚Äôs Neon Bull is one of beautiful mismatches. A man whose daily work depends on his animalistic, muscular bravado prefers the solitary, gentle hobby of designing and sewing women‚Äôs clothes. Bucking, snorting bulls that could pummel and toss a human like a ragdoll with a flick of the shoulder take on the grace of angels. Coworkers at an itinerant rodeo form something that feels like a family unit, one formed out of affection as much as circumstance, while remaining essentially isolated from one another. As with any good filmmaker, Mascaro uses the camera to help us see the world a little differently, a little more clearly. There‚Äôs something casually virtuosic about his new film, a work of strange realism that immerses the viewer in a natural yet defamiliarized environment of everyday ritual.

Set in rural northeast Brazil, Neon Bull settles in with the workers of the vaquejada, the country‚Äôs specific brand of rodeo sport. Everyone there goes about their jobs with the committed passivity of longtime employees. Iremar (Juliano Cazarr√©, a Josh Brolin lookalike) preps the bulls for action, helping to hold them and chalk up their tails before letting them loose, an intense job that obviously requires great strength but which we never see him complain about; truck driver Galega (Maeve Jinkings) works as an exotic dancer for hooting male patrons, her body not objectified so much as dehumanized, as when we first see her perform she wears an enormous horse head over her own while the rest of her more exposed body gyrates; her prepubescent daughter, Cac√° (Aline Santana), meanwhile wanders around the rodeo‚Äôs grounds, often alone, a seemingly content lost child. Mascaro observes these and other characters who satellite them with informal fascination, letting the almost sculptural configurations of their bodies speak for the whole. Iremar‚Äôs devoted pastime of sketching and constructing women‚Äôs clothes, for instance, is presented as less an expression of his soul than as a matter-of-fact extension of his routine and of the complete material world Mascaro creates. (One can imagine another, lesser filmmaker painting Iremar in broader strokes as an ambitious, thwarted dreamer.) One comes away from Neon Bull not with a sense of these people‚Äôs dreams and desires, but of how they function within their circumscribed environments, of the almost ceremonial nature of how their physicality is employed.

The film constantly circles around questions of entrapment: social and economic, but also physical, as is clear from the opening tracking shot, of bulls fenced in the pen, squashed cruelly on top of one another, waiting for their unwanted moment in the spotlight. The rodeo itself, in which two foolhardy, brawny performers on horses must assist each other in taming these approximately 2,000-pound creatures by grabbing their tails and bringing them to the ground, is an obvious and very public example of man‚Äôs attempts to harness and control nature. Mascaro implicitly draws parallels between the looming presence of the animals and the physicality of the people who surround them, fashioning a radiant study of the body that miraculously avoids being patronizingly aestheticized. It‚Äôs a conceptual film that feels breezily naturalistic as it floats along.

With Cazarr√©‚Äôs constantly unbuttoned pink shirt displaying his sculpted chest, and Jinkings‚Äôs lithe, frequently revealed body outfitted in Iremar‚Äôs scantily crisscrossed creations, Neon Bull is a film of freefloating eroticization. The film is punctuated by sexually extreme moments: Galega waxing her pubic hair in her truck‚Äôs driver‚Äôs seat‚Äîa public and private space‚Äîthe camera discreetly yet suggestively positioned on the passenger seat; an extended, late-night fuck session between Iremar and a very pregnant security guard atop a table in the factory where she works; a scene of surreptitious, unmistakably authentic bull milking. Yet even the most graphic moments never feel like they‚Äôre being included for mere shock value, rather they‚Äôre natural visual and circumstantial conditions of a world where there's a constant negotiation between mind and body.

The presence of young Cac√° complicates and deepens these matters, of course. Introducing a child into this environment of testosterone, heaving bodies, and all-consuming sensuality is another of the film‚Äôs essential, necessary incongruities. Yet ultimately she and Iremar are revealed as possibly kindred spirits: when Iremar reclines with a sticky, used nudie mag, he sketches a bikini over the photograph of a woman‚Äôs body, planning his next outfit; when the little girl comes across the magazine, she also uses it as a kind of blank canvas, sketching horses all over the page. The amusing desecrations of these printed images reveal Iremar and Cac√° as essentially creatives, branding their personalities on the page just as, on his wider canvas, the gently dynamic Mascaro asserts their individualities against the landscape. There's no grander statement to be made here than that these people are part of this world‚Äîbut, after all, that's a pretty grand statement to make.