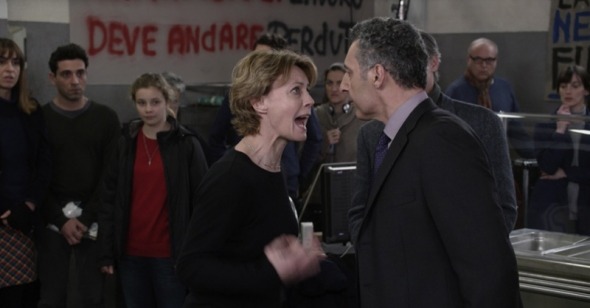 Working for a Living
By Michael Koresky

Just as there‚Äôs no one correct way to grieve the loss of a loved one, there‚Äôs no right or wrong way to make a movie about death. There has been a particular wealth of films from around the world that deal directly with the loss of a parent over the past year, and each of them has taken a distinct approach: as a work of poetic meditation (Laurie Anderson‚Äôs Heart of a Dog) or of emotional abstraction (Chantal Akerman‚Äôs No Home Movie); in one case the death leads to liberation (Terence Davies‚Äôs Sunset Song), in another it represents a larger socio-historical loss (Jia Zhangke‚Äôs Mountains May Depart). In many ways, these are all more aesthetically rigorous, daring films than Nanni Moretti‚Äôs Mia madre, which risks being the least appreciated of these by virtue of its relatively anodyne nature. Visually or thematically, it has no intention to disrupt its audiences or get them to question their own notions about death and mourning. Nor does it need to: Moretti‚Äôs film is no less personal for being straightforward in its aims, sketching a fleet portrait of the difficulties of balancing personal challenges and professional goals.

Mia madre modestly aims for sensitivity and, despite its personal and specific milieu‚Äîthe world of high-budgeted Italian filmmaking‚Äîuniversal relatability. It also has a smart and generous casting stroke: though it‚Äôs fueled by writer-director Moretti‚Äôs own experiences tending to his mother in her final months, he gives the film a distaff twist. The central role of the harried filmmaker and divorced mother in Rome, torn between hospital visits and on-set trials, is played by middle-aged actress Margherita Buy. Inhabiting Moretti‚Äôs surrogate role with barely composed apprehension, Buy is a complex screen presence, at one moment warm, the next hostile, firmly in command yet self-doubting. Moretti cedes the floor to Buy, whose character is also named Margherita; in turn, Moretti appears in a supporting part as Margherita‚Äôs caring brother, seen mostly bedside in his mother‚Äôs hospital room. This both makes more palatable what might have been an overly metacinematic, even self-regarding portrayal of professional crisis and allows for more nuance in his main performer than he himself was able to give in films like Caro Diario and The Son‚Äôs Room.

Further marginalizing his on-screen presence, Moretti offers a buoyant and brash John Turturro in a showy secondary role as an American movie star who proves to be the source of most of Margherita‚Äôs filming headaches. Given the aptly irritating name Barry Huggins, Turturro‚Äôs character, cast as an Italian factory owner stomping on a union strike, instantly hits on the director while half-dozing in the back of her car after she picks him up from his transatlantic flight (this immediately after he claims to have been dreaming that Kevin Spacey was trying to kill him). With his grandiose personality, erratic behavior, and clumsiness with the Italian language, Barry is the last thing Margherita needs at a moment when her off-set life is in shambles. Not only is her mother‚Äôs health failing‚Äîshe has contracted pneumonia after a bad fall, and her heart has enlarged‚Äîbut she has also recently broken up with her boyfriend. Barry, with his significantly embellished anecdotes about working with Stanley Kubrick, his diva tantrums (sometimes real, sometimes playful, always jarring), and his loudly proclaimed actors‚Äô neuroses, is the looming, unleashed manifestation of Margherita‚Äôs anxieties.

Providing a necessary, soft contrast to this wrecking ball of a man is Ada, the sick, but still glowing and cherubic mother. As played by veteran actor Giulia Lazzarini, she‚Äôs a bit idealized, perhaps, for a character meant to elicit so much regret and agony in her grown daughter, but there‚Äôs something touching about Moretti allowing us to see right through to her inherent goodness. Like the director‚Äôs mother, Agata Apicella Moretti, who died in 2010, Ada is a Latin teacher and a renowned Classics scholar, qualities that are poignantly exploited in moments during which Ada tries to keep tutoring Margherita‚Äôs teenage daughter, Livia, in high school Latin. Scenes with the lovely, seemingly flawless Ada are so repeatedly used as buffers between Margherita‚Äôs behind-the-scenes explosions with Barry that the film threatens to become rather schematic: at one point, Turturro, with expected flair and volume, tantrums and threatens to leave the film, screaming that it‚Äôs time for him to go ‚Äúback to reality!‚Äù After a sharp cut, we‚Äôre in the hospital, this fictional world‚Äôs idea of reality. Yet Moretti, as usual, is so gentle in his self-referential approach that his films rarely seem aggressive or overburdened by structural conceits.

Turturro takes up a lot of space, physically and emotionally, in Mia madre, but Buy is always the focal point; even in the American actor‚Äôs big scenes, the camera makes sure we‚Äôre watching her. Buy is magnetic‚Äîa subtly expressive and wonderfully reactive actor whether her character is adjusting to her mother‚Äôs latest prognosis or responding to some of her cast members‚Äô concerns regarding her vague directives about the importance of detaching themselves from their roles (‚ÄúThe actor must be next to the character,‚Äù she repeatedly, unhelpfully suggests, in what feels like an admittance by Moretti that perhaps he has not always clearly communicated his thoughts on-set). If the film occasionally makes it impossible for Buy to not over-emote, such as during a particularly untimely flood in her apartment or a histrionic flashback in which she purposely smashes her mother‚Äôs car into the side of a building out of frustration, she disallows her character from becoming either martyr or monster. It‚Äôs fascinating that Moretti has made the character he plays in the film, despite his patient selflessness‚Äîhe takes risky extended leave to take care of his mother‚Äîso much less central to his film, and therefore less clearly autobiographical. By identifying with Buy‚Äôs director, and thus making us do so, he reveals a profound generosity of spirit. It‚Äôs a movie about death that feels imbued with vivid life.