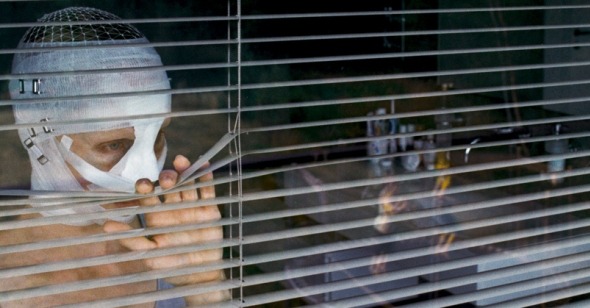 House of Pain
By Michael Koresky

An air of cool sophistication can hardly conceal the true geek-show nature of Veronika Franz and Severin Fiala‚Äôs Goodnight Mommy. Accumulating plaudits and gasps on the festival circuit over the past year for its mix of psychological unease and gross-outs, the Austrian filmmakers‚Äô debut fiction feature (they codirected the 2012 documentary Kern) deliberately sets out to make its viewers uncomfortable, with tactics that prey on nerves as well as gag reflexes. If that were all a film needed to do to earn its credibility and worthiness, Goodnight Mommy would be destined for classic status, but it grows so single-minded in its audience-prodding that this horror lover eventually wanted nothing more than for it to end as quickly as possible. Its central story and characters feel like they exist in service of its punishing aims rather than the other way around.

The great recent horror films‚ÄîBen Wheatley‚Äôs Kill List, Jennifer Kent‚Äôs The Babadook‚Äîput audiences through the ringer and trade in some pretty nasty imagery, but they do so with an emotional honesty that allows for empathetic engagement. In contrast, Goodnight Mommy offers the thinnest of narrative rationales for its graphic unpleasantness and drawn-out physical torments. This is unfortunate, because the film‚Äôs first half is a compelling little exercise in subjective trickery. Employing stringent, coldly tasteful compositions redolent of a particular brand of European art cinema, Franz and Fiala beckon us into the interior world of preadolescent twins Lukas and Elias (played by Lukas and Elias Schwartz), who scamper about the grounds and creep through the rooms of their mother‚Äôs sleekly modernist country home, avoiding her as though she‚Äôs a sleeping lion. On the face of it she does initially seem like a monster. Her visage mysteriously covered in bandages, leaving only narrowed eyes and the trace of a scowl to peek out from the gauze, the mother is recuperating from some kind of reconstructive facial surgery, though, despite some fleeting, possibly unconnected references to an ‚Äúaccident‚Äù it‚Äôs not clear whether the operation was by choice or necessity. Making this bizarre mother figure (eerily inhabited by the placid-looking, immensely foreheaded Susanne Wuest) even more alien is her penchant for closing herself in her bedroom, lying immobile, or standing stock still in front of mirrors, inspecting every inch of her naked body as though it were a new skin. Furthermore, she seems given to random fits of splenetic rage, screaming, and violent wrestling bouts that seem to be taken out exclusively on Elias. These early scenes have the feel of a child‚Äôs nightmare, not unlike Bernard Rose‚Äôs unparalleled 1988 British horror film Paperhouse, which features one of the most haunting scenes of my youth, in which a young girl, trapped in a dream world, reimagines her estranged father as a blind, hammer-wielding maniac.

If the mother is all concealed, frustrated rage, Lukas and Elias would seem to be open books, but they are equally unreadable, their benign, wide-set eyes and blond hair masks of their own; whispering in each other‚Äôs ears, they seem to be hiding some unspoken trauma. The film appears at first to be an exercise in childhood perspective, but as viewers we are constantly kept at an intriguing arm‚Äôs length from these impenetrable two, asked to both sympathize with and fear the boys: among other strange behavior they catch and jar the many large cockroaches from around the house, and have odd plans for a dead stray cat. The mother, with her Eyes Without a Face facelessness, strikes an unsettling pose, but it‚Äôs when the youngsters‚Äô imaginations run wild that the real horror begins. Lukas and Elias are convinced this mummified monster isn‚Äôt mum, and only grow more suspicious after she finally removes the bandages to reveal her newly reconstructed face. Increasingly aggressive in their battle to prove that she‚Äôs an impostor, the twins begin a reign of terror that will be catnip to fans of cinematic torture and intimations of matricide, and castor oil for everyone else.

The last-act turn‚Äîwith mean mommy bound to the bed and pleading for her precious tots to stop inflicting horrific pains, which in keeping with the film‚Äôs themes are mostly visited upon her face‚Äîis disappointing not because of its gruesome imagery, but because it reduces a potentially provocative narrative about trust, identity, and interiority to a series of cheap audience gooses. (My fellow moviegoers surely weren‚Äôt fearfully ruminating on familial trauma when they were squealing in agony at a scene involving superglue, manicure scissors, and mommy‚Äôs lips.) Franz and Fiala also betray the triteness of their little funny game when they indulge in an endless meta-suspense gag right out their countryman Michael Haneke‚Äôs handbook, toying with the viewers by having a couple of bumbling Red Cross workers almost discover tape-gagged mom while Lukas and Elias ply them with lies.

Increasingly histrionic, Goodnight Mommy ultimately settles for cheap thrills. Its self-consciously sleek aesthetic seems, in the rear-view mirror, a ruse. After all, if the same story were set in a less architecturally striking, lower-to-middle-class home, decorated not with artfully blurred framed photographs but with flowered wallpaper, would anyone mistake this film for ‚Äúcerebral‚Äù? There‚Äôs a tangible and effective dreamlike quality to much of Goodnight Mommy and an attention to jarring aural details (mommy crunching on a particularly loud cracker; her high platform shoes clomping around the house) that leads one to believe that Franz and Fiala are genuinely talented filmmakers capable of creating visceral experiences without shoddy foundations and shock effects. By keeping us artfully outside Lukas and Elias and their mother, Goodnight Mommy reveals itself as a horror film lacking in empathy. A final tragic twist, meant to make us reassess all that came before, only feels like further emotional exploitation and serves to underline the joylessness with which the filmmakers have indulged in this nasty bit of business.