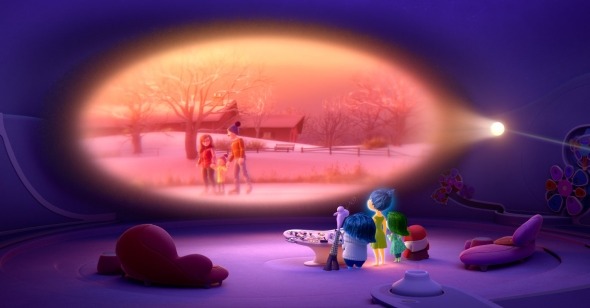 The Life of Riley
by Jeff Reichert

Every time a Pixar film is released, the dominant auteurist frame through which the work is viewed is generally the studio itself. Though as Pixar’s oeuvre grows, and some of its regulars branch out into live action filmmaking, this is starting to change. The relative aesthetic anonymity of the likes of Brad Bird, Andrew Stanton, Lee Unkrich, John Lasseter, and Pete Docter has something to do with the free-flowing collaborative nature of their projects—many are often listed as codirectors, screenwriters, or story creators on the others’ films—but also the long gestation period for these CG animated works; Docter, for instance has directed only three films since 2001. The Pixar trademarks are by now well-known: that winsome quality, the focus on moments of personal realization and self-acceptance, their climactic chase sequences—Docter’s Inside Out fits all of these criteria. If Bird is the member of the gang most likely to underline his action with he-man Ayn Randisms, Stanton the most skillful visual stylist, and Lasseter something like the animated world’s John Landis, the images that Docter conjures, especially in Up and now Inside Out, recall the elemental humanistic pull of Ozu or De Sica, perhaps because he’s more regularly populated his films with human characters.

There’s a delightful hubris motivating Inside Out. The studio, which has over the past two decades anthropomorphized toys, bugs, cars, rats, robots, fish, and the monsters of our nightmares, to more or less positive effect, now offers a comic take on the inner workings of the human mind. They’ve done this by creating a motley gang of five colored humanoids who manage the emotions of a preteen named Riley (Kaitlyn Dias) via a control panel in the center of her brain. Led by the irrepressible Joy (Amy Poehler), the group—which also includes Sadness (Phyllis Smith), Fear (Bill Hader), Anger (Lewis Black), and Disgust (Mindy Kaling)—steers Riley through her days, creating memories, symbolized by shiny orbs shaded to match the emotion associated with that memory (red is angry, yellow is happy, blue is sad, etc.) and which, when examined closely, play back the captured moment in black and white, like a moving-picture snow globe. Especially important memories are deemed “core” and stored carefully, but the rest, like most of our memories, get collected each day and sent into Long-Term Memory, a vast maze of shelves containing an orb for each moment in Riley’s life, where they may or may never be accessed again. When Riley sleeps, their day is done.

As the film begins, all has been going swimmingly for the group, as the dominant Joy manages to put a happy spin on almost everything that comes Riley’s way, successfully tamping down the other four emotions, especially the dour Sadness, who can’t quite figure out her place in the group. About the time that Riley’s family relocates from her comfortable home in Minnesota, where she lived in a big house, had a best friend, and played lots of ice hockey, to a dingy little row house on a hilly street in San Francisco, odd things begin to happen. At first, the formerly passive Sadness is found touching joyful yellow memories, turning them blue. Then, on Riley’s first day of school, as she stands in front of the class introducing herself, initially with confidence, Sadness strikes again, and Riley is left crying in front of her new schoolmates as she realizes the life she used to live is no longer. This becomes the first core memory in Riley’s life dominated by sadness, and Joy’s attempts to dispose of the memory send her, Sadness, and all of Riley’s other core memories shooting out into the nether regions of Riley’s brain.

Once Joy and Sadness are ejected from the control room, Docter builds a steady rhythm of cross-cutting between their odd-couple quest to make their way back with Riley’s core memories; the attempts of Fear, Anger, and Disgust to handle Riley’s day-to-day life; and Riley’s immediate experience of this mismanagement. The patter between the irrepressible Joy and sullen Sadness takes on a familiar rhythm, perhaps because anyone with a passing knowledge of NBC comedies from the past decade has seen these characters before—Joy’s can-do spirit isn’t far from Poehler’s Parks and Recreation character, Leslie Knope, while Smith presents as an even shyer, more depressed Phyllis from The Office. The antics of the increasingly panicked Fear, Anger, and Disgust are madcap and amusing, but what’s most intriguing is how this split in Riley’s emotions affects her daily existence. Over the course of what seems a couple of days, the formerly silly and carefree Riley morphs into a tetchy, silent creature, to the bewilderment of her parents, and sometimes even herself. There’s a shock of recognition in the audience: who hasn’t felt those moments of confusion in life when joy seems gone, one’s self feels unstable, and one’s personality, once so familiar, seems to be slowly slipping away?

Docter’s attempts to represent various facets of mind function are many, and are often quite clever—from explaining how annoying jingles come to obsess our consciousness, to literalizing a train of thought running from memory to the control room, to a brain freeze that turns the group into icicles, to an amusing sequence that finds Joy and Sadness stumbling into the place where Riley’s dreams are made (a movie studio, of course). Between long-term memory and the elevated control room where Joy and the others work lie Riley’s Personality Islands—theme park-like structures built to honor her love of family, hockey, honesty, and goofiness. On one of her first nights in San Francisco, Riley tries out for a local hockey league, but with her emotions thrown out of whack, she misses a shot, falls flat on the ice and storms off in a huff. After a tantrum at home in which she vows to give up hockey forever, the personality island devoted to hockey crumbles into the void below. Whether a child viewer will grasp this all enough for it to resonate is questionable, but here adults are invited to reflect on their own lives, likely filled with crumbled islands, doors once open, shut, often cruelly, in our faces by fate, luck, our own weakness or inability. Life, suggests Inside Out, is destined to include disappointment.

It’s also meant to include melancholy, as Joy and Sadness learn when they come across Boing Boing (Richard Kind), Riley’s magenta elephant-like best friend wandering lost in the halls of long-term memory. Boing Boing makes for an erratic, unlikely ally, first recommending that they take a shortcut through Abstract Thought, which finds our heroes in a blank white space and wrenched into cubist figures, flat 2D forms, and then, finally, simple colored lines as they hurry to the exit before they’re destroyed entirely. It’s one of the most radical pieces of animation bearing the Disney name since Fantasia. Boing Boing’s end in the narrative finds Sadness coaching him through his realization that he has no place in the life of an eleven year-old girl and has a similar bittersweet pathos as that moment with Jackie Paper stopped visiting Puff in Honali, if Puff had had some counseling. Inside Out, like many Pixar films is interested in tugging the heartstrings, but is bolder than most because it attempts to visualize the mechanisms by which our heartstrings are tugged.

We get to see inside several other minds in the course of Inside Out: Mom (Diane Lane), Dad (Kyle MacLachlan), a dog, a cat (most hilariously), yet Riley’s is the only mind whose emotions are ruled by both men and women. This is doubtfully a nod to non-binary gender fluidity and represents that rare moment in a Pixar film where a puzzle piece seems left out of place. Still, have any other recent films concerned themselves with that tremulous moment on the cusp of adulthood when we realize the necessity of sadness or that memories can evoke several, often contradictory feelings at once? (At the end of the film, a newly minted yellow-blue orb suggests the introduction of the bittersweet into Riley’s emotional lexicon.) In Up, Docter told the lifespan of love story in miniature and showed his audience that life could be sad; Inside Out goes further, suggesting the absolute necessity of sadness to finding true joy. It’s a lovely lesson and a lovely film. Lovely—maybe that’s the best word for Pixar entire, suggestive as it is of warmth, comfort, pleasure. We may never see a Pixar film aimed squarely at adults, but Inside Out comes as close as they’ve gotten to date. There’s much here its viewers can only fully feel if they have lived past childhood.