The Kidnapping of Michel Houellebecq 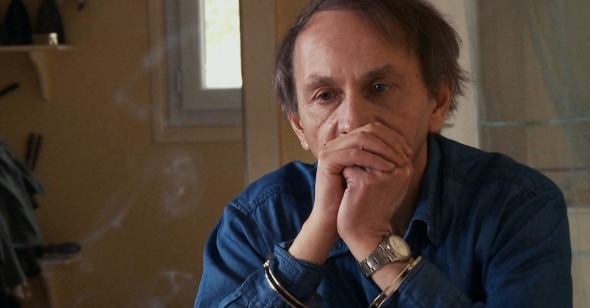 A Man Escaped
By Nick Pinkerton

It is a mistake to confuse the discourse of characters in a novel with the discourse of their author, though Michel Houellebecq takes a perverse pleasure in encouraging this confusion. For example, when Daniel, the comedian protagonist of Houellebecq‚Äôs 2005 novel The Possibility of an Island, discusses the appraisal of his one-man shows, he uses terminology that might well apply to the pull-quote characterization of Houellebecq himself: ‚ÄúI was a cutting observer of contemporary reality‚Ä¶ I had found myself cast in the role of a hero of free speech.‚Äù

The ironic use of italics to single out clich√© and id√©es re√ßues is a device to which Houellebecq has frequent recourse, in this following the example of Flaubert, although the writer to whom Houellebecq has most often been compared is Louis-Ferdinand C√©line, more a matter of their Molotov cocktail impact upon the French literary scene, Swiftian outrageousness, and reactionary brio than a direct stylistic kinship. Like C√©line, Houellebecq has had his exile and his trials, the latter connected to defamatory remarks about Islam, and followed by stints abroad in Ireland and Spain. In connection to the publication of his latest novel, Soumission, which imagines France in 2022 on the brink of becoming a Muslim nation, Houellebecq was the cover star of the last issue of the satirical magazine Charlie-Hebdo to go to press before the fatal attack on their Paris offices of that left twelve dead. He has, then, been cast in the role of a hero of free speech‚Äîan irony, for as Daniel goes on to note, ‚ÄúIt‚Äôs amusing to observe that it‚Äôs always the enemies of freedom who find themselves, at one moment or another, most in need of it.‚Äù In fact Charlie-Hebdo makes a brief appearance in Houellebecq‚Äôs 1998 novel The Elementary Particles, referred to as part of a new breed of ‚Äúnotionally left-wing‚Äù magazines which in fact ‚Äúembraced the ideals of the entertainment industry: the destruction of Judeo-Christian values, the supremacy of youth and individual freedom.‚Äù

Houellebecq situates the appearance of Charlie-Hebdo along a timeline of the commodification of sexual ‚Äúliberation‚Äù on which he also more or less explicitly places the films of Jos√© ‚ÄúThe Antonioni of Pigalle‚Äù B√©naz√©raf and Just Jaeckin‚Äôs Emmanuelle. Even with his personality refracted through his creations, Houellebecq‚Äôs literary production has some of the quality of the one-man show, in no small part thanks to his frequent recourse to the monologue, his digressive by-proxy critical judgments on such subjects as Agatha Christie, Vladimir Nabokov, John Grisham, Larry Clark, Julian Lepers, and Brazilians. Houellebecq is a performer, and considers no stage closed to him. He writes poetry, examples of which litter his novels, as well as references to the fields of science and philosophy. Like C√©line, he has dabbled in playing singer-songwriter, releasing a full-length album, Pr√©sence humaine, in 2000.

He also moonlights as a photographer‚Äîthough none of these extra-literary ambitions have been pursued at as great a length as his interest in the cinema, which evidently dates back some ways. Houellebecq is credited as the director of two 16mm shorts, Cristal de souffrance and D√©s√©quilibres, dated 1978 and 1982, which neither I nor anyone that I‚Äôve asked have seen, the former made with his friend (and fellow future novelist) Pierre Lamalattie when they were still students at the Institut National Agronomique Paris-Grignon, also the alma mater of litterateur/filmmaker Alain Robbe-Grillet. The narrators of his novels are often found dreaming up films, sometimes even completing them: The Massage Room in 2001‚Äôs Platform; Two Flies Later and Highway Swingers in The Possibility of an Island. (Similarly, conceptual art plays an important role in both Island and 2010 Prix Goncourt-winner The Map and the Territory.) Houellebecq has subsequently written or cowritten the screenplays for three of his novels adapted as feature films, Extension du domaine de la lutte (1999), Atomised (2006‚Äîa German adaptation of his Les particules √©l√©mentaires), and The Possibility of an Island (2008), the last which he directed himself.

The Kidnapping of Michel Houellebecq, written and directed by Guillaume Nicloux, is not ‚ÄúHouellebecq‚Äôs film‚Äù in the sense that Trans-Europ-Express (1966) is Robbe-Grillet‚Äôs or Le Camion (1977) is Duras‚Äôs‚Äîunlike the practitioners of the nouvelle roman, Houellebecq suffers from the vicissitudes of adapting existing material to a new medium, rather than adapting the new medium to an existing formal theory. Nicloux‚Äôs film is, however, quite the best cinematic supplement to Houellebecq‚Äôs work that exists. The writer-director‚Äôs career is entirely unknown to me, as it will be for most American viewers. The draw
(or turn-off) here will be Houellebecq, whose literary celebrity crossed the Atlantic around the time of Platform‚Äôs stateside publication. Using as his jumping-off point the rumors of foul play, which popped up when Houellebecq became briefly incommunicado while promoting The Map and the Territory, Nicloux creates a rough-edged staging of the author‚Äôs ‚Äúcaptivity,‚Äù starring Houellebecq himself.

The film begins by following Houellebecq on his daily rounds, filmed in a discreet style that suggests a surreptitious perspective. He discusses renovations to his high-rise apartment, hails a cab and then decides not to get in (we may suspect this is because he‚Äôs wary of the Arab driver, but never learn for certain), discovers a 19th century √©cu coin on the ground, toddles out of a funeral Mass, and visits with the actress Fran√ßoise Lebrun, best known for her role in The Mother and the Whore and her association with another figure associated with the French tradition of right-wing provocation, Jean Eustache. And then, one day, with the greatest of ease, Michel Houellebecq is kidnapped.

Houellebecq‚Äôs three captors are Mathieu (Mathieu Nicourt), a MMA fighter; Maxime (Maxime Lefrancois), a bodybuilder; and Luc (Luc Schwarz), a soldier-of-fortune carrying out the orders of an undisclosed body, boasting a mountainous physique and a Yeti hairdo that recall Jean-Claude Brisseau. They transfer the author to a house in Loir-et-Cher decorated in the cozy rural kitsch style that is quite the same throughout North America and Western Europe. It belongs to an older married couple, Ginette and D√©d√© (Ginette and Andr√© Suchotzky), the parents of one of the kidnappers, who despite their advanced years both look rather more fit than Houellebecq does.

Lost in his oversized parka, Houellebecq appears all the more weedy and slight when compared to such strapping specimens as his jailers. While this sets the stage for a confrontation between the physical and cerebral, the movie skirts or rather complicates this dichotomy, as it avoids most obvious tactics. Here a few words about Houellebecq‚Äôs screen presence are due. Everything about him seems somewhat drained, drab, vitiated, though he perks up whenever he sees an opportunity to take potshots at an inflated reputation‚ÄîMozart, Le Corbusier, etc. He wears his thinning brown hair in a wispy comb-over, close-set eyes contributing to his somewhat Eeyore-like expression. His mouth, in repose, forms a flat-tire frown, a bit like that of Dominique Pinon. Often he has a cigarette pasted to his lips, and he smokes constantly, positioning his cigarette between his middle and ring fingers as he does so, in the fashion of a movie Nazi. (His chain-smoking provides one of the film‚Äôs running bits, in which he whinges ceaselessly over Luc‚Äôs backing off of a promise to entrust him with a lighter of his own.) Houellebecq‚Äôs speaking voice is soft and somewhat confidential, and he is presented here as the embodiment of that ‚Äúparticular combination of arrogance and timidity‚Äù which Orson Welles was quoted as diagnosing in Woody Allen.

If there are any preoccupations that unite Houellebecq‚Äôs work with that of Allen, they‚Äôre a lust for young women and the accompanying fear of death‚Äîthough Houellebecq displays a complete lack of anxiety over his fate before his kidnappers. Instead we see him paying each of them patient attention in turn, watching Mathieu‚Äôs taped fights, playing receptive audience to Maxime‚Äôs competition poses, going out to the garage with D√©d√© to look at the antique car he‚Äôs refurbishing, offering to write Ginette a poem. Flattered by the attentions of this great man in their midst, the kidnappers adopt him as sort of a mascot, supplying him with a Spanish wine that he favors, which he drinks to excess, and, for his birthday, securing the services of a local prostitute. (From Platform: ‚ÄúMy enthusiasm for pussy had not waned; in fact, I saw in it one of my few remaining recognizable, fully human qualities.‚Äù)

The kidnappers are, as Houellebecq might put it, salt of the earth people, and in their company he proves himself to have the common touch. That italicized glint of ironic bemusement is always visible in Houellebecq‚Äôs polite reserve, however, and in his bearing we may discern something of the customary social pose that Daniel describes in The Possibility of an Island: ‚Äú[T]hat attitude of benevolent neutrality that had served me so well in life, that had enabled me to hear so many intimate confessions, in so many different milieus, which I then reused, crudely distorted out of recognition.‚Äù

When his captors pump Houellebecq as their in-house expert in literary matters, he echoes Daniel. Denying the autobiographical nature of his work, he explains, ‚ÄúFor characters, you talk to people‚Ä¶ Talk to a hood, you have your hood part‚Ä¶ I really listen.‚Äù This genial receptivity is proven successful as a survival technique, though Houellebecq‚Äôs composure does crack once or twice, occasions, which tend to revolve around literary questions. In one of the film‚Äôs numerous dinner table scenes, he erupts on the topic of J. R. R. Tolkien. In another, Luc and Houellebecq almost come to blows over whether or not Houellebecq did, as Luc insists, write of purchasing H. P. Lovecraft‚Äôs pillow in his 1988 critical biography of the author, Houellebecq‚Äôs first major publication and a sort-of statement of principles.

The inside-baseball joke in this scene, never resolved, is that Luc is misattributing a misunderstood passage from the Introduction that Stephen King contributed to Houellebecq‚Äôs book, an introduction which Houellebecq has either forgotten or never read. As this should suggest, a familiarity with Houellebecq‚Äôs writing is helpful to appreciating every nuance of Nicloux‚Äôs film, though isn‚Äôt absolutely necessary. The Kidnapping of Michel Houellebecq is on one hand a rather ingenious take on the artist documentary‚Äîa category of film which has in recent years proliferated terribly, producing practically no work of any consequence‚Äîon the other, a tabletop comedy of manners, closer to something by Gianni Di Gregorio or Hong Sang-soo than to Houellebecq‚Äôs own work, fixated as it is in epochal shifts in human development.

Of particular interest to Houellebecq, in fact, is post-human development‚Äîwhat lies on the other side of the desire, the fear and trembling in the face of mortality. Both The Elementary Particles and The Possibility of an Island look back at the contemporary world from a future in which science has curbed the animal appetites which plague man, and often Houellebecq writes like an emissary from the dispassionate Invasion of the Body Snatchers aliens. (Given his interest in New Age cultism, a comparison to the 1978 Philip Kaufman version is apt.) To place the author who began his literary career proper with a screed against the ‚Äúrealistic novel‚Äù in a movie that, stylistically, hews close to the conventions of realism may seem counterintuitive‚Äîand indeed it is‚Äîbut it is precisely this that gives the movie its friction. The inconveniences of his imprisonment, otherwise accepted with equanimity, are the nagging demands of the flesh, but the outcome is never in doubt. He can‚Äôt be held, because he isn‚Äôt there.