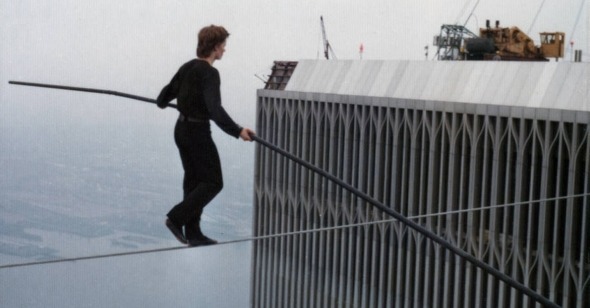 Walking in the Air
By Michael Koresky

A blow-by-blow account of how, in 1974, the impish French performance artist, and ludicrously appropriately named Philippe Petit achieved (and survived) the seemingly otherworldly when he walked on a tightrope situated 1350 feet in the air, anchored between the World Trade Centerās twin towers, James Marshās documentary Man on Wire is a fleet, engagingly narrated, and [insert ātautā here] suspense narrative. Like the events itās based on, Man on Wire is the kind of film thatās more inspiring to witness than it is to later think (or write) about, but let it be said that Marshās adeptness at mounting his tale is undeniable, and what the film lacks in any sort of subtextual richness it more than makes up in narrative functionality and the clarity with which it reconstructs Petitās mission impossible.

Bolstered by quick cutaways to impressionistic black-and-white reenactments in the Errol Morris mold (some so brief and gauzy they appear out of the mist as though Guy Maddin baubles), and, more impressively, beautifully restored archival color footage of a youthful Petit, looking a lot like the athletic young Malcolm McDowell, showing off his lithe and lovely physique as he trains for his fateful trip to New York, Man on Wire jumps back and forth between years-long preparation and the final moments before his gorgeous feat of derring-do. Marsh also employs talking-head interviews with the accomplices who helped Petit realize his vision, and who had either gamely seen the job through to the end or who had backed out due to their own understandable fear (Marsh never bestows judgment on the latter, instead casting everyone as essential pieces in the puzzle). Add in some obvious but well-employed soundtrack cues, from Michael Nymanās The Piano and The Cook, the Thief, His Wife, & Her Lover scores to, of course, a bit of Erik Satieās āGymnopediesā to etherealize Petitās fully achieved air dance, and youāve got a conventionally told but well mounted work of nonfiction action filmmaking, more fixated on the how than the why, and one which will undoubtedly receive plaudits on the basis of its subject matter alone.

Considering that its incredible true story is so prepackaged and ready to go, the film might have benefited from a little deepening psychological profiling, even if Petit himself denies its importance, as he expressed to journalists and police psychiatrists following his arrest. Marsh evidently wants him to remain an enigma, an unknowable angel hovering way up in the cloudsāyet we ask, is it narcissism? A truly desperate need to entertain, to astonish? Sure, we can infer from simply watching Petit on camera and hearing his narration (even when isolated by his enormous distance from those on the ground, he admits that in his mind he can see the crowds watching him), and perhaps maintaining the mystery is appropriate, but the result is that the man becomes less intriguing than his actions. The film doesnāt leave the audience with much more to consider than its fait accompli; its literalness, and its obsessive concentration on practice and action, leave no room for abstraction.

Nevertheless, thereās an appealing symmetry to everything about Man on Wire, from the perfect balance of the ropewalker, eerily contained and calm as he cheats death, to the grandiose towers themselves, captured in helicopter images and fog-enshrouded photographs. In fact, one of Man on Wireās not inconsiderable achievements is that it encourages appreciation of the towers as architecture rather than as mere death monuments. The tragedy of 9/11 remains implicit, but Marsh thoughtfully shies away from mentioning it, leaving it to loom in our own memories; he situates us very firmly in this filmās time and place, never enforcing more on Petitās accomplishments than were notable at his moment of triumph. Perhaps Marshās greatest achievement then is to so convincingly dramatize events through documentary format that we often forget weāre watching events reconfigured and reimagined for narrative fluidity. So implausible is Petitās story that we may feel like saying, āItās like a movie!ā Except that now, indeed, it is a movie.