The Life Before Her Eyes 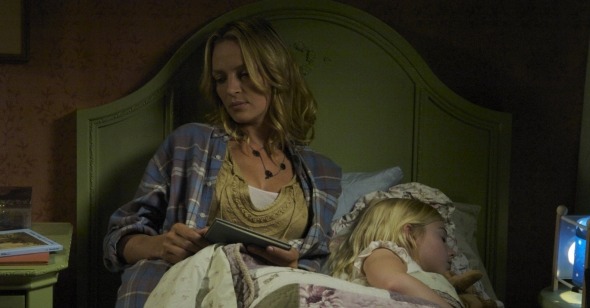 Iâ€™ll Be Seeing You
By Leo Goldsmith

Diana and Maureen are in the girlsâ€™ room, gossiping about boys and bio between classes, when shots ring out. It's the sound of an assault rifle wielded by Michael Patrick, the school nerd, on a violent, Columbine-like rampage. How do we know? â€śYesterday in trig he told me he was going to bring a gun to school!â€ť Diana explains, just as Michael Patrick bursts through the door. The two girls are cornered, and the lanky gunman, taking some time to reload a weapon that's bigger than he is, gives the girls a choice: Which one should he kill?

This scene is the catalyst for the events of Vadim Perelman's adaptation of Laura Kasischke's novel The Life Before Her Eyesâ€”which seems a little odd, as the rest of the film has ostensibly nothing to do with suburban high school rampages. What it offers instead is a reasonably well made, if hopelessly overblown melodrama, which oversteps its mark with pretensions of narrative complexity and social currency. But exploitative though The Life Before Her Eyes clearly is, it's something of a blessing that its treatment of this event is so glib and cursoryâ€”an entire film from Perelman on this subject would be unbearable.

By a not-so-subtle elision, Perelman withholds the outcome of Michael Patrick's ultimatum, focusing instead on Diana's life just before and fifteen years after the tragedy. We get, on the one hand, scenes of Evan Rachel Wood as the high school Dianaâ€”all hair and teeth and bubbly good willâ€”and, on the other, scenes of Uma Thurman as older Diana, busty, maternal, haggard, but still a kooky dresser with butterfly tattoos and an occasional hair-flip. Puzzlingly, but not inelegantly, the film's narrative seesaws back and forth between these two eras, following young Diana's tribulations as the guilt-ridden high school slut (who's contrasted with Maureen, her God-loving, plain-Jane friend) and older Diana's seemingly perfect life of suburban motherhood.

Today Diana still lives in the same town, teaches art history, is married to a dashing professor, and has an angelic, tow-headed daughter named Emma. Diana has placed Emma in the charge of the nuns at the local Catholic school, a move we're to read as a sign of her lingering trauma, like the Guatemalan worry dolls she keeps at her bedside or the vague paranoia that seems to follow her everywhere. Is her husband cheating on her? Has she grown up to be what she and Maureen always feared they'd become: â€śa hard woman who's angry about everything all the timeâ€ť? And, as scenes of Diana's iniquitous high school past continue to haunt her present life, we ask, what happened that fateful day in the girl's room?

The answers to these questions don't ultimately amount to much more than a few weirdly puritanical positions on teen sexuality, abortion, and conscience. But if nothing else, The Life Before Her Eyes offers a unique take on post-traumatic stress disorderâ€”or is it an acid flashback?â€”weaving flowers, bugs, cougars, William Blake, swimming pools, and Alice in Wonderland into Diana's wavy gravy of hallucinations. Cinematographer Pawel Edelman shoots the whole film with the same sort of grotesque plasticity that he brought to the sidesplitting flashback sequences in Ray. But unlike in that film, here there is at least some justification for the artificiality: I won't ruin the head-slapping, faux-Shyamalan ending, but let's just say that the film's fey title is not quite as nonsensical as it sounds.