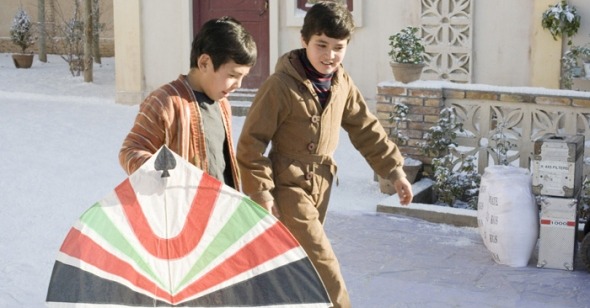 Right off the bat, there are two telltale signs in the Hollywood adaptation of The Kite Runner that portend the safe, diluted entertainment about to unfold. Perhaps nervous that a prestige drama mostly told in the Afghani language of Dari, and headlined by a cast of unknown middle-Eastern actors, might not sell to the multiplexes, the producers have inserted a fancy, interminable credit sequence, backed by Alberto Iglesias‚Äôs overly insistent, lute-heavy score, and adorned with some faux-Persian, animated curlicues. Then it‚Äôs straight to the English-language San Francisco prologue, flatly filmed to look like any anonymous American studio project: kites flying at the beach, happy couple walking hand in hand. Soon enough, thirtysomething protagonist Amir, opening a package to find his newly published book, a la George McFly in Back to the Future, is flashing back to the apparently halcyon days of pre-Taliban Afghanistan.

Here, in 1978, Forster devotes much screen time to the relatively universal trivialities of childhood, like watching glorious American movies and, of course, flying colorful kites‚ÄĒin another desperate attempt to grab the attention of an American audience possibly lulled by the traditional storytelling and proliferation of on-screen foreigners, the latter is rendered in intolerable, remarkably unconvincing CGI, as kites swoop and dip, and their apparently razor-sharp strings go mano √° mano in goofy, impossible close-up. These sequences are the pandering tipping point for a film that actually might have coasted on its serviceable storytelling skills: on a narrative basis, Forster and screenwriter David Benioff keep things moving briskly and fluidly, and the actors are emotionally compelling enough that it‚Äôs easy, in the moment, to overlook the film‚Äôs central thematic dubiousness and specious cultural elisions.

As a purported sympathetic view of Muslims from a dream factory that has always painted them as buffoonish terrorist fodder for Schwarzeneggerian dispatch, The Kite Runner is undeniably something of a baby-steps breakthrough. Yet Forster‚Äôs touristy exoticization infuses nearly every frame, and, with the exception of one brief, late visit to a mosque, religion seems to play little to no part. Furthermore, the rosy glow of Kabul upon the eve of the Russian invasion might certainly have been somewhat diffused had there been a single strong female character (Amir‚Äôs mother died giving birth to him, natch). Of course, this being prime candidate for a Hollywood adaptation, The Kite Runner is an utterly male-centric, culturally translatable narrative, complete with platitudes about what it means to step up and Be a Man (especially in the face of a demoralizing male rape).

There‚Äôs no denying that the central conflict, between 13-year-old Amir (Zekiria Ebrahimi) and his best friend, Hassan (Ahmad Khan Mahmidzada), the lower-class Hazara son of his father‚Äôs servant, is wonderfully performed by the two young actors (who recently have had to be temporarily whisked away from Kabul because of threats on their lives, due to their involvement in the discreetly filmed bully rape scene). Similarly, Iranian actor Homayon Ershadi (unforgettable in Kiarostami‚Äôs Taste of Cherry) adds to his father Baba‚Äôs requisite tough-and-tenderness a wise vulnerability that elevates every scene he‚Äôs in. Yet all this professionalism gives way to an ill-paced, ridiculously plotted second act, which has Amir returning to contemporary, Taliban-ruled Afghanistan to rescue Hassan‚Äôs son, an act that will supposedly right a wrong he had done to his boyhood friend so long ago.

The film version of The Kite Runner is less a work of passion or political commitment than an utterly expected big-screen version of a pricey hot property. It was impossible to board a city subway in the past year without seeing a passenger clutching Khaled Hosseini's bestseller (it seemed second only to Harry Potter in adult reading material). Now that it‚Äôs arrived, with the Oscar-nominated pedigree of Marc Forster (who hasn‚Äôt made an emotionally honest movie since his early-digital debut Everything Put Together), hopefully we can nod and move along. That more people will see The Kite Runner than Iranian master Jafar Panahi‚Äôs authentic, political 2007 crowd-pleaser Offside, is a wrong that not even heroic Amir could ever make right.