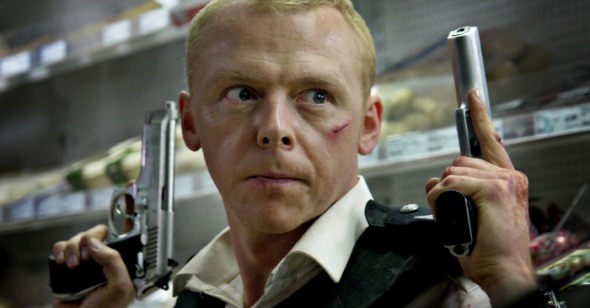 Hot Fuzz is the fulfillment of most any movie-glutted provincial adolescent’s study-hall daydreams—basically, to turn their town into the set of an action movie smash-up. Filming in his hometown hamlet, Somerset, Wells, director Edgar Wright must be realizing set pieces that he mentally storyboarded at age 14; a climax where two characters enact a life-and-death grapple over a scale model of the cityscape, destructively wading through real estate like Toho rubber monsters, reinforces the air of preteen fantasy—Bill Watterson’s illustrations of Calvin stomping through the Cleveland suburbs show a kindred sentiment.

Nick Angel (Simon Pegg, Wright’s longtime collaborator and cowriter), a tightly wound cop working London’s toughest beat, shames the rest of the department with his exemplary arrest record, so he’s shipped off to parochial “Sandford,” a perennial competitor for “Village of the Year,” where the police force is generally more interested in their dessert menu than upholding the letter of the law (the set-up is basically “On Dangerous Ground” played as farce). Teamed with oafish local officer Danny Butterman (Nick Frost, another Wright regular), Angel doesn’t find much excuse for his frontier-style brand of law enforcement, but as he begins to unravel a local conspiracy, the call to bring Michael Bay action to this Agatha Christie backdrop becomes obvious.

Wright and Co. are of the age to have suckled off the usual suspects of 1990s film buff-dom, and it shows: the Coen Brothers and Sam Raimi in the bravura slapstick, the New Zealand films of Peter Jackson in the lavish splatter f-x and parochial approach to American genre. With that maniacal drive for virtuosity that seems to characterize young, club-music-addled European directors, he shoots loads of coverage and assembles it with tweaked, stutter-step editing. Hot Fuzz, along with their breakthrough, 2004’s Shaun of the Dead, are antic genre exercises that gain an immediate sheen of ironic distance through their Englishness; the films are laced with movie references, though nothing too arcane to be left off an “Empire” list (the music cues in Hot Fuzz are similarly populist-vintage, ticking off tracks from Sweet, Adam Ant, T Rex…). All of which may sound borderline intolerable, but it’s not—if only because Wright, who came to feature filmmaking through an apprenticeship in TV comedy, is always looking for unexpected ways to smuggle gags onto the screen, and more often than not they’re pretty funny. Pegg and Frost have a cozy BFF rapport, as they’ve been playing pals vocationally since 1999, when they first teamed for the Wright-helmed pop-saturated BBC sitcom about quarter-lifer fanboys behaving badly, Spaced; they even pull off the inevitable buddy cop-latent homosexuality gag with winning understatement, never getting all het up and panicky.

This intangible of “likeability,” which Hot Fuzz has scads of, forgives much. Some of the parody here is way past its due date—gags about pithy mid-carnage action movie one-liners should’ve been retired with honors after Bruce Willis’s “Traffic was a bitch” in The Player—and there’s a want of any deconstructive insight into the mechanism of the cop movies that goes deeper than off-kilter reproduction. The pop signifiers here exist as ends unto themselves, never fitted into a context in a manner that might put off frissons; songs off the Kinks’ “Village Green Preservation Society” are used in only the most obvious illustrative manner, and when Angel warns an Anglo-Saxon model citizen “This isn’t your village anymore,” the social import stops right there.

But keeping within what you do best—in this case, a self-deprecatingly English tweak on the blockbuster—without letting the stiffness of routine show is, by itself, an accomplishment. True to the established career arc formula for fantasy-film wunderkinds, Wright’s already been granted a Marvel Universe property to direct, but his punchline choice of project, fourth-tier superhero Ant Man, shows that he’s staked out his territory.