Story of My Death 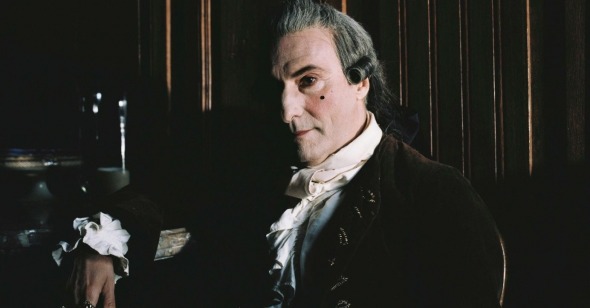 Enlighten Me
By Nick Pinkerton

A thought that occurred to me while watching Albert Serra‚Äôs Story of My Death: the lot of filmmakers traveling the prestige Euro festival circuit is not incomparable to that of the itinerant gentleman of prerevolutionary Europe. Your currency is the letter of introduction, your etiquette upon arrival your proof of belonging. Instead of which spoon to use for dessert and which to use for soup and how to dance a quadrille, ‚Äúetiquette‚ÄĚ in rarefied film circles is a matter of conforming to a number of aesthetic choices that confer proper breeding, a.k.a. influences. This extends to camera movement (as little as possible), non-diegetic soundtracking (same), duration (trying), lighting (naturalistic), performance (ditto, and possibly nonprofessional). When found in one place, the combination is usually referred to as ‚Äúrigor,‚ÄĚ though too often the demands made on an audience are confused with the demands that the filmmakers have made of themselves. (The paradox of pop: hooks are easy to listen to but hard to write.) This world has its true aristocrats, and then it has its foppish mountebanks in paste jewelry. Hence to Story of My Death, set in Europe as the 18th century is turning over to 19th, which won the Golden Leopard from a jury headed by Lav Diaz at the 66th Locarno Film Festival.

After a pre-credits dinner party scene‚ÄĒsoused candlelit dining al fresco‚ÄĒwe‚Äôre introduced to our protagonists, a nameless gentleman (Vicen√ß Altai√≥) and the stocky manservant he‚Äôs in the process of hiring, Pompeu (Llu√≠s Serrat). The gentleman, we quickly learn, is an unapologetic apostate, a former correspondent of Voltaire‚Äôs‚ÄĒthey‚Äôve since had a falling out‚ÄĒand an intimate of the King of Prussia. He is a connoisseur of the arts (Altai√≥ is a well-known figure in the Barcelona gallery scene) and an epicure of unquenchable appetites, whose philosophical observations like ‚ÄúLove is contrary to the tyranny of domesticity‚ÄĚ must find their way out between mouthfuls of fruit and frequent sips of wine. A tireless pleasure-seeker, he goes into giggling fits whenever something happens to tickle his fancy, which is often. An epigram read in a vellum-bound volume sends him into teary-eyed ecstasies. While ensconced beneath the tent of a woman‚Äôs dress, he can be heard gleefully announcing, ‚ÄúHow smothered you are with chocolate . . . A rosary of bonbons.‚ÄĚ When he is squeezing at a monumental bowel movement, a process that is detailed at some length, he seems nearly incapacitated with delight.

All of this takes place in a manor home in Switzerland, the setting of the film‚Äôs first section. Its second, significantly longer, follows our gentleman and Pompeu into the crepuscular countryside beneath the Carpathians. Here our gay rake razzes the superstition of the peasants and practices droit du seigneur among the country lasses. It‚Äôs one of them who will refer to our gentleman for the first time by name, as ‚ÄúCasanova‚ÄĚ‚ÄĒGiacomo, that is, the legendary Venetian lover who crisscrossed Europe at the end of the 18th century, the title of whose multivolume memoirs Serra‚Äôs film‚Äôs title riffs on. Casanova‚Äôs memoirs were previously interpreted onscreen in 1976 by Federico Fellini, who was vocal in his dislike for his subject. Serra‚Äôs feelings are more opaque, sometimes alluringly so: his film is nearest to gaining some traction when it observes Casanova holding court among his social inferiors, shrewd reaction shots raising questions as to whether his captive audience are sharing in his pleasure, or merely tolerating it because they must. (Serra also edited the film, otherwise lugubrious.) But while Serra suspends moral judgment, he does very little to contravene Casanova‚Äôs twice-repeated statement that ‚ÄúAll women are the same‚ÄĚ‚ÄĒnot a one of the abovementioned lasses develops anything approaching an individual identity.

Story of My Death is, however, very little interested in capturing the manners of the period depicted, or the texture and rhythms of life. The dialogue‚ÄĒscripted, unlike that of Serra‚Äôs previous features Honor of the Knights (2006) and Birdsong (2008), though still freely improvised upon‚ÄĒis willfully anachronistic. Far from a legendary raconteur accustomed to singing for his supper, Casanova is a bit of a blowhard and a bore. In his smug, unbending, doctrinaire rationalism, he comes off as something like Bill Maher with face powder and a mouche. He never ceases his labeling and categorizing of every experience, and even drolly provides running commentary on some villagers‚Äô slaughter of an ox. This stands out as nearly the only piece of work that anyone is seen tending to in the film, for unsimulated blood sacrifice confers seriousness of artistic intent, and also provides a cheap way to create foreboding.

Altai√≥ isn‚Äôt playing Casanova, exactly, but the personification of the Enlightenment‚ÄĒI suppose that Giacomo C. was settled on as a nice compromise between De Sade and Diderot. (‚ÄúI only used one dialogue from Casanova‚Äôs memoirs,‚ÄĚ Serra told an interviewer, ‚ÄúEverything else is invented by me.‚ÄĚ) The fact of Casanova‚Äôs symbolic function is fully evident with the appearance of a sort-of opposite number, a nobleman (Eliseu Huertas) with a stern, shriveled face and an extravagant updo, who is intent on recruiting the wenches to serve his own pleasure by way of pick-up lines like ‚ÄúIn my castle, Christianity has no place.‚ÄĚ We only learn his name during the closing credits, which identify this character as Dr√†cula, though his penchant for bloody hickeys gives the game away well beforehand.

The comparison between the serial seducer and the vampire is nothing new; Bernardino Zapponi, the co-scenarist of Fellini‚Äôs Casanova, referred to the character as one ‚Äúwho lives permanently in a mortuary dimension, made of beds that resemble coffins, of funereal apparitions, of old women, in the putrid greenish color of Venice.‚ÄĚ Dr√†cula is Casanova‚Äôs mirror image, but also his inverse. If Casanova is the fading of 18th-century Enlightenment‚ÄĒthe movie, perfectly literal-minded on this point, is full of guttering candles and shots of the countryside in the gloaming, lit by a dying sun‚ÄĒthen that must mean that Dr√†cula is the return of the irrational in 19th-century Romanticism. The conflict is presaged in the Swiss chateau, where one of Casanova‚Äôs companions is a pale, introspective poet (Mike Landscape) very much in the mold of Young Werther. He wears rusty black, while superannuated lecher Casanova clings to the knee breeches and ruffles of another age.

Should there be any lingering doubt that Dr√†cula represents irrationalism, he has a penchant for shattering the film‚Äôs pervasive stillness with an out-of-nowhere existential scream. Serra enjoys this effect so much that he twice has recourse to it‚ÄĒthe second time Dr√†cula victoriously howls over the prone body of Casanova, as a wolf over its prey. I have read a dozen or more of the positive notices that have appeared in the year since Story of My Death emerged at Locarno, and though many express degrees of astonishment and bemusement at the audacity of Serra‚Äôs premise‚ÄĒis it really a world apart from one of those insipid Seth Grahame-Smith parodies?‚ÄĒnot one has given me a sense that the viewer encountered anything of the tragic dimension in this conclusion or, barring that, what they found instead.

Looking for answers after viewing Story of My Death, I had the pleasure of acquainting myself with the fine art of the Albert Serra interview, a showcase for the director‚Äôs particular mixture of self-aggrandizement (touting his incorruptibility, throwing down the gauntlet to critics) and self-pity (over his stated outsider status, as though he was at risk of anything beyond not being able to afford another jacket covered with extraneous leather zippers). Having forgone this pleasure up through screening his latest, I can say that I received Story of My Death in a state of relative ‚Äúpurity‚ÄĚ‚ÄĒan ideal that Serra speaks to at length, a consideration in both his casting of nonprofessionals (like Serrat, who hails from Serra‚Äôs village of Banyoles in Catalonia) and in his shooting technique, in which the introduction of elements of chaos is key. For example: Serra speaks of deciding to ‚Äúchange‚ÄĚ his film‚Äôs aspect ratio from 1.33:1 to 2.35:1 midway through the shoot without informing his cinematographer, a bit like a frontman deciding to fuck with his guitarist‚Äôs pedals in mid-performance.

All of this makes for good copy, though broad generalizations‚ÄĒlike, say, Rationalism Vs. Romanticism‚ÄĒshouldn‚Äôt replace a sensitivity to specifics, and theory (which Serra has loads of) doesn‚Äôt equate with execution (which he doesn‚Äôt). If nothing else, the response to Story of My Death has sufficed to prove that ‚Äúchiaroscuro‚ÄĚ is the only term that most critics remember from their art history classes. But since around 1600 there have been no lack of Caravaggio knock-offs that get everything but his ineffable qualities, and there‚Äôs not an image in this movie that speaks above its monotonous drone‚ÄĒit‚Äôs a baggy, listless thing, cut with neither gravity nor levity, in which rigidly adhered-to tics are passed off as spontaneity. The best I can say for Altai√≥‚Äôs incessant tittering is that it reminded me of Manny Farber on Cassavetes‚Äôs Faces, with its ‚Äúwrong stamping of Americans as compulsive laughers.‚ÄĚ (It‚Äôs far more wearisome here.) As for the Casanova Meets Dracula setup, it‚Äôs something from the Jes√ļs Franco reject pile, though Franco had more of an eye for peasant pulchritude, a better connection for castle rentals, and could do dreamy without drifting into the cataleptic. The movie begs comparisons, practically all of them disparaging‚ÄĒand Serra doesn‚Äôt help matters by likening himself in interviews to Pasolini. Rather than the reckoning brought by Dr√†cula, it‚Äôs Casanova‚Äôs private amusement that lingers after Story of My Death. It‚Äôs so pleased with its own involuted processes that I‚Äôm not sure it wants for an audience at all, and I truly wish I could‚Äôve indulged it.