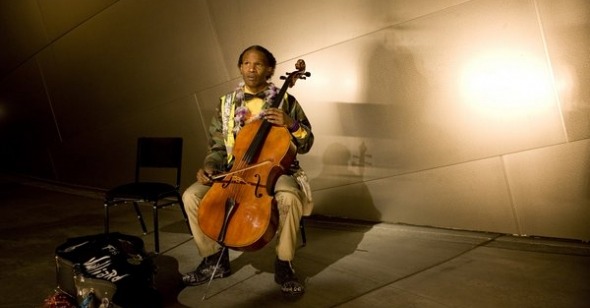 Played Through
by Jeff Reichert

Mark my words: Joe Wright’s fourth feature will be a monster of a movie. At least, it should be. With the first three films of his young career he’s conquered the classic genteel British period adaptation with his superlative Pride & Prejudice, waded into the realm of upper-crust contemporary literati with the clunky, but not unredeemable Atonement, and with his newest, The Soloist, he’s not only navigated a leap to Los Angeles and the Hollywood star system, but managed to inject some sense of individual artistry into the generally rote inspirational buddy-pic drama, one that comes laden with the heavy pathos of a “true” story, no less. If he’s smart, and if The Soloist connects with audiences, he’d do well to push the long takes and odd visual tics sprinkled through his first three features as far as they can go. After all, he’s come this far, and Hollywood can always use more true eccentrics.

The Soloist’s setup is almost unimaginably unappetizing: world-weary Los Angeles Times reporter Steve Lopez, in search of a story for his latest column, stumbles across homeless, schizophrenic busker Nathaniel Anthony Ayers, Jr. bowing a tune in a park near a Beethoven statue and decides, after a few phone calls corroborating the man’s claim that he spent time studying music at Julliard, that’s he’s struck journalistic gold. His first article on the musician is so powerful (though we only hear brief snatches of it in voiceover) that a moved elderly reader sends the paper a spotless cello as a gift for Nathaniel who’s been plying his art with only a busted two-stringed violin. The simple act of delivering the cello leads, of course, to further acts of kindness from Lopez (who Nathaniel calls Mr. Lopez), further columns, city money being dumped into rehabilitating the area in which Nathaniel lives (for better and for ill), and a burgeoning friendship. For the unmoored, sarcastic, divorced (in the movie, not in real life) Lopez, some kind of small redemption isn’t far behind.

Based on Lopez’s encounters with Nathaniel, which abetted a long-running series of columns, and eventually the book from which screenwriter Susannah Grant (In Her Shoes, Erin Brockovich) drew her adaptation, The Soloist is a film that would normally be all about the performers and performances, released in the late-year awards queue amidst a flood of star interviews while the director gamely slinks off to the side. That one leaves the movie thinking less about the troubled conscience of Robert Downey Jr.’s Lopez or the sadly lost mind of Jamie Foxx’s Nathaniel than unexpected things like the plight of Los Angeles’s thousands of homeless, the power of classical music, or the death of print journalism, perhaps explains why we find it hitting theaters in April. Given the attentiveness Wright has shown in his features thus far towards those stories operating around the edges of his main narratives, I’ll ascribe this weighting to him, and if it’s all too much for the budding relationship narrative to handle, the extras make for a nice twist—even if The Soloist itself is somewhat schizoid as a result. Instead of characters alternately touring us along and rubbing our noses in historical and cultural signposts erected like theme park attractions for filmic consumption, Gump-style, The Soloist offers a considered milieu that provides the framework and boundaries for its characters’ relations.

Wright puts more care into a classically scored tracking shot through Los Angeles’s Skid Row or an impromptu group session in which real-life inhabitants of the downtown blight discuss problems with their medicine than he does in working through the beats of the Lopez-Nathaniel story, and it shows. This stuff would be throwaways at best in another filmmaker’s hands—here these brief interjections, not motivated by the needs of narrative, but by a desire to further explicate the context for the main plot line effectively background its two central performances. Though his scattered voiceover tentatively aligns the film with his perspective, Lopez seems almost excluded from the film, and Downey’s hushed turn, generally without theatrics, doesn’t move to reassert any claim over centrality. More surprising is that Foxx, a honey-baked performer to the core, manages to avoid showboating and mockery of the mentally ill. His rapid-fire patter, and constant downward-looking gaze feels a credible approximation of a schizophrenic in society, but his effacing performance only draws attention elsewhere: for better and for worse to the cinematic gee-gaws dreamed up by Wright, the real star of the show. Those cloying moments of structured dramatic conflict (mostly everything with ex-wife/editor Catherine Keener), which fall at their necessary places in the arc, don’t manage to sink the film entirely, even if they do greatly wound it.

Near the film’s midpoint, The Soloist takes a surprising, lengthy detour into the purely abstract. Lopez has arranged for Nathaniel to attend a rehearsal of the Los Angeles Symphony Orchestra. The two sit in the balcony alone while the music keys in and the camera executes portentous tracking maneuvers through the air. All of a sudden, the background surrounding Nathaniel fades to darkness, isolating him in a sea of black. He grows smaller and smaller until the screen is overrun with flashing colored lights that dance in time with the music. Like a choreographed Aurora Borealis, this stab at visually representing the subjective experience of music is lovely to watch, recalling Fantasia in its elegance, 2001 ‘s stargate sequence in its unexpectedness. I’m sure I’ll remember these images well past 2009, and easily well past the film that contains them. (Wright tries something similar earlier in the film, craning up from Nathaniel playing his cello in an underground tunnel to follow the flight of some pigeons through the sun-dappled Los Angeles cityscape—an interesting, but far more cloying attempt at a similar effect.)

Are Wright’s bells and whistles merely posturing? Possibly. And if his stylistic hallmarks weren’t reminiscent of Terence Davies and other classics of European Art Cinema but the bad boy poses of 1990s Amerindie, would I spend any time at all discussing them? Probably not. For now, I’ll chalk it up to a youngish lad’s overeager desire to use cinema to represent anything and everything he can. It’s admirable, even when it fails (he should have ignored the temptation to make us hear the phantom voices plaguing Nathaniel). The attempt to overstuff films has paid dividends in recent years, but if one holds a Joe Wright film up to similar scrutiny as say, something by Paul Thomas Anderson or Arnaud Desplechin, it’s clear that there’s a thin but significant line between the product of a disciplined, if crazy, mind, and the result of a more scattershot process. The Soloist isn’t quite worth recommending for its stylistic tics, performances, or rather hackneyed story—but there is something valuable in the hushed awe with which it views classical music. The last film I can recall that built in complete quiet before a major onslaught of sound and image was the silly ventriloquist horror movie Dead Silence; The Soloist, itself the product of a puppet master, has a far more sophisticated understanding of how to deploy that silence.