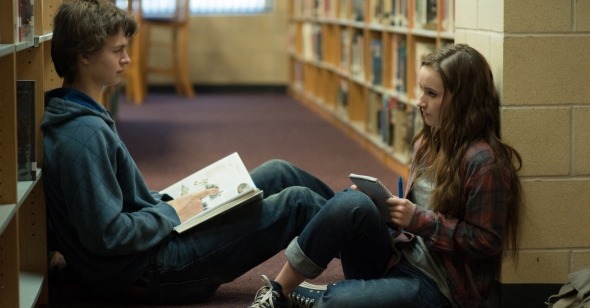 Computers and Blues
By Adam Nayman

David Fincher, Christopher Nolan, and now Jason Reitman‚ÄĒit seems like everybody wants to be Stanley Kubrick these days. Men, Women & Children begins in deep space, with images of the Voyager space probe twirling serenely underneath a crisp, omniscient, scene-setting voiceover by Emma Thompson. It‚Äôs 2001: A Space Odyssey mashed up with Barry Lyndon. But when the camera eventually descends from way, way up in the air and heads down to Earth‚ÄĒmore specifically a Texan football town √† la Friday Night Lights‚ÄĒit lands squarely in Reitmanland, that blasted outpost of mainstream moviemaking situated on a uniquely uncanny valley. In a time when other filmmakers struggle to integrate CGI characters into live-action worlds, this two-time Academy Award nominee has consistently succeeded in fashioning his flesh-and-blood ensembles into cartoon communities.

There are a lot of decent actors in Men, Women & Children, and it‚Äôs only fair to point out that a few of them do good work, namely Judy Greer (an ace with cartoon characters, by the way) and Dean Norris, who manage something like a decent scene together around the movie‚Äôs midpoint. Both of them are playing single parents whose pubescent progeny are having personal struggles; she‚Äôs got a daughter who harbors unreasonable dreams of reality TV stardom (albeit egged on by her failed-actress mom), while he‚Äôs sweating the fact that his star-quarterback son would rather play World of Warcraft alone in his room than suit up for the school team. Misery loves company, and as they bounce their grievances and fears off one another, there‚Äôs a palpable sense of how mutual confusion begets shared attraction‚ÄĒan electric charge that briefly transforms grown-ups into teenagers.

And that‚Äôs it: there‚Äôs nothing else good to say about Men, Women & Children, while the bad things one might say about it are manifold‚ÄĒas evidenced by its rather brutal reception thus far. The film‚Äôs first press screening at the Toronto International Film Festival was a morbidly giddy event, like a boozy wake for a clown. What a difference a decade makes. Beginning with his smug 2005 debut Thank You for Smoking (a gleeful rejoinder to anti-Big Tobacco thrust of The Insider), the director had enfolded an evidently neoconservative worldview in surface signifiers of hip contemporaneity‚ÄĒindie-rock eccentricity in Juno (2007); quasi anti-corporate satire in Up in the Air (2009); post‚ÄďMean Girls/Gone Girl anti-PC posturing in Young Adult (2011)‚ÄĒand been either lavishly praised or else given a pass by liberal reviewers who couldn‚Äôt (or didn‚Äôt want to) look through the movies to their cores.

But Labor Day, about a jittery single mother who literally has to be held hostage in her own home by a hot outlaw to realize her station in life, was so obviously the (peach) pits that nobody went to bat for it. Reitman didn‚Äôt actually do anything wrong(er) on that film; he made the same sort of burnished, fundamentally bogus comedy-drama as usual, except that for whatever reason, the rose colored glasses worn by certain writers when looking at his work came off‚ÄĒand with them came the gloves. To my eyes, nothing in Labor Day was as offensive as the late development in Up in the Air where the suicide of (pace Alessandra Stanley) an Angry Black Woman is 1) used to catalyze the self-actualization of a white-collar henchman played by George Clooney and 2) swept under the rug by Clooney‚Äôs character so as not to jeopardize the career prospects of Anna Kendrick‚Äôs ethical-idiot corporate striver. (And don‚Äôt get me started on the film‚Äôs usage of documentary footage of shit-canned American workers to lubricate its tale of executive-class woe.)

Still, late-breaking comeuppance is better than none at all. As to the question of where Men, Women & Children ranks in its creator‚Äôs oeuvre, the answer is probably somewhere toward the bottom, although this is more a matter of weak dramaturgy than any truly damning stupidity. Basically, in trying to make a movie about how social media inflects and infects every aspect of daily life, Reitman and his co-screenwriter Erica Cressida Wilson (working from a novel by Chad Kultgen) stretch themselves Android-phone skinny: their characters are all refugees from other movies, from the prosperous but loveless middle-aged couple (Adam Sandler and Rosemarie DeWitt) to the wise-beyond-her-years class outcast (Kaitlyn Dever doing a bone-chillingly accurate Ellen Page impression) to the sexless, nattering neighborhood harridan (Jennifer Garner, giving a brilliant performance as The Simpsons‚Äô Helen Lovejoy). Issues addressed include bullying, peer pressure, eating disorders, and helicopter parenting (Garner‚Äôs character is a technophobe who takes her fear of the Internet to extremes; she‚Äôs emblematic of the script‚Äôs hysterical pitch).

The sole storytelling innovation is to pile these individual narratives and hot button topics on top of one another to create a sense of complexity, to which we can say that Paul Haggis got there first. The sole artistic inspiration is to annotate the action with graphical overlays of the characters‚Äô IM and text-message bubbles to which we can say Neveldine/Taylor got there first‚ÄĒin Gamer, to far greater satirical (and much more horrifying) effect. So, even though Men, Women & Children has no shortage of eye-rolling scenes‚ÄĒlike when DeWitt‚Äôs stifled hausfrau uses Ashleymadison.com to score a date and ends up melting like butter in the giant paws of a purring Dennis Haysbert to the velvety strains of vintage soul music (and, fine, one more: Sandler getting all puppy-dog pathetic and paternal in the presence of an $800-per-hour hooker during his own personal journey of secret infidelity)‚ÄĒ it‚Äôs not a particularly remarkable failure. As with Juno‚Äôs cluttered bedrooms and Up in the Air‚Äôs sleek airport lounges, Reitman is able to evoke a sense of crippling insularity (this may or may not be a compliment).

Of course, a truly intimate or small-scale movie is out of the question. Those invocations of Voyager and Carl Sagan‚ÄĒand Thompson‚Äôs narration, which substitutes haughty condescension about the characters and their motivations for Kubrick‚Äôs studied, tragic distance‚ÄĒare hail-mary attempts to get across the theme of ‚Äúuniversality,‚ÄĚ the convenient discovery of which within the narrow confines of American suburbia is a fallacy dating back to American Beauty, this movie‚Äôs true spiritual progenitor even if it pivoted on the possession of consumer-grade video cameras rather than iPhones (it also totally filches the conceit of the teenaged temptress who‚Äôs actually a clueless virgin, except that it holds back on drenching her in rose petals).

Fifteen years on, American Beauty‚Äôs basic formula‚ÄĒpainstakingly ‚Äúrelatable‚ÄĚ upper-middle-class characters concealing anguish from the camera and each other and eventually busted wide open for our pity and delectation‚ÄĒhas endured (and spread to premium-cable television) without getting any more persuasive. It has gotten more familiar, however, and while there could be some dynamic tension between a retrograde dramatic framework and cutting-edge technology, we just get a superficially newfangled variation on the old model. One wonders how many of the writers currently flogging Men, Women & Children for being reactionary‚ÄĒwhich it is, especially at the end, when Sandler smirkingly insinuates that the only way to carry on in this modern world is to pretend nothing‚Äôs wrong and focus on breakfast‚ÄĒfell for American Beauty‚Äôs falsely anti-establishment rhetoric or Up in the Air‚Äôs repugnantly airbrushed elitism. Chances are that the evidence is out there somewhere on the Internet, for all to see. Score one for Jason Reitman.