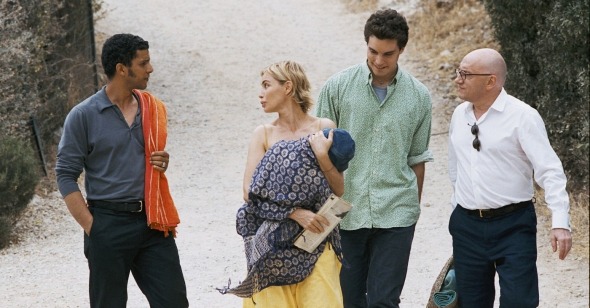 Caught in the Middle
By Michael Koresky

Once again, with his new film The Witnesses, great French filmmaker André Téchiné surveys the intersections of sexuality and politics, while offering up a compelling study in human strength and weakness. Instructive without ever falling into cheap bromides, dramatic without ever veering into overzealous melodrama, The Witnesses is a penetrating, even essential narrative. Téchiné is fascinated by the ways in which lives interact, personalities cross-pollinate, wounds are compounded, exacerbated, or even healed, yet never in that increasingly mundane American style of overlapping stories that prize fate or coincidence; he paints specifically, creating not vague character sketches but full lives, however defined by enigma or contradiction. Here, as in his superlative (and admittedly more vivid) Wild Reeds, Téchiné introduces complicated people who may evolve throughout the course of the narrative but who are also unavoidably wedded to their specific time and place in history.

The nucleus around which all of the characters will move is Manu (newcomer Johan Libéreau), a young fellow from the country with a face as unspoiled as fresh milk who’s just come to Paris, in 1984, to move in with his opera-singer sister (Julie Depardieu). This being an historical drama perched on the edge between the pre and post AIDS eras, Téchiné presents Manu’s after-dark park cruising with devil-may-care abandon; Manu’s first encounter isn’t with an anonymous hook-up, but rather with the middle-aged doctor Adrien (Michel Blanc), who becomes a platonic friend, albeit one who harbors a crush on the neither oblivious nor knowingly manipulative Manu. Complicating matters, Adrien introduces his lovely young thing and avowed spiritual companion to his married friends, writer Sarah (Emmanulle Beart) and vice-squad detective Mehdi (Sami Bouajila), who have just had their first baby. Attractions form in truly unexpected ways, which Téchiné surveys with characteristic nuance and dramatic momentum, and all of which is better not to reveal so as to leave the film’s unfolding, novelistic pleasure intact.

Téchiné works brilliantly with his cast, coaxing an appreciably frazzled depiction of neuroses from Beart, typically given to withdrawn glances and reactive posturing; even her trademark alien glare (bee-stung lips and bug-eyes intact) functions, expressing Sarah’s increasing awareness of strains on both her marriage, as well as the unbridgeable disconnect she feels from her own newborn child. Meanwhile, the constantly undervalued (at least in the U.S.) Bouajila turns in another fine performance, his steely, authoritarian exterior eventually giving way to reservoirs of unguarded erotic energy. This immensely appealing, versatile actor—here nearly unrecognizable in countenance from both his spirited, amiable title role in Ducastel and Martineau’s The Adventures of Felix and his privileged corporate businessman in Arnaud Desplechin’s little-seen Playing In the Company of Men—makes for the film’s most dauntingly complex figure, a Muslim trying to uphold French governmental mandates, at once callous and intuitive, reserved and passionate. Libéreau, meanwhile, remains a willfully, necessarily passive protagonist, a lustrous lust object with a tragic sell-by date.

It’s no surprise that Téchiné balances questions of self-identification through race, gender, profession, and sexuality with such nimbleness, yet he does cut a swathe through it all with some unexpected narrative turns. Even after he seems to have resolved his various strands at the end (which seems as naggingly unresolved as all good dramas should), in his last scene Téchiné provides a terrifically puzzling series of blink-and-miss-them close-ups of his remaining characters, each one betraying unexamined emotions. What’s the meaning of these brief flashes, registering only what the human face can? If only we had another hour to find out.