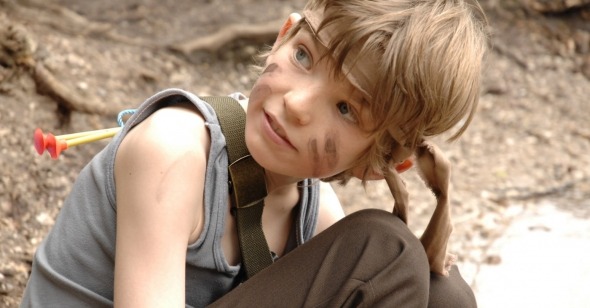 Let’s Go to the Videotape
by Michael Koresky

There’s rarely a moment in Son of Rambow that isn’t polished or primped for prime demographic impact; a whirlwind for those who get nostalgic for British school-chum pictures, Sylvester Stallone actioners, early Eighties camcorders, and breakdance-era outré outfits, Garth Jennings’s ingratiating lark would seem to court snorts of recognition more than active engagement. Yet this backward-looking pint-sized Ed Wood often sails by on the charms of its formula—it’s an appealingly rambunctious boy’s adventure in the guise of a paean to the artistic process (not the other way around). Along with Be Kind Rewind, Jennings’s film may be on the crest of a wave of fondness for the days of videotape, although unlike Michel Gondry’s film, which infantilized a community of urban dwellers by placing them in a cultural vacuum, Rambow uses the creation of taped home movies as a coming-of-age vessel. The children in Rambow, set around 1983 or thereabouts, might as well be wielding digital cameras or pocket-sized cell-phone cams (and in fact, the film might have been less self-consciously precious had it been set in the present).

Slack-jawed, artistically inclined, yet severely repressed by a puritanical religious upbringing, grade-schooler Will Proudfoot (Bill Milner, a prepubescent John Hurt) hesitantly befriends the school’s resident troublemaker Lee Carter (Will Poulter), a proto-Bart Simpson borrowing a camcorder from his brattish older brother and indifferent caretaker, Lawrence (Ed Westwick), to recreate the jungle escapades of Rambo, whose First Blood he has bootlegged from the local theater. Raised without music, television, or movies, Will immediately takes a shine to the dazzlingly violent images Lee shows him (Will’s untapped yearning for excitement is illustrated in a series of violent flipbooks he doodles in his spare time), and, embarking on a rampage of hormone-fueled creation, the two boys record their exploits in a half-improvised narrative of action-movie tropes, even inviting the hugely popular pretty-boy French exchange student and wannabe actor Didier into the fold. The intended outcome: a slot in the local young filmmakers’ contest.

A mite too glossy to vividly depict either the asceticism of Will’s home life (the indifferently directed scenes of the boy and his colorless mama seem like outtakes from Witness) or the grungy video aesthetic they mean to capture in their Rambo cover version (Gondry’s junkyard visuals at least created a terrifically analog wonderland for his characters to play in), Son of Rambow jumps uneasily between gritty and surreal, never quite plumbing the depths of the childhood imagination as winningly as darker though more convincingly fanciful films like Heavenly Creatures or The Butcher Boy. Instead we get some perfunctorily designed sequences using chalky animated graphics to represent the diary-like scribblings of Will’s mind as he runs through the woods, which better approximate show-off techniques of grown-up film artists than a kid’s boundless imagination. And for a period piece so obsessive about specifics, there’s a surfeit of logic gaps (Patrick Swayze name-dropping in 1983? An oddly perfect sound mix on bootlegged video?). Meanwhile, Jennings’s depiction of the wholly alien, red leather–booted, Michael Jackson–aping Didier—shown one too many times at the head of a dorky-cool posse strutting straight for the camera—strikes as rather one-note, a repetitive, rude interruption to Will and Lee’s process rather than a nicely dovetailed subplot.

Thankfully, for a film ostensibly about the nobilities and failures of invented role models (Lawrence, Didier, John Rambo), Son of Rambow stays playful and refreshingly unpreachy, spending most of its time rocketing through the empowering backwoods dangers the boys get into while creating their opus, from near drownings to close calls with at-close-range arrows (no PSA, this). Milner and especially the less blank Poulter (whose freckly, porcine features can easily morph from mischievous to touchingly humbled in the blink of an eye) never fall into Freddie Highmore-esque pathos, and the writer-director refrains from stargazing, dewy appeals to the “magic” of cinema, even at the film’s effectively emotional denouement. Jennings devises a winning closing moment that nimbly ties all of his themes together, and it’s the clincher that will guarantee a bevy of strong reviews: there’s no better way to win the heart of a film critic than by situating the movie theater as a locus of redemption.